Behind the Scenes at GMA's Block Party, Featuring Dierks Bentley

The summer of 2017 held countless barbecues and block parties for DB Congress reps around the country. But there is one block party that brought a few DBC reps together and had the entire nation looking in--and it featured our president, Dierks Bentley.

Dierks knows how to party 🎉 Thanks for an amazing Block Party morning with us in Texas! @dierksbentley #DierksOnGMA 📷: @thetonymorrison/ABC
A post shared by Good Morning America (@goodmorningamerica) on Oct 17, 2017 at 10:34am PDT


On Tuesday, Oct. 17, Good Morning America with King's Hawaiian hosted a Summer Block Party in Austin, Tx. The location was selected as the host site as a result of a contest that was announced in May. Thousands of photo and video entries were submitted, all vying for the chance to host a summer concert with Dierks Bentley, right in their neighborhood. While a DBC member wasn't selected, a handful of reps had the opportunity to attend. It was a morning they will never forget (and the lost sleep was completely worth it).

GMA host Ginger Zee, when gearing up for the show, even had the chance to talk with DBC reps in the audience.

"[Attending the block party] was unplanned and unexpected on my part, so when I found out at 10:30 p.m. the night prior that this was happening, I made the decision that I was just going to be pulling an all-nighter!

What a great experience! Thanks to those that made it happen! #GMABlockParty with @dierksbentley
A post shared by Meredith Mauer (@itsmere1) on Oct 17, 2017 at 6:38am PDT


"I downed a couple cups of coffee, threw on my jeans, boots, Riser hat, and DB Congress sweatshirt before heading out the door for my 2-hour drive. When I reached the neighborhood where the block party was taking place, the whole place looked pretty much asleep. I parked my car, then headed to the stage area on foot, walking by a sleeping [Dierks Bentley] Goldie Bus. It was literally set up in the middle of the street, with homes on both sides. Production equipment and tents were set up in front yards, and there were maybe a dozen people present when I got there. ... Over the next couple hours, I watched a few more people trickle in and listened to the production meeting in front of the stage, so I was able to get a general idea on how this was going to play out.

"The area in front of the stage was set up for VIPs on the left, first responders in the center, and ADA accessible on the right. The area directly behind was for the first 200 people in line with wristbands. The area behind them was pretty much general admission with wristbands. Those who live on the street were given lawn passes, which allowed them to watch the concert from the lawn on the left side of the stage. I'm not exactly sure how many showed up, but I did hear someone mention 1,000 people were expected.

"Once 5 a.m. rolled around, it didn't take long for the crowds to start flooding in. King's Hawaiian sponsored the block party, and provided a fun area for concert goers to grab a water, a sandwich made with their yummy rolls, a t-shirt, sunglasses, and some game fun, such as a giant game of Jenga. Standing on the lawn with those who live on the street, I spent some time talking to a few. I didn't realize that at one point I was standing next to Scott and Ashley Cooper, the winners of the block party. I learned that the block got to enjoy watching Dierks and the guys do a soundcheck the day prior, and Dierks spent some time with the Coopers. 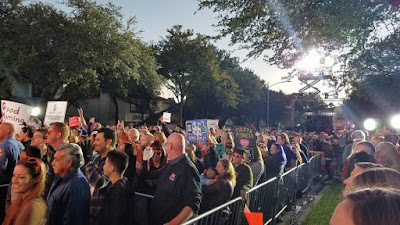 "Once GMA started on the East Coast, things started happening. Without a doubt, it was a production put together for live TV. There was a crew of about 10 people there from GMA New York. There was a live teleprompter attached to the camera near me, and I watched it scroll as Robin Roberts was speaking in NY. ... Before coming to the stage, Dierks was escorted into the crowd to do a quick live shot in the middle of the crowd, saying "GOOD MORNING, AMERICA!"

Honoring the first responders was my highlight of the morning. And this guy's face agrees! 💛💛 #GMABlockParty with @dierksbentley
A post shared by Meredith Mauer (@itsmere1) on Oct 18, 2017 at 4:11am PDT


From there, they took him to the King's Hawaiian party tent, and did another live shot of him playing Jenga with a child from the crowd. Meanwhile, our guys from the band came up on stage for a short soundcheck. From the look on Cassady's face, it looks like they may have just crawled out of bed on a cold, dark morning!

"They warmed up with "I Hold On," with Carlos strumming along using Dierks' guitar. Those of us in the lawn were able to participate in a number of live shots, from the weather with Ginger Zee to Dierks passing between us on the way to the stage. Of course, what was live on television took a few minutes prior to set up. I only participated in the live shot of Dierks heading to the stage. I was standing closest to the stage with my DB Congress sweatshirt on!

This is why no one saw me in the crowd. I was in the lawn next to the stage. #representing @dbcongress #GMABlockParty #DierksonGMA
A post shared by Meredith Mauer (@itsmere1) on Oct 18, 2017 at 3:10am PDT


"Dierks played five songs. He performed "5-1-5-0" while it was still dark out, then talked to the crowd a little bit about his time in the neighborhood. About 18 minutes later, he got on stage and joked about being so cold (it wasn't, really) and the irony of his next song "Somewhere on a Beach" for a GMA live performance. At least the sun was coming up at this point!

Down time #GMABlockParty with @dierksbentley
A post shared by Meredith Mauer (@itsmere1) on Oct 18, 2017 at 3:58am PDT


"He then joined the first responders in front of the stage for some pictures, selfies and a live shot. They were some excited fans! It tickles me to see others appreciate the great guy Dierks is! Soon after, Ginger did a live interview with Dierks from the stage where he praised the first responders, mentioned the tragedy in Las Vegas, talked about the movie "Only The Brave."

Ben being awesome, as usual. #GMABlockParty with @dierksbentley @bhelson
A post shared by Meredith Mauer (@itsmere1) on Oct 18, 2017 at 7:33am PDT


"For the next live shot, they brought the Coopers, their neighbors and the first responders on stage. He performed one more song for the crowd, "Riser," then was whisked away to catch his shuttle to NY for his appearance on Fox News with Dana Perino.

"As the crowd dispersed, I waited to walk back by the buses to my car. I was glad to find my car wasn't towed, and drove off to find my next cup of coffee for the drive home. It was definitely worth the all-nighter!"

THANKS AUSTIN! @dierksbentley #DierksOnGMA
A post shared by Good Morning America (@goodmorningamerica) on Oct 17, 2017 at 6:37am PDT


(You can watch the entire concert here.)

With recent (potential award) buzz about Dierks' hit song, "Hold the Light" for the movie "Only the Brave" and his advocacy for first responders in light of the Las Vegas tragedy, more and more people are learning about the man we already know and love. This was one more way for the DBC and the country to see him in action. What an unforgettable morning!