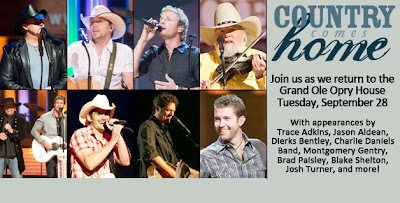 The Grand Ole Opry House announces it's grand re-opening September 28, 2010 after the devasting flood waters in May forced it to close. But The Opry kept on playing at various venues around the city of Nashville. The first show in the GOO House will be a Tuesday night, and boasts an all-star performance cast, including Dierks Bentley, Trace Adkins, Blake Shelton, Jason Aldean, Brad Paisley and more!

Can't be there in person? Listen online at wsmonline.com.
Posted by DB Congress at 11:22 PM