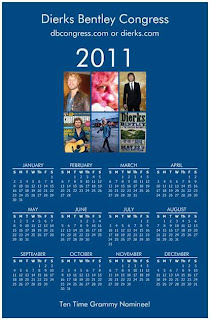 We are happy to announce the winners of the Dierks Bentley Every Mile A Memory Contest!  We asked fans to post their favorite 2010 @DierksBentley memories on our DBC Facebook page for a chance to win a 2011 DB Congress poster calendar.

And the winners are:  Adrian Taylor, Monica Mcmaken, Michelle Woodall, Amy Shepheard, Debbie Hale, Luann Cook, and Andiee Michelle Bentley! Congrats!   Below are their favorite Dierks memories of 2010!
Adrian Taylor My Favorite Dierks Memory was meeting him at Merle Fest 2010. He is truly a remarkable, down to earth guy. He took extra time to take pictures with fans, and even after the photos, as we were walking back stage to the artist r&r tent, he took time to sign more autographs and pictures. He even took time to sit down with some fans and have a snack with them. I worked artist transportation at Merle Fest and  he was really friendly. He sat backstage at a table and ate snacks with some locals...and some fans. I hope he comes back to Merle Fest.  He is by far the best country music artist! I hope to see him again in concert very, very soon. But as for now, I'll let him relax and spend time with his new baby girl.
Monica Mcmaken I wil never forget going to see Billy Idol in August 2010 and looking up to see Dierks Bentley taking the seat right next to me. Dierks and I were pumping our fists in the air together to "Rebel Yell!"
Debbie Hale My favorite 2010 Dierks memory was seeing him at DuQuoin, IL Sept. 1st. I had a M&G and was telling him that my granddaughter was with us and that I had made her a onesie with his picture on it and it said "I heart Dierks." He said he would be looking for her. I was sitting separately from my husband, son, daugher-in-law and granddaughter, Brianna! Brianna was only 11 months old. Well, it was getting close to the end of the show and my husband, Steve, wanted Dierks to see the outfit I had made for Brianna to wear. He took Brianna down to the stage when Dierks was singing Sideways. Dierks sang to her and the crowd went crazy when they saw her. Everyone was cheering when Steve went back to his seat with her. After the show Dierks put the picture of him singing to Brianna on Twitter!! It made a great night even more special!!! Thanks, Dierks!

Amy Shepheard My favorite memory of 2010 has to be connecting with other fan club members from all around the country. I am a pretty shy person, so it takes a lot for me to open up with people I don't know. I'm so glad that I did because I met some fantastic people in Nashville and in New York! I can't wait to see everyone next year! Thanks, Dierks! :-)

Michelle Kinstle Woodall Too many memories this year! Think I followed him everywhere. The Ryman for the final Up On The Ridge concert, where I got the hatch print from the show signed. The Last Call Ball/CD Release party. HullabaLOU in Louisville, Miles and Music for Kids in Nashville, The audience for Good Morning America show, and ending the year at Harrah's in Cherokee. Meet and Greet with Dierks in Louisville and Cherokee, and right up on the stage for GMA show. The miles covered in the thousands and every one of those is a memory that cannot be replaced. Hoping to cover at least as many miles next year. Got to love Dierks!

Andiee Michelle Bentley My Favorite Memory Was When I First Met Dierks♥ I Was A Huge Fan When He First Appeared On 2003. I Was In Like. Third Grade And I Had Dreamed Of Meeting Him For YEARS. So I Went To The Fair With My Best Friend Like, Three Months Ago And I Made A Tshirt That Said I♥ Dierks Bentley And I Was Like, Standing Outside His Tour Bus And He Waved To Me And Idkay I Was So Happy I Started Crying! Then Someone Came Off The Bus And Told Me To Come In And I Freaked Out! I Ran In And He Was Sitting There And I Started Bawling. And He Hugged Me And Said Whats Wrong? And I Was Like I Am Soo Happy I Met You! Ive Been Dreaming Of This Day Since I Was Eight! And He's Like Thats So Sweet! And We Were Talking And It Was Just Amazing(: So He Signed A Picture For Me And Ever Since Then I Want To See Him Again!(:

Congrats again, and if you haven't already, please email me at Ronna@dbcongress with your mailing address!
Posted by DB Congress at 12:41 AM