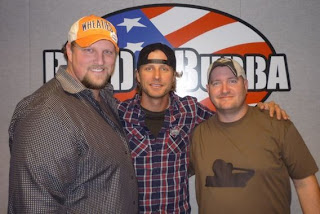 Does Dierks zumba?  Big D and Bubba--who have both been in radio since they were 14 years old-- talk to Dierks Bentley about eating, drinking, losing weight, keeping weight off and zumba? Click here for part one of their radio interview this morning.

Bubba says he can relate to DBs next #1 song, "Am I The Only One?"  Dierks admits he had a Hank Williams, Jr. moment when thinking about writing it (All My Rowdy Friends Have Settled Down). No name for the album yet. "It's not coming out until February, so I gotta make sure I've got just the right title for it."  Did you know Dierks was a pilot? Click here to hear him talk all of this and that and if he feels safe on stage.

In the final audio clip, the guys talk about booties--and not the baby kind--in reference to the line in the song:  "When this country cutie with a rock and roll booty came struttin in through the door."

The guys go on to say, "You would think Dierks Bentley--would drive a Bentley!" NOT!  See below for Big D and Bubba's "Remember when we went for a ride in Dierks truck?" (Big White) from April 2010:

Thanks Big D and Bubba for tweeting DB Congress with the link to the interview! You guys ROCK!
Posted by DB Congress at 9:30 PM

Email ThisBlogThis!Share to TwitterShare to FacebookShare to Pinterest
Labels: Am I The Only One, Big D and Bubba, CNN interview, Dierks Bentley, Hank Williams, interview, Jr., pilot