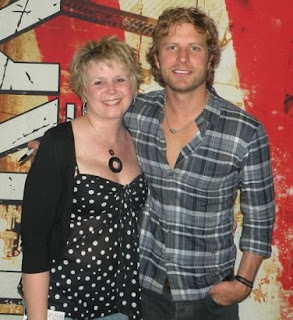 I am sorry to have to bring you sad news today, but we have lost another member of the Dierks Bentley Congress family. Today we honor Melissa Blackard Martin, DBC rep from Cordova, TN, who died Tuesday after a three and a half year battle with cancer.

"Dierks was her favorite," Melissa's Aunt, Lora Moore, told me.  "She loved going to see him and always went if he was near. She would be so happy to know you were doing this [blog].  It also makes me feel so good that you are doing this for her!"

I never met Melissa in person, but after reading Lora's stories about Dierks and Melissa below, I wish I had:

"Melissa and I were very close. I don't know how to describe our relationship. I thought of her as a daughter, sister and good friend.  We would go together to as many Dierks shows that were possible! She won her first Meet and Greet at the Huntsville, AL show in May 2009. She was in remission at the time and was so happy to share her news that she was a cancer survivor! Dierks was sincerely happy for her and that brought her joy!

Later that month, she got the news that the cancer had come back and metastasized to her lungs. Even though she was sick, she wanted to go to Miles and Music For Kids in October 2009, so we did. It turned out to be a beautiful day! Melissa was so excited to meet Dierks at the Harley Davidson dealership! It was a perfect day with friends and the concert was fantastic!

After the concert, walking down Broadway, she spotted Dierks coming out of The Stage. He stopped and talked to us for several minutes. He remembered her and asked how she was doing. As she shared the news that the cancer was back, he expressed his sorrow and said he’d keep her in his prayers. It was a day she never forgot and I am forever thankful to Dierks for making her so happy that day!

She was too sick to make it to the ‘Up on the Ridge’ show at the Ryman, so her mom, Rita and I went and she listened on the phone to the show.

We were able to meet him one more time together at a Meet and Greet in June, 2010 in Tunica, MS and as always, she had a big smile as he asked how she was doing.

In August 2010, she was in remission again and made it to another Miles and Music For Kids event in October with myself and her mom. In December 2010, we got the news the cancer was back in her lungs and brain. She underwent brain surgery to remove tumors, and had full brain radiation and chemotherapy this past year. This past summer, she heard he was playing the Opry and wanted to go, so we surprised her with a front row seat. She could barely walk on a cane, but she pushed and went to see him one last time.

We are so thankful to have had Melissa in our lives and will miss her so much!  Thank you, Dierks, for the memories!"

Melissa was 40 years old when she passed away on Tuesday, December 6, 2011, after a courageous fight with breast cancer, which she chronicled in her Caring Bridge site from the beginning of her diagnosis to the end. By doing this she had one wish: that by sharing her experiences, both good and bad, it might help someone else who was facing this terrible disease or other hardships.

Visitation will be Friday, December 9 from 6 - 9 pm at Shackelford's Funeral Home, Bolivar, Tennessee. Services will be Saturday, December 10 at 11:00 am in the chapel at Shackelford's. Burial will be in the Shandy Cemetery, Bolivar. A fund (Melissa Martin Fund) has been set up for Melissa's children at First South Bank, 809 West Market Street, Bolivar, Tennessee 38008, care of Lora Moore.

A fellow DB Congress rep, Takara (MO), remembers meeting Melissa for the first time at the Dierks show in Tunica, MS.  On behalf of the DB Congress, Takara has volunteered to collect money for flowers and/or donations for the Melissa Martin Fund.
God bless you, Melissa! You're finally home!