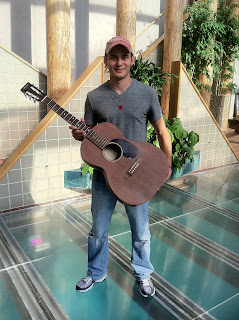 One of our very own DB Congress members, Randy Alan (PA), recently won the amateur artist “Sing Your Heart Out for a Soldier” competition by submitting a video of himself singing the song “Lucky Me” by Helene Cronin.  As we told you before, getting the chance to talk with our president, Dierks Bentley, about his music really encouraged Randy to pursue his dream.

The University of Pittsburgh senior happily shared his story and photos with us! Enjoy!

Back in the middle of June, I saw that Josh Turner was hosting a singing contest where you had to record yourself singing the song “Lucky Me” written by Helene Cronin for a chance to win $10,000, a $300 gift card, and a trip for two to Nashville to stay at the Gaylord Opryland Hotel, and also a trip to a Tuesday night Grand Ole Opry show where the winner would be honored onstage with a giant check presented by Josh Turner and the Opry board members.

So after making the video and uploading it, I found out that I was  a top 10 finalist out of 26 potential videos. After a week of voting and judging by a panel of judges, I was crowned the winner. It was such an amazing achievement because I put so much work into this contest and it all paid off in the end.

So the trip to Nashville took place August 27 through 29, with the Opry show on the 28th on a Tuesday night. I decided to take my mother, Mary Shaffer, on the trip because I wanted her to be there to see me on the Opry stage for the first time in my life. 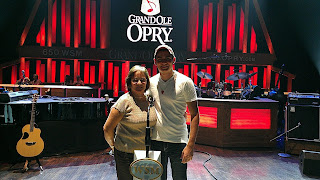 When we arrived in Nashville I already had our schedule mostly planned out of what we were going to be doing, since I’ve been to Nashville numerous times and knew my way around. I should say that the first day we were there (Monday), the highlight was going to the Fontanel Mansion (Barbara Mandrell’s house) and having a personal tour of the place that was put together by my great friends Ron Harman and Steven Whitson.

Steven actually does the tours at the Fontanel Mansion. We explored the whole house with guitars and memorabilia from today’s country artists.  I even got to wear Kenny Chesney’s tour jacket that belonged to him, but one of the greatest honors was to be asked to play in one of the bedrooms, it might have actually been Barbara’s room. But sitting at the foot of the bed and playing the song I won the contest with for everyone in our tour was such an amazing honor that I will never forget. 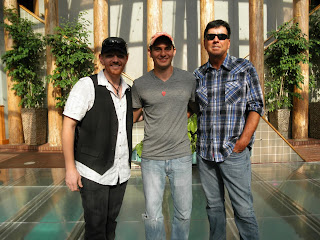 Earlier in the day we went to lunch at the Opry Backstage Grill, where I was asked to play a song on the stage there. Usually an artist has to audition to play there but since I was going to be on the Opry they waived that requirement for me. All the staff there were so nice.  It's a great place to eat and I recommend it to anyone visiting that part of Nashville.

To cap the night off, Ron then took us down to the Country Music Hall of Fame (where he works) and invited us to An Intimate Evening With Eddie Stubbs, who was interviewing Jimmy Newman that night. The show is broadcast over WSM online weekly.

One individual that I was introduced to that night was Grand Ole Opry member Jan Howard. We sat together as we watched the interview taking place a few rows down on the stage, but between commercial breaks Jan would tell me stories of how she sang the background vocals on Johnny Cash songs (specifically “The Ring of Fire”), how she sang a duet with Bill Anderson that went to number 1, “For Loving You,” and also that she was the one who sang the demo tape for the Patsy Cline hit “I Fall to Pieces.”

Ron had showed her the video of me singing the song for the contest and she loved my voice and what I did with the song. One of the main pieces of advice she gave me was to “surround yourself with people you can trust.”

After the interview, I was introduced to Eddie Stubbs and got to chat with him for bit, telling him about my career and how I am just finishing up college.   He said “that degree is an important thing, you are smart for getting your degree before coming down here.”  I also got chat with Jimmy Newman as well who told me that “you have a great smile. Keep on smiling every day because a smile is a contagious thing.”

After that my mother, Ron, Jan, Kelsey Hodges (DB Congress member), and my two cousins Brittany and Stephannie Cantrell (who came up from Mississippi to see me!), left and went to lower Broadway for a bit then headed back to the hotel to get some rest for the show the next day. Monday was an intense day since we started the day at 4 a.m. Eastern time and ended the day at 1 a.m. Central time.

Tuesday started off by going out to visit Richard’s and Southern, a family owned Merchandising Company who does all the merchandise for big name country artists such as Kenny Chesney, Luke Bryan and others.  They were the ones who made my t-shirts for my merchandise. Actually when we arrived they had just got done unloading Kenny’s merchandise from this year’s tour and were printing Luke Bryan and Justin Moore shirts.

The owners are great friends of mine and such nice people. So we took a tour of the place and met everyone that works there.  It was really nice to see the behind the scenes of what went into making my shirts as well as other country music artists. After that visit we headed back to Opryland to get ready for the show.

When we arrived at the Opry we were instructed to park in the back where the artists and backstage crew park. As we walked toward the entrance, we were greeted by an Opry staff member who was going to escort us into the backstage area and give us a little mini tour while the first act was going on. We got to check out every dressing room there, which had a different theme in each one.

I also was able to go out on stage while the stage crew was finishing setting up, and stand in the famous Opry Circle! As I touched the hardwood floor in the circle I thought about all the great country artists who are my heroes who stood in that circle. For an artist like me, that was an awesome experience that I won’t forget as well. 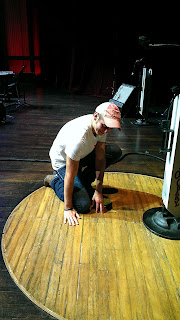 Backstage we ran into many people and artists, Johnny Lee, Thomas Rhett, Chris Young, and then I finally met Josh Turner. We went into one of the dressing rooms with Josh and got to talk for about 10 minutes. He was even nice enough to give my mom and I some CD’s, hats, and t-shirts. The one piece of advice Josh gave me was to “surround yourself with people you can trust and who will represent you in your career.”  He also signed a poster for me saying to “keep on singing!”

After we chatted we then took some promotional photos for the Opry together and then he went to get ready for his set. So my mom and I went to our seats and watched Chris Young play for a bit, then as Josh was going on I was brought backstage again to go over what was going to happen for my award presentation.

In the process I had the privilege of meeting Pete Fisher, Grand Ole Opry VP and General Manager, who said, “We’ll be keeping an eye out for you in the near future,” and Bill Cody, who was announcing that night.

Once Josh was done with his third song, Bill then introduced me to the Opry crowd and I stood in the spotlight with Josh and Bill holding my check. Josh even held up my hand while the crowd was clapping. It was such an amazing feeling to be there on that stage with my family and friends watching. All I can say is I will never forget my first trip to Opry ever. What an experience and blessing from God it was. I met so many great people who believe in what I am doing. 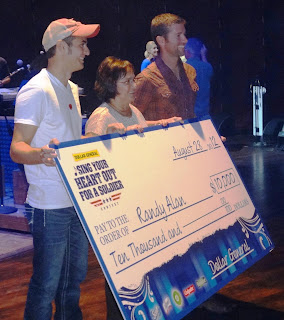 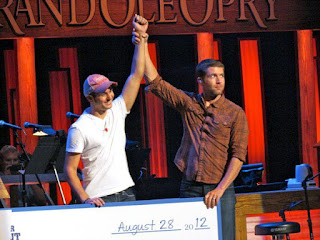 Just before leaving on Wednesday, I was able to have lunch at the Opry Backstage Grill with Opry member Jeannie Seely who is from my hometown area of Northwest PA. Jeannie is known for her 1966 Grammy award-winning Country hit, "Don't Touch Me" along with many other numerous country hits. Getting the chance to sit down and talk with her was so refreshing. She is an amazing individual with a great perspective on life. To hear her stories of what she’s done and been through just blows me away. I was blessed to have a quote from Jeannie in a recent article about me where she said the following,

“His presence as a person renews all your faith in young people. He embraces the history of country music, and he can add to its future.” 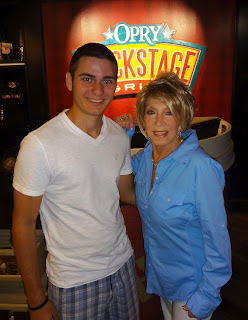 As we were leaving, someone recognized Jeannie, but then also recognized me from the Opry show. They even saw me on TV when I was on The Singing Bee on CMT. We took some pictures with them and chatted for a bit, but I just thought that was really funny they recognized me and my name.

As I finish college up this year I’m excited about the next chapter of my life. My plans are to get a job in Nashville and make the move down there in the summer. I’ve met some remarkable people that have changed my life forever and made some lifelong friends who will be there for me as I make the transition to Music City.

When people ask me why I decided to pursue music, I just tell them what music did to me. Country music spoke to me throughout my life; when times were good and when they were tough.

I believe country music speaks from the heart and really is about things that everyone goes through in life. For me it was people like Dierks, Kenny, George, Tim, and countless others who changed my life through music. My goal is to change the lives of people with my music the way that all those artists changed mine.


Here's the video of Josh Turner presenting Randy with his check:


Randy is performing October 14 at the Conneaut Lake Pumpkin Fest, Conneaut Lake, PA.  You can check out his website here and follow him on Twitter @randyalan99.