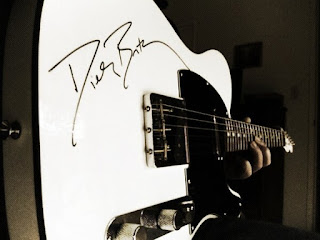 Hard core, DB Congress fan club members have been singing along to those lyrics from Dierks Bentley's top 5 song, "Trying To Stop Your Leaving" for years, never dreaming they would be acting out the words for real--on stage with the man himself!

Seems Dierks, along with a little help from Fender Guitars, is showing lots of love for his myriad minions in every show of the Locked and Re-loaded tour with Miranda Lambert.  It's as if he's "thanking" his loyal fan club members by bringing them up on stage and giving them a special experience--an experience of a lifetime--during "Lot of Leavin' Left To Do."

And even though the two songs both have "leaving" in the title, DBCers sure are "staying" up on stage, rocking out with the boys in the band for the rest of the song on his red #7 Fender Custom Thinline (*thanks, Dr. Feasby)!

At the end of the show, Dierks brings out a fresh Fender Telecaster, autographs it, and hands it to the 'with the band' member of the night.

The fans aren't the only ones enjoying this streak of giving.  Dierks is getting a lot out of it as well.  He was so taken by one girl's reaction, he made it his Twitter (@DierksBentley) profile photo:


We told you about the first guitar give-away in Knoxville, Kentucky to DB Congress member, David. Here are a few more stories below.  Who will be next?

This was her second DB stage experience.  The Illinois DBC rep has been known as 'Stage-dive Stacy' ever since she took a leap of faith with Dierks six years ago.


"Dierks is the best to his fans and if I wasn't already, I'll be a fan for life." 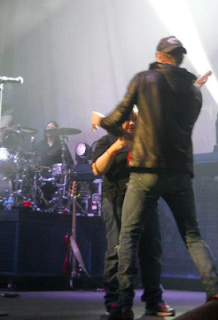 She doesn't remember much about being on stage...

"It all happened so fast. I went to the Baltimore show by myself, got there at 2 pm and doors opened at 7 pm. I got in the corner of the stage and pit on the left side of the stage. I had a sign that stated I drove 10 hours just to see him (from KY). 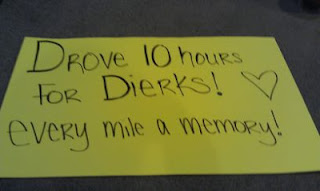 During "Lot Of Leavin' Left To Do" he took my sign, showed it to the cameraman and then reached his hand out. I said, "Are you serious?" and he laughed and said "C'mon!" I, not so graciously, climbed on stage where he put his guitar around me. I have never touched a guitar and I was so nervous that I was strumming the wrong part so he had to grab my hand and put it in the right spot. No idea how long I was playing but I saw him staring at me, and I asked him if he needed his guitar back. He gave me the biggest hug and escorted me off stage. 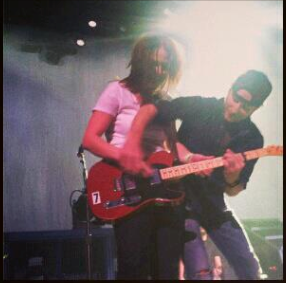 Afterward they brought out a guitar, he knelt down in front of me and signed it and gave it to me. Since I was by myself and not in the greatest part of town I had 3 security guards walk me to my car. Best day of my life!"

It must have been the shirt.....that earned him a trip to the stage.

David tweeted to Dierks the next day: "Dude, when I showed my 12 year-old son the guitar, he said, 'That's so cool, Dierks made your dream come true!' He was right! Ty Bro."   David also tweeted that the best part of the show was not getting pulled on stage, not getting a guitar, but watching Dierks shed a tear for his dad when he sang his new song, "I Hold On."


Dierks knows how many miles his fans travel to see him.  He knows we get there early and stand in line for hours in the cold, heat, sleet, rain and snow--just to secure that front row, elbows on the stage, spot in the pit.  He knows we do all that to have that 'come a little closer' moment with our number one artist.

He knows how much we support and promote him every day in between shows.  And this is his way of recognizing our dedication and showing his appreciation!

We love ya, dude!