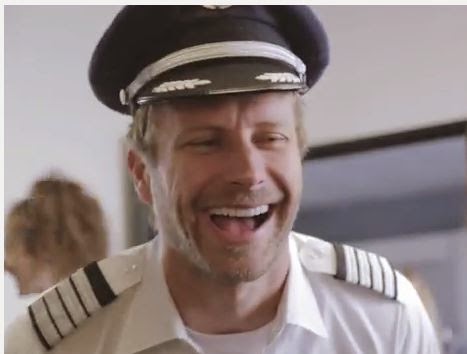 Dierks Bentley boarded a plane to film his music video for his latest single, Drunk On A Plane, that's skyrocketing up the charts (#11 on itunes!). He took on dual roles as mustached Captain/pilot and he plays himself as a guitar-playing passenger, complete with fan girls taking selfies with him.

Dierks says the video was shot in California "in this crazy warehouse that has all these old planes torn down and put back together so we can shoot airplane footage. Since the day I wrote this song, I've been thinking about this video...,"   directed by Wes Edwards (5-1-5-0, Tip It On Back).

All of DB's band members except one (we missed you Dan!) are featured: Steve Misamore (drums) plays the co-captain/pilot; Tim Sergent (steel) is a passenger with spiked-hair Brian Layson seated next to him. Then there's Sergei Mariposa the flight attendant, aka bass player, Cassady Feasby, who nearly steals the spotlight!

The story line follows the lyrics of the song, making it come vividly to life up in the clouds! The gilted groom, comedian/actor Jeff Dye (Comedy Central, Extreme Makeover Home Edition), tapes a picture of his ex to the seat back right beside him, but he finds new love with passenger actor Emma Fitzpatrick (The Social Network) after getting drunk on a plane.

The Riser Air flight takes a nose dive when the pilots (aka, Dierks and Steve) turn on the auto pilot to join the fun in the cabin. But when pilot Dierks gets knocked out from a falling suitcase, the real Dierks saves the day! In a preview video, Dierks was practicing his role to take over the plane by rehearsing in the mirror: "You're good enough, you're strong enough, you can land this plane."

Check out the video below and vote for it on CMT and GACTV!