On The Set Of Dierks Bentley's New Video, 'Home' 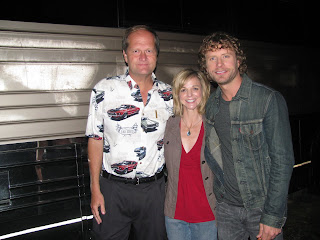 I won the chance to be on the set of a Dierks Bentley video through the Leukemia and Lymphoma Society auction.  The video shoot took place Tuesday night in a soybean field on a farm just outside Nashville.  My husband, Lloyd, and I were brought onto the set by Joanna Carter, VP of Creative Services at Capitol Nashville.  She gave us the explanation for the treatment of this video which is:


Dierks singing in a field with an acoutistic guitar.  Then there will be fireworks that illuminate the sky, and as they explode, images will form in the sky, images that tell the story of our country from who we are as a people to the beautiful landscape.  It will then cut away to people all across America taking notice of what's happening in the sky.

So we watched as Dierks played his song in the field about  20 times or so, so they could get different angles.   We got to talk to him briefly between takes.  I asked him who decides what the next single will be,  and he said that in this particular case, Capitol Records did, which he said was just fine with him because he trusts their choices.   He said the song and video should be out in a couple of weeks.

After Dierks performance part was over, he left and so did we.  It was about 2:00 a.m., but the crew was still going to be there filming the fireworks and b-rolls until 4:00!  (b-rolls, I discovered, are the filming of anything other than the main artist, i.e., background, extras, anything without Dierks.)

Joanna was very nice and has worked for Capitol Records Nashville for 18 years.  She is on the set of every video filmed by a Capitol artist, and has been on every set of Dierks's videos.  She told us her favorite one was Long Trip Alone, though being a woman in a Mexican prison was a little scary!  I told her I always love the ones where Jake and George make an apprearance.

While on the set, we also met Dierks's beautiful wife, Cassidy.  She was very nice.  We talked about the Kentucky Derby and how they get wonderful invitations to go, but Dierks always has a gig.  We talked dogs, and she said that they thought about bringing them [Jake and George] because when they get home, the dogs will bark and might wake up their little girls.  She also said Jake and George like going to "camp" when the family is on the road.

Here are some pictures from the shoot (it was hard to get good ones because it was so dark.) 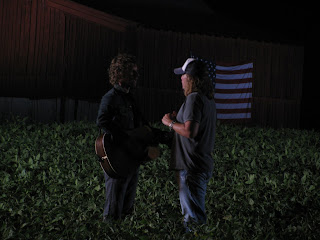 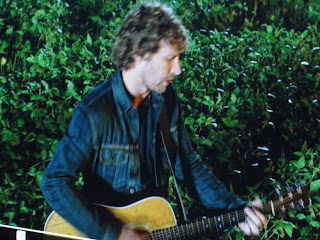 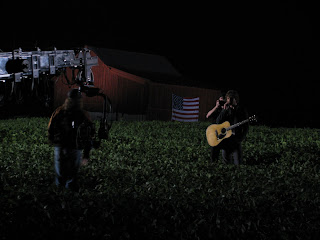 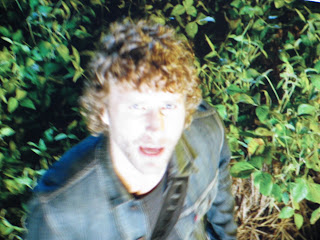 One of the highlights of this experience was finding out that Dawn Gates, Senior Director of New Media at Capitol Records, raised $50,000.00 for LLS! Way to go!