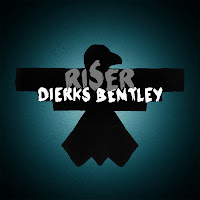 The day Dierks Bentley announced his new album, Riser, scheduled for a fall release, Twitter was all a buzz with excitement.  We started seeing Travis Meadows and Steve Moakler pop up in tweets with Dierks' name and the title of the album, which comes from a cut they wrote called, "Riser." It's a song about going through tough times, getting knocked down and fighting to get back up again and rise above it all.

It's also the first title song of an album since Modern Day Drifter that Dierks has not been a co-writer. But its a perfect match for Dierks, following the year of his father's death.

A few tweets and emails later and both songwriters agreed to answer a few questions for DB Congress about "Riser!"

"We are on a journey, the endless cycle of life, love, loss, faith, freedom and family...We learn from our past, to define our future. Everyone has a defining moment in their life, a breakthrough moment, the moment you choose to be...a riser."


First up is Travis Meadows, whose Twitter bio says, "Riding comfortably under the radar," but don't let that fool you.  He's been through cancer, chemo, alcohol, drugs and more, but his talent pushed him to rise above it all.  Landing cuts with Jake Owen, Ronnie Dunn and Lee Ann Womack, and singing with raw emotion on his own albums, Travis is a true talent. Oh, and happy early birthday to Travis, Thursday, May 23!

DBC: What was your reaction when you heard Dierks Bentley was recording your song?

TM: I was blown away. I've been a fan of Dierks since I heard Lot Of Leavin Left To Do.

DBC:  What was co-writing with Steve Moakler like? Have you written together previously? What songs?

TM:  Steve is a great guy. He is young and very optimistic. We write great songs together. The first song we wrote together is "Wide Open" on my Old Ghosts and Unfinished Business album. I think he may record it, too.

TM: Steve and I both write at Kobalt Music Publishing. Jeff Skaggs is one of the song pluggers there. I'm pretty sure he played it for the Dierks' camp.

TM: I only heard it once but it was magic. They kept a lot of the vibe from my original demo but Dierks masterfully made it feel like his own. That’s what a true artist does.

TM: Hearing him sing it made me very proud to do what I do for a living.

TM: After hearing about the passing of Dierks’ dad it makes it even more special. I had the title track on a Lynyrd Skynyrd record a while back. This is even more meaningful to me because I've had a lot of personal challenges that I have lived through that make this record such a gift to me.

DBC: Tell us about the backstory –was the song inspired by any specific events? You just released your own EP, “Old Ghosts and Unfinished Business,” on May 7. Did you consider including ‘Riser’ on that compilation? It seems to fit the mood of the other 7 songs.

TM:  I always write like I'm working on my next record, because I write better songs when I do. When I try to predict what Dierks or Tim McGraw or whoever, wants to hear, those songs suck. I did in fact consider this track for the Old Ghosts and Unfinished Business record but I decided against it along with Jeremy Spillman who produced it. I'm glad we didn't put it on there now because Dierks killed it!

DBC: You also released “Killin’ Uncle Buzzy” in 2011. One of the reviews said, “Do your soul a favor, buy this album and listen to the whole thing start to finish—if you’re not moved I’ll give you $10.” What do you think about that?

TM:  I have made a lot mistakes in my life. There are two things in it that I am positive I did right. My son Josiah and Killin Uncle Buzzy. That record documents me getting sober and essentially getting my life back. I bled that record and anybody that hears it hears the honesty and it cuts straight to the heart. It touches me that it touches so many others.

DBC: How interesting that you used to tour with Keith Thibodeaux (Little Ricky on 'I Love Lucy'). What was that like?

TM: Keith is an amazing man. We used to play in a couple of bands together and he is the best drummer in the world period.

DBC: Where did you grow up? When/why did you move to Nashville?

TM: I grew up in Jackson, Mississippi. I moved here about ten years ago because I had two things on my list of thing to do before I die. One of which was to see if I could write with the best writers in the world and make a go of it.

DBC:   You’ve had many songs cut by well-known contemporary Christian artists, with a number one – Should’ve Been Lovin’ You-- cut by Jonathon Pierce, winning you an ASCAP Award in 2001—congratulations! How much of a chance do you feel ‘Riser’ has at getting to the number one country spot?

TM: I gave up on guessing what songs will do great and which ones won't. These days I leave it up to the people listening to the radio. I write every song as if it is the last one I will write and work very hard to make it great. Dierks is a star and a heck of a singer. I hope it is the biggest song either one of us has ever had.

TM: Jake Owen, Lynyrd Skynyrd, Ronnie Dunn, Lee Ann Womack and High Valley to name a few. Also had a nice string of David and Giants back in the day on Christian radio.

DBC: Watching the video of you performing ‘Riser’ at the Red Clay Theater, I couldn’t click repeat fast enough! Your delivery of the line, “and honey I’m a fighter” was so powerful. Your voice sounds like a cross between Will Hoge and Bruce Springsteen (that’s a compliment!) Why haven’t we heard you on country radio?

TM: Maybe I started too late. I spent a lot of time in my 20's and 30's singing in churches and not pursuing country music. That was before the big fall. Several trips to rehab and jail later here I am making records playing shows for anybody that will listen.

DBC: A favorite part of the song is the bridge: “I’m a try-er// I’m a get down low so I can lift you higher//An army couldn’t keep back my desire.” How did that line come about?

TM: Me and Steve were in the middle of writing it and we knew we needed a few different words there. And they just kinda came out. Not sure where from.

TM: I got to write with him because of the song. It was a great day. We talked about love and our kids mostly. Sappy I know.

TM: I wish I did because I have this gut feeling it’s gonna be his biggest one yet. He deserves it.