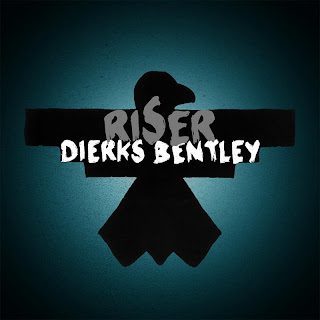 Today information was released about Dierks Bentley's 7th studio album, due this Fall. The album, titled Riser, promises to be his most personal yet, according to the press release. The title of the album comes from the song "I'm a Riser" that will be included on the set, and here's what Dierks has to say about the inspiration behind it:


“Life in general has a way of knocking you down,” Bentley says. “It’s different reasons for different folks – could be personal reasons, could be family reasons, your job, drugs, alcohol. That song really applies to anybody that’s lived. There have always been those moments when we have to get back up and get on our feet. They are defining moments…breakthrough moments.”

The album also finds Dierks going back to his roots, if you will, enlisting the help of executive producer Arturo Beunahora, Jr who produced his first two albums: the critically acclaimed self-titled debut, and equally acclaimed Modern Day Drifter.  Dierks also enlisted production assistance from Ross Copperman, who you'll remember was one of the songwriters for Dierks' most recent Top-5 hit "Tip it on Back."

You can read all about Riser here, and if you'd like to download the Riser logo (shown above) to be your Facebook or Twitter profile picture, you can go to Dierks.com. And here's a video teaser for the album as well!

In addition to exciting album news, rumor has it the lead single from the album is a tune called "Bourbon in Kentucky," written by Hillary Lindsey, Gordie Sampson, and Ryan Tyndell. Many thanks to CA DBC Rep Kristin Toon for tweeting the info and for asking about the song title in her m&g with Dierks on Saturday night! I've looked all over the web to find a video or audio link to the demo of the song, but unfortunately I haven't been able to find it. What I have been able to find, however, are a lot of positive comments about the song, and it sounds like a line in the chorus is "there's not enough bourbon in Kentucky to make me forget about you." Sounds like we might have a good old-fashioned heartbroke country song on our hands! Look for "Bourbon in Kentucky" to hit radio in the next few weeks - we'll keep you posted as soon as we know the exact date it's going to radio.

As for the songwriters, they are no strangers to the #1 spot on the charts, having penned such songs as Lady A's "American Honey," Sara Evans' "A Little Bit Stronger," Gary Allen's "Every Storm (Runs Out of  Rain)," and Eric Church's MASSIVE hit "Springsteen." Hopefully they'll be able to score another chart-topper with this new song from Dierks!

We hope you're as excited for this album and single news as we are, Congress! The rest of 2013 is looking to be exciting times in the world of Dierks. Stay tuned right here for all the latest news!