Dierks Bentley Rallies to Raise over $476,000 for 19 Fallen Firefighters 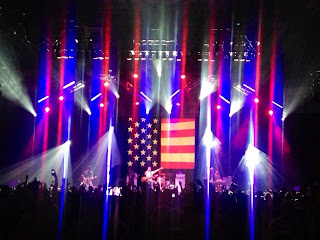 With just over a week to organize the event, Arizona native Dierks Bentley led the charge with the help of The New KMLE Country @ 107.9, 92.9 KAFF Country and artist friends The Band Perry, Randy Houser and David Nail.

KMLE interviews Dierks in this video:

Family members of the 19 firefighters and the sole surviving firefighter were in attendance at the event in an emotional yet celebratory night of music. Bentley honored the fallen firefighters with a photo tribute during his first-ever performance of brand new song "Here On Earth" and kicked off a special version of "Home" with a bagpipe intro by the Rural Metro Pipe and Drum Corp.

Many DB Congress were in attendance repping the fan club and supporting the cause.  California Rep, David Watts, won last minute tickets to the fundraiser.  He tweeted from the show:

"@dbcongress Hey...Did I mention @DierksBentley did a new song off #RISER?! #HereOnEarth. There wasn't a dry eye in the house."

Dierks holds up the check for $442,000 but that didn't include all the t-shirt sales and donations, and an on stage auction where two guitars signed by all the performers each going for around $25,000.

Click here to see more photos from the show.

All money raised from the event will go to the United Phoenix Firefighters Charities who will directly distribute to the families of the 19 fallen firefighters. For more information, visit www.dierks.com.
Posted by DB Congress at 6:33 AM