Holding on to a second consecutive year of hosting duties for the ACM Honors, Dierks Bentley was "blending informality and irreverence made possible by the lack of network television cameras with a genuine appreciation of the night's award winners," according to USA Today.

DB Congress Reps were in the audience and shared their impressions of the evening:

Kelsey Hodges - TN
Dierks was so great Tuesday night, he definitely needs to host more shows! He said he was going to join Blake and Luke with the ACMs next year as "Blierks!" haha. He opened the show with "I Hold On," then a performance with Ricky Skaggs to honor Keith Whitley which was out of this world. It was an amazing night, and, it was also cool to share the night with other Congress members!


Mariana Bowring - GA
Dierks was such an awesome host! He opened singing "I Hold On" which really set the mood for the rest of the night in a great way! He kept the show moving right along delivering all his lines strongly and always throwing in some humor whether it was poking fun at Lady A or how much beer he'd been drinking! Later in the night he sang an awesome duet with Ricky Skaggs and then sang a song in tribute Keith Whitley which was beautiful! After the show was able to catch him as he was headed to his truck and got him to sign my hat! Awesome night!

Cecia Guidry Benoit - LA
I had a wonderful night! Dierks really started the show off with a bang by playing "I hold On" and also sang a duet with Ricky Skaggs, "Don't Cheat In My Hometown" AND the BIGGEST highlight was when Dierks sang "I'm Over You" as a tribute to the great Keith Whitley!
Cecia drove right back home so she could see Dierks in Mississippi Wednesday night!


Among the honorees were Blake Shelton and Lady A, and both had tweets for Dierks afterward:

Dierks was equally excited and tweeted a pre-show prep photo: 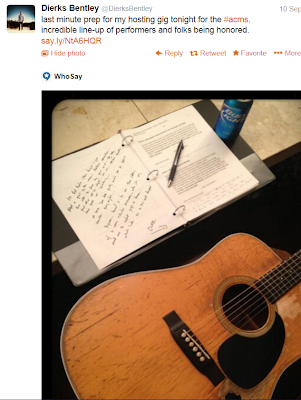 And Ricky Scaggs had kinds words for Dierks too!

Honorees included a few studio musicians who have played on several of Dierks' album cuts:  Aubrey Haynie (Fiddle Player of the Year) and Guitarist of the Year J.T. Corenflos.