Thursday night, Dierks Bentley and OneRepublic took the stage at Rocketown in Nashville for a CMT Crossroads taping in front of a live audience.  DB Congress reps Amanda, Randy and Kelsey and other DBC members had the good fortune to be there in person!

"Right now with our friends and @DierksBentley doing @CMT Crossroads! Hellz to tha ya pic.twitter.com/tvfBIpgWe3 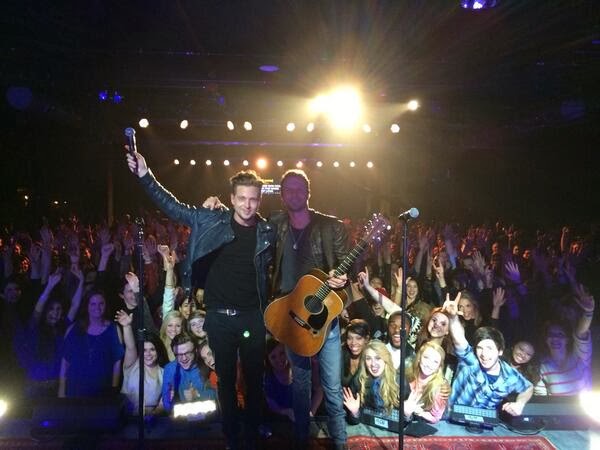 Can't wait for CMT to air this episode mid March?  Read the highlights below and watch the video that won't be on the show.


Amanda (MS):
Dierks and OneRepublic were a great pairing for CMT Crossroads. I loved how they all were having as much fun as the crowd! They joked with each other and told stories between taping. It was the best Crossroads I've attended! They did a mash up of songs at the end that was just for fun and won't be included on the show.

They sang Free And Easy, I Hold On, Up On The Ridge, and Home from Dierks' catalog. Of OneRepublic's they did Counting Stars, Stop and Stare and Apologize. The mash-up even had some Justin Timberlake!

Randy (TN)
The bonus performance of Dierks Bentley and Ryan Tedder  from OneRepublic:

Dierks recalled times about playing the bars in downtown Nashville like Robert's. Ryan from OneRepublic talked about how he used to live in Franklin, TN and one of his favorite places to go was Waffle House. He started his musical journey in the early days of his career when he lived in Nashville, it was a big influence on him. Dierks was so pumped to play with OneRepublic, he would take time to say, "I just sang 'Apologize' with One Republic!" during breaks and yell at the floor in excitement.

Dierks' energy was through the roof last night, jumping around on the stage and having a blast. He even jumped into the crowd towards the end of the show. The last song that Dierks and Ryan sang was "Pride (In The Name Of Love)" a U2 cover.

The two superstars recalled their first concert they ever went to. Dierks had a connection with the drummer from OneRepublic in that the drummer went to the U2 concert that was in Arizona (Dierks' home state). Dierks' sister was planning to take him but instead took a friend of hers so Dierks did not get to go. Dierks' first major concert he ever attended was a Bon Jovi show. He recalled there being a girl next to him at that first show in a black leather top.  He made the joke it was more like just a piece of leather but that he couldn't stop looking at her. When Dierks got the chance to open for Bon Jovi he recalled that at that first show all he did was watch that girl for most of the show. Bon Jovi told Dierks that it must have been a great show then to have women like that show up.

Then we got to hang out with the man himself! Look for us on TV on March 21st for CMT Crossroads. We were front and center with the spotlight on us the whole time.

Kelsey (TN)
The other song OneRepublic sang was "Good Life." I have never seen Dierks so hyped up before, it was awesome because it made us even more hyped. Dierks said it was surreal from running on the treadmill listening to these guys to jamming with them live. It was obvious Dierks was a true fan--kind of fangirling! Dierks crowd-surfed right on top of us. The two had great chemistry and it was a night I'll never forget!