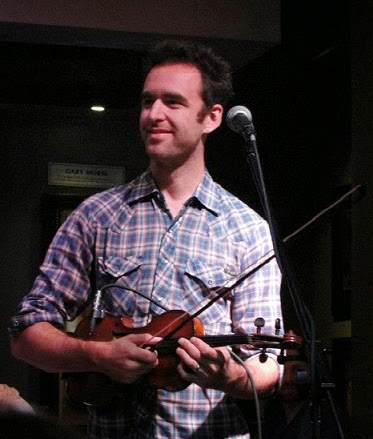 Our last interview with Dierks Bentley's fiddle player, Dan Hochhalter, was in 2010, a month after he joined Team Dierks. Dan graciously agreed to play catch up with us and answer a few questions, in between the busy Riser release activities.

Dan tells us about his favorite song to sing live, what he's learned from Dierks and what Dierks has learned from him, he reveals the songs on the Riser album that he played on, and much more.

The fiddle is your main instrument—thus the nickname “Fiddlin’ Dan.”  But you also play some guitar, mandolin, banjo and ganjo (6-string banjo).  We noticed Dierks is trying to learn the banjo—what lessons are you teaching him?

Honestly, Dierks and I both started learning the 5-string banjo around the same time. I was visiting my family up in Minnesota a few summers ago, and a friend of mine had a banjo that he wanted me to take back to Nashville and get appraised. So I took his banjo back to Nashville with me and soon found myself messing around with it at home and on the bus. I think it piqued everyone's curiosity because after a few days, Dierks, Steve [Misamore, drummer], and I all were learning how to play. So, I don't know if there are any banjo lessons that I've been able to teach Dierks (or anyone!), but Tim [Sergent, steel guitar, banjo] has taught all of us a lot since he's played the banjo his whole life.

You recently posted a photo of your guitar you’ve had since you were 16 years old.  In fact, it made its Grand Ole Opry debut on February 7th! That’s amazing you still have it!  Talk about how you came to acquire it, and how did it feel playing it on the Opry for the first time?

When I was 16, I bought the guitar that you are referring to. I already had a cheap acoustic that I'd had for a year or two and wanted to get an electric guitar, so I used money that I had saved from working my summer job (construction) and doing gigs with local bands to buy it. It's an interesting instrument because Fender only made the model I wound up buying for a few years. It's an American Standard Deluxe Telecaster with two Tele pickups and a Strat pickup in the middle. Some of the first songs I learned how to play were classic country songs, so playing that guitar on the same stage where a lot of those songs were probably performed for the first time was a really cool experience.

You are playing fiddle and banjo on Dierks’ newest album, Riser.  You and the rest of the band also played/sang on the EP Country & Cold Cans.  One song on both is Back Porch.  Are there more songs on Riser that you play on?

As you know by now, "Back Porch" was re-recorded for the Riser album. But for whatever reason, they decided to keep my banjo part from the original version and put it on the new version. Brian Layson played all new solos for the Riser version as well (guitar, resonator mandolin, and ganjo). The other song that I got to play on was "Drunk On A Plane," and for that one I played fiddle.

On tour with Dierks, you’ve played on every kind of stage from live crowds in dive bars to the nationally televised Grammy Awards.  Tell us about your most memorable experience from both ends of the spectrum.
It'll be hard to top the Grammy Awards. There is just so much history and credibility associated with the Grammys, so it was a huge honor to be a part of the show. I hope that we represented Nashville well.

On the other end of the spectrum, a few years ago we played a festival in College Station, TX. The crowd was drunk, loud and crazy...so much so that they were throwing everything and anything up on the stage at all of the bands. Shirts, boots, beer cans, you name it. Normally when someone throws a full can of beer at the stage, it's a sign that the show isn't so good, but apparently it's considered a compliment at this particular festival...at least that's what we were told.

Tell us about your favorite music video experience?  We were especially impressed with your portrayal of “Ray had a date with his wife” in “Am I The Only One?”

I don't know if there was much to be "impressed" with regarding my acting skills, but I appreciate the kind words! The "Am I The Only One" video was definitely a fun one, as was the shoot for "5-1-5-0." We shot that one down in Georgia and had a blast hanging with the locals and jumping (getting pushed) into the mud pits. Outside of Dierks' videos, another fun one that I was a part of was Gretchen WIlson's "California Girls" video. That one was shot on the beach in Santa Monica, CA. It was a really fun video to shoot because we basically got to spend the day hanging out on the beach and playing carnival games on the pier. Not a bad day at the office!

You’ve had the opportunity to meet and play on stage with many music legends while touring with Dierks.  Mike McCready from Pearl Jam, Joe Walsh, Bon Jovi, and most recently OneRepublic during CMT Crossroads, which aired in mid-March.  Who were you the most impressed to meet and why?

Meeting Mike McCready was so awesome for me. Pearl Jam's "Ten" album was the very first cassette tape I ever purchased as a kid back in 1991, and then a few years later I bought it again on CD. I've been a fan of theirs from the beginning, so getting to meet him and share the stage with him was amazing.

You were recently a spectator in the audience when Dierks performed his Up On The Ridge set at The Station Inn.  Did that make you feel anxious to be up on stage with him or relieved that you had a night off to relax and enjoy from the audience point of view?
It's really fun for me to sit in the audience once in a while, and I love hearing Dierks sing some bluegrass. He does a great job, and the musicians he had onstage with him that night were truly world-class.

If you could not do music for a living, what would you be doing?

That is really difficult to say. Growing up, I always fantasized about someday making a living playing music. I still pinch myself from time to time because I am so lucky to do what I do. But if not music, I probably would have found my way into the math/science world. Maybe I would have become an engineer or somehow gotten involved in finance. I've always enjoyed math and problem-solving (nerd!), so I could see myself enjoying that.

What is your favorite song to perform live?

Now that Dierks' new record is out, I love playing "Riser" every night. It's such a powerful and well-written song, and it's an easy one to get lost in.

I have learned so much from Dierks. He's the hardest working artist I've ever worked with, and I am inspired by his constant drive. He's never satisfied with "good enough" and is always striving to make the show as good as it can be. That kind of work ethic is contagious.

As far as what he's learned from me, I have no idea...maybe how to quickly run up all of the stairs at Red Rocks? Or how to score more goals in Xbox hockey?

Thanks, Dan! We'll see you on the road on the Riser Tour this summer!