"We can pick up right where we left off," sings Dierks Bentley in part three of the video series that started with a love triangle story-line in "I'll Be The Moon, followed by "What The Hell Did I Say," where the lover, played by Austin Cook, leaves texts on the girls phone that her live-in boyfriend reads while she's sleeping.

The video "Pick Up" starts with her waking up to a missing phone and an angry, abusive boyfriend.  While the lover is desperate to get her to pick up the phone, he drives to her house to find her on the floor.  Watch to the very end to see the shocking scene.

"When you're in the throes of a relationship, it can be crazy and lustful, even obsessive and jealous," says Bentley. "'Pick Up' drops into the sequence as that point when you just have to be closer to your girl. For the storyline and plot of these videos, Wes [Edwards, director] definitely takes it there and puts a shocking spin on it."


iTunes put "Pick Up" at #79 on the Country Chart today, while "I'll Be The Moon" lands at #114 and "What The Hell Did I Say" is #137.  The fact that these songs charted at all on iTunes without even being released as singles speaks volumes about the power of video and Dierks!

Stayed tuned for our recap of the fourth video, "Black," to close out the series.

Dierks kicked off his Somewhere On A Beach Tour Thursday night in Homdel, NJ, complete with a "Black" Bus before the shows for Black Card holders to listen to the whole album prior to the May 27 release.  Great way to give something special to the hard core fans!  He even jumped on the bus himself! 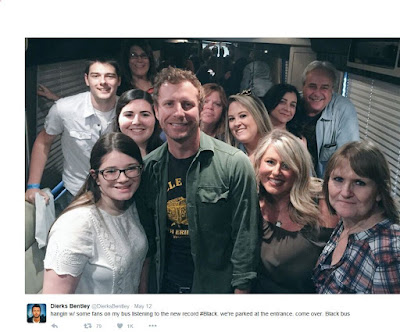 Email ThisBlogThis!Share to TwitterShare to FacebookShare to Pinterest
Labels: Austin Cook, Black Card, Dierks Bentley, I'll Be The Moon, Pick Up, What The Hell Did I Say