You may remember we told told you about our one and only Ireland DB Congress member, Rita (Reet) Eaton, who promotes Dierks daily--without every having seen a show or meeting him.  In April, Reet finally had the opportunity when Dierks did a show in Dublin.  Here's her story: 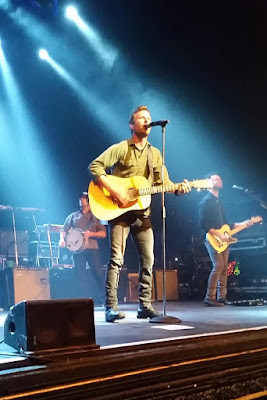 To say that I've been looking forward to seeing Dierks play live for a while now would probably be an understatement. I had thought about trying to save money to get over to the U.S. to see him, but when I heard last October/November that he was coming to Ireland, let's just say I was a little ecstatic. Oh hell......let's be honest here....I was freaking over the moon. I couldn't believe it. Dreams really do come true.

We have a few Country Music TV programmes over here in Ireland and I started sending in requests for Dierks videos and songs, telling them about his upcoming concert and was lucky enough to get him mentioned on a couple of the programmes, and get the videos and songs played.

I have been friends with a few DB Congress reps and Dierks fans on Facebook and Twitter and was delighted when I found out some of them were coming over for the show. I met up with Janet, David and Jim in Dublin. We had a great time. They were so nice, and before too long we were getting on like a house on fire. They all made my first Dierks gig so much more fun. David and Jim had some really cool stickers made especially for the Dublin show and we were giving them out to all and sundry. 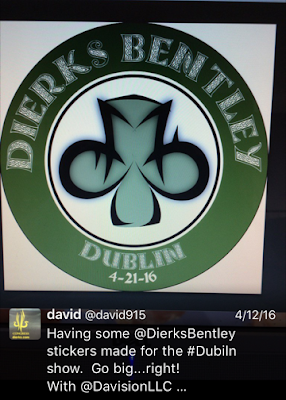 We were standing in line outside The Olympia Theatre in Dublin for a couple of hours wanting to make sure that we got a good spot (I mean....that's normal right?) when all of a sudden, there in front of me was DIERKS. FREAKIN'. BENTLEY. It took me a minute for this to sink in. Then I managed to pull myself together.

The first thing that hit me was how quiet and unassuming he was. I mean, when you see him on stage (and up to this point I've only seen videos and clips that have been posted up) he's there in front of you...larger than life, owning the stage and the audience. You almost expect him to be this larger than life personality off stage too, But no, he seems humble, normal, just an everyday sort of dude. At least that's how he came across to me anyway.

Having been around bands and musicians for a big part of my life I am all too aware that what you see on stage, isn't what you see off stage. But this was DIERKS. FREAKIN'. BENTLEY. He's in the Hall of Fame (exhibit) in Nashville. He co-hosted the ACM's. He's a huge Country Music Star in the U.S.......and here he is standing in front of me...on the street.....outside The Olympia Theatre. WOW!

Stashed in my bag I had some Irish Whiskeys which I didn't know if I was going to be able to sneak in or not. Luckily I didn't have to worry about that anymore. I gave them to him there and then, along with some Green Cups (as opposed to Red) as he was in Ireland after all. And yes, he used said Green Cups on stage (me privately chuffed). I also managed to get a "Selfie" taken with him (and I hate having my picture taken). It wasn't too long before a small crowd gathered and a few more "Selfies" were being taken. Dierks was great sharing his time. 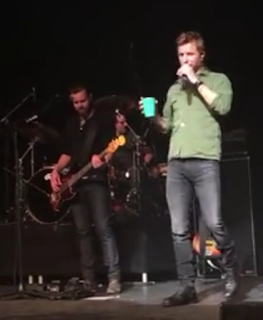 After that, it was time to go into The Olympia. Second highlight of my day.....I had yet to have my Meet and Greet with Dierks. I had my picture taken with him (again) and he signed my new "Black" t-shirt. He said that was his first time seeing them so that's my claim to fame. Dierks Bentley signed MY "Black" t-shirt first. 😊 Unfortunately, as my brain was not functioning at this point and I didn't get to say thanks to Dierks. Not only for his wonderful music, but also for the incredible friends in DB Congress that I have made through him. That's really what I wanted the Meet and Greet for, but my brain had pretty much left the building at this point. 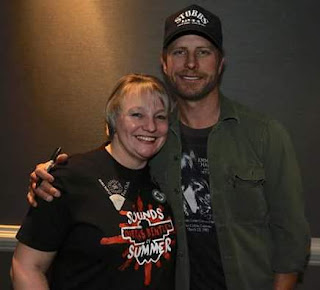 Off I went into the venue. We managed to get front row spots. No one in front of us, but plenty behind us.

At 8 pm Dierks' support act, Tucker Beathard, came on and showed us his musical talent. He was brilliant. Just him and his guitar, and as Dierks said, it's not easy to come out on stage, in a strange Country, and do what he did, but he did it with no problem at all and the crowd loved him. I loved him, too. A new fan for Tucker.

Finally, it was time.

Dan Hochhalter and Tim Sergent appeared on stage playing an intro with an Irish twist on the fiddle and banjo. This turned out to be the intro to "Up On The Ridge." Soon they were joined by the rest of the band, Cassady Feasby, Steve Misamore, Ben Helson, and Dierks himself for the full version of the song. So damned good.

My night had started. I was flying.

The night went on with many favourites (old and new)...."Free and Easy," "Tip It On Back," "Am I The Only One," "Say You Do," "I Hold On," "Every Mile A Memory," "Freedom," "Lot Of Leaving Left To Do," "Black," "Somewhere On A Beach," "Sideways," "I'll Be The Moon," "What The Hell Did I Say," then finishing the night with the only song that can finish a night like that off, "Drunk On A Plane."  In between his set he paid tribute to Merle Haggard and sang one of his songs, also mentioning Prince who had died that day.


Dierks had the crowd in the palm of his hand. He drew everyone in and made you feel like he was singing to you personally. He showed the audience his new "old" boots telling everyone how he got them and where they came from (from his DB Congress!).  He's real pleased with those boots.

The Band were just incredible and Ben, the new guitarist, fits right in perfectly. Every single person left The Olympia Theatre in Dublin on a high knowing that they had just witnessed one hell of a show, and one hell of a singer. It was special. No one was disappointed.

We all made our way out of The Olympia having made new friends along the way, gathered outside talking about the incredible night we'd all just had.

The only down side? I was just so sad that it was all over so soon. I had a serious case of Dierks Post Concert Blues.

What the night of April 21st 2016 did for me was make me even more determined to go to MM4K (Miles and Music For Kids) in 2017. Wild horses won't keep me away from that now. No Way.

So there you have it. My first ever Dierks Bentley experience. I just hope I manage to have many more.

Thank you Dierks for probably THE most memorable night of my life.....and that's saying something because I've seen a fair few bands, but nothing like this.

Oh yeah....a small P.S. We even made a brief appearance in the small compilation video that Dierks posted of his Dublin/London/Glasgow trips.