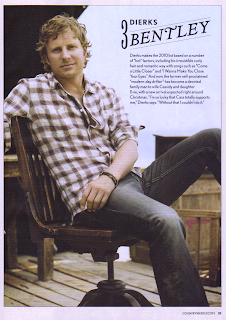 I'm beginning to believe that 2010 is Dierks Bentley's year! Country Weekly's October 18th issue includes Dierks at #3 on their 2010 top ten list of Country's Sexiest Men! Recognizing his irresistable curls, romantic way and family-man as top factors, CW's picks were not necessarily in sync with the readers' results.

I was thrilled with their picks, but disappointed the DB Congress couldn't land our president in the fans list! Either we need a whole lot more reps or we need to find a way that all 620 of us can pitch in on the voting! Need your ideas, 'congrass'!

More DB love is in the same issue with a 2-page spread on the ASCAP awards, where Dierks won Songwriter/Artist of the Year and a Top 5 Most Performed Song for Sideways--his 13th ASCAP for the "most performed song" category. In a new page, "Staff Picks," production manager Alyssa Carlson recomends Dierks' Up On The Ridge album.

Yes, 2010 is going to be a great year for our DBC prez.! With 3 CMA nominations, there's a good chance he'll walk away with a trophy--I'm guessing Album of the Year! This year also marks the 5th year of his Grand Ole Opry Induction and 5th anniversary of his Miles and Music For Kids charity event, which has raised over $1.2 million dollars for children's hospitals across the nation!
Posted by DB Congress at 4:48 PM