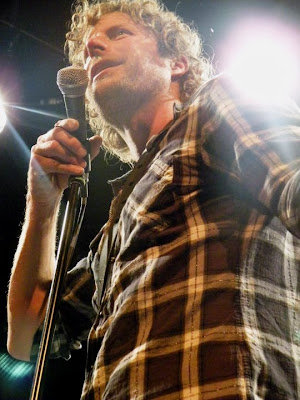 "An amiable country star from Nashville, Mr. Bentley sings, cleanly and earnestly, about family life and, in “What Was I Thinkin’,” of ogling a woman in a little white tank top. He’s dedicated to exploring both sides of the outlaw coin — the sinner and the savior, as established by Hank Williams — and does so with verve and wit. All these shows are sold out..."
-New York Times

Renee Glennon represents Connecticut for the DBC and she's got quite a story for you:

Monday October 18th began as any NYC outing for me, drive 2 hours to Stamford CT,take the 40 min. train into the city, take the subway...walk and walk for what seems like forever to shop, relax and eat dinner before attending an evening show. The thing that made this trip so special was it was my first time seeing Dierks Bentley perform in an intimate venue in New York and the first night of his 4-day bender in the Big Apple. On the Amtrack into Grand Central I sent a tweet out from my phone about my evenings plans, NEVER in a million years did I think the dude himself would respond back.

After a year of tweets to @Dierksbentley and finally a response....I was ELATED! I was bargain shopping & haggling with vendors on Canal St. when my pocket vibrated. It was a tweet/response from Dierks saying he was heading down to Little Italy for lunch himself and that he was "needing a break from making up the evenings setlist...taking a walk to get some fresh air." Suddenly every curly headed man in plaid that walked by me on the city streets made my heart stop! Us CT girls never did bump into Dierks, but who really cares. We still couldn't believe I got a tweet response. I knew this night would be magical for me...the miles & miles are always worth if for DB.

@CTcowgirl: On my way to NYC for some shopping, Little Italy & @Dierksbentley concert at Bowery Ballroom :)

@DierksBentley: @CTcowgirl right on! headed there myself.about a 20 minute walk to Bowery. been holed up working on setlist...liking it a lot. need air! #fb

So my concert buddy Becky and I eat a delish dinner, grab a canolli and head to the venue. The line was about 40 people deep which dampened my hopes of getting up close enough to see. General Admission is always a little sketchy. Low and behold the bartender told us girls to stand at a back entrance, and when the doors opened we bolted towards the stage. FRONT and CENTER...elbows under the microphone. I was floating on cloud one billion! I also was standing right next to three other DBC reps that I had never met until then & they introduced themselves--from all ends of the US they came to see Dierks. Great girls...the congress always brings us together eventually.

This concert was sold out and the people were really packed in. Bowery Ballroom is a gorgeous venue. Dierks had a great opening act that really got everyone warmed up, but didn't take the stage until 10 pm. He was full of early evening energy like he'd been waiting all day to come out with guns blazing as he performed his regular crowd pleasing concert for this city crowd. I was psyched because he stopped the show to point out his "from the beginning fans"--the Congress girls in the front--and sang a few songs that I had never heard him perform live in concert until then: "Wish It Would Break," which got a tremendous applause from the audience and immediately followed it with "My Love Will Follow You." I sang every word; it brought me back to when I first listened to his first CD over and over and over. Oh how the years have gone by. His music brings the memory right back though.

After Free And Easy, Dierks tells the story of how he came to write "Wish It Would Break," an old school favorite of the fan club's (and DB knows and recognizes that fact!) that never got released as a single, but should have.

Dierks is a real comedian though, I have to say. He had me roaring laughing that night, making fun of his new guitarist's T-Shirt that had Randy Travis' head on it. Dierks totally thought it was Arnold Schwarzenegger, getting the entire audience to scream "Hi (name)..." to every other single band member, and telling funny stories about each bandmember's nicknames and busting their chops, and making fun of Steve and his pinstriped pants or as Dierks called them "Easter pants." He really interacted with the audience that night too. Towards the end of the show DB was rolling laughing after he pointed out a guy in the audience that looked almost exactly like his "hero" Will Ferrell. The entire crowd was in hysterics. This guy was almost identical to the "Old School" star. DB seemed very giddy that evening. It's great to see him truly having an excellent time up there.

He broke down a couple of bluegrass songs off of the Up On The Ridge CD and the city crowd turned completely hillbilly country. They loved every bit of it. The band seemed pleased that their audience welcomed the acoustic jam session as they sang "Fiddlin Around," and other covers of bluegrass favorites from a long, long ago.

Of course my favorite parts personally were every time Dierks gave me some front row love. He pointed his finger down during Come A Little Closer... "girl it's right here at our fingertips" ...and joined fingertips with me and then repeated the same motion during Free & Easy "...if you only get to go around ONE time" Fingertip again. He knew I'd get it.

A single fingertip touch from Dierks is like an all over hug for me! 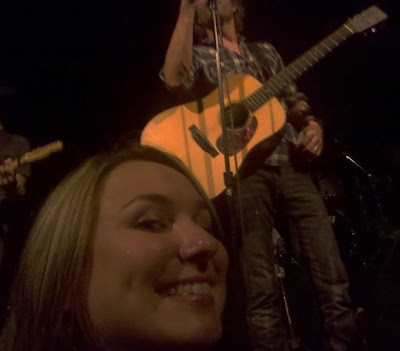 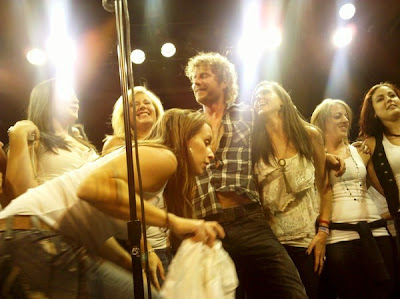 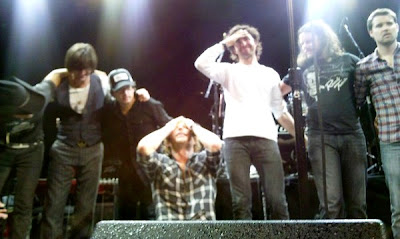 Another amazing trip to the city and incredible show--one I'll never forget and it all started with a tweet from D.

The night ended with a tailgate handout of beers to a crowd of people on the sidewalk & Dierks Bentley songs blasting in the city streets from the Will Ferrell look-alike. He was an instant celebrity thanks to our other favorite curly headed Comedian Dierks and looked just as elated as I was for having such a memorable evening.

Never a dull moment in NYC, and this was only night one...

Thanks for sharing, Renee! Stay tuned for the Day Two - City Winery blog!
Posted by DB Congress at 8:40 PM