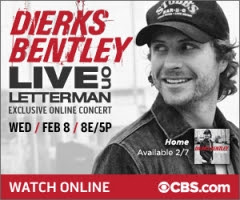 Enter To Win Tickets to See Dierks in New York!

Dierks is going to be performing on the Live on Letterman series in New York City on February 8th, and DB Congress gets first dibs at winning them! The Bowery Ballroom show sold out very quickly, so here's another opportunity. Go to dierks.com and sign in with your fan club login.  Then click this link to fill out the form for your chance to win.

Transportation will NOT be included so please be sure you can get to New York City before entering.

For those of you who can't make it to New York, you'll be able to watch the show online at CBS.com.

Performance To Follow The Release Of His Newest Album, “Home”

Bentley will play music from his catalog of hits, including songs from his forthcoming Capitol Nashville release Home, which hits stores Tuesday, Feb. 7, the day prior to his webcast performance.  The LIVE ON LETTERMAN franchise has been host to some of the most established bands and musicians across the globe, staged in an intimate and dynamic setting for worldwide followers to enjoy.

Fans can watch Bentley’s webcast live or on-demand at http://www.cbs.com/late_night/liveonletterman/. In addition, the show is available live and on-demand through CBS properties, broadcast on select CBS RADIO stations, viewable live on CBS’s JumboTron in Times Square, as well as via a live audio stream on Radio.com’s mobile applications. The webcasts are also offered through VEVO’s website, mobile and connected devices and syndication partners.

After selling over five million records, obtaining 10 GRAMMY® nominations, acquiring eight #1 hits in country radio, being named CMA’s “Best New Artist” and playing for the President of the United States, Dierks Bentley has proven to be quite a successful name in country music. Having skillfully developed his musicianship, Bentley has played at a wide variety of venues, including Lollapalooza, Telluride Blue Grass Festival and the CMA Music Festival. The multi-platinum singer/songwriter will release his sixth Capitol Nashville studio album, Home, on Tuesday, Feb. 7 and continue his headlining Country & Cold Cans Tour. “Home,” the second single off his new album, received a nomination Thursday, Jan. 26 for Song of the Year in the “47th Annual Academy of Country Music Awards,” which will be broadcast on CBS Sunday, April 1.

Bentley’s LIVE ON LETTERMAN webcast will follow the taping of his performance on the LATE SHOW with DAVID LETTERMAN, which will be broadcast later that evening (11:35 PM-12:37 AM, ET/PT) on the CBS Television Network.