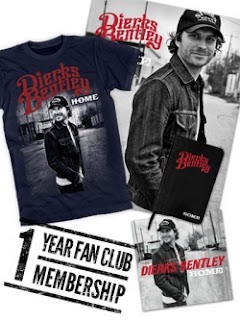 Posted by DB Congress at 5:49 PM No comments: 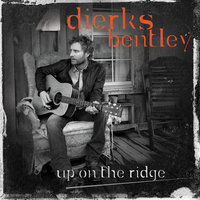 Am I the only one who, after hearing "Senor (Tales of Yankee Power)" on Dierks Bentley's Up On The Ridge CD, had to know more about the meaning behind the Bob Dylan lyrics?

It seems there are a few possible interpretative themes--patriotic, religious, love or drugs--to name a few.

Whatever your take, be sure to give special attention to your calendars for January 24, 2012--when a live version of the song by Dierks will be available as one of the tracks on the forthcoming Bob Dylan tribute compilation CD.

The title of the 4-CD compilation is Chimes of Freedom: The Songs of Bob Dylan Honoring 50 Years of Amnesty International.  The human rights organization fights against censorship and activities on behalf of free speech.

Other artists include, Sugarland, who will contribute a live version of  "Tonight I'll Be Staying Here With You," and Dylan himself singing the title track.

Given the title of the CD, I'm going with the patriotic theme.  How about you?

~Ronna
Posted by DB Congress at 4:30 PM No comments:

What is Dierks Bentley Thankful For?

On this 2011 Thanksgiving Day, we have a lot to be thankful for! Namely, Dierks Bentley.  In a recent reply to his DB Congress, Dierks seems to feel the same way about us! 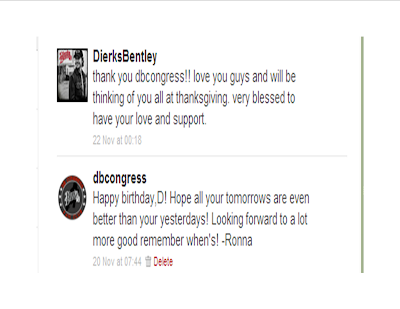 This year Dierks had a #1 with Am I The Only One, performed for sold out crowds, reached $1.7 for children's hospitals via Miles & Music For Kids, and sang for The President of the USA!
From The Country Vibe:
On Thanksgiving when Dierks Bentley counts his blessings, the thing he will be most thankful for are his two healthy daughters, Evie and Jordan. “Coming off the Miles & Music event this year in Nashville and Vanderbilt Children’s Hospital and knowing how many families are going through tough times with health of their children. That’s the number-one blessing when you have kids is that they’re healthy,” says Dierks.

“Even when they have a mild cold, it’s like, ‘Aww, man. I feel so bad for them.’ I can’t imagine what those folks at Vanderbilt and St. Jude and all of those children’s hospitals across the country, what they’re going through on Thanksgiving. I’m sure they’re just happy to be together, and that’d be the same thing for me—just to be with my family and thankful for the blessings that I have.”

The men and women who are currently serving our country are the other people Dierks will be thankful for. He says, ”The second thing we will pray for is the troops and their families, the ones that are away from their families at Thanksgiving, the ones that are out there fighting on Thanksgiving Day so we can be back here and have that quality time, have that quiet time is definitely something we’re so appreciative of.”

Happy Thanksgiving to all our DB Congress Reps--thanks for your year-round dedication to Dierks!

We give thanks to all the band and crew who together display a great deal of talent to keep our president sounding and looking good--Chris, Britt, Jay, Brian, Steve, Tim, Dan and Cassady!

And finally, God Bless Dierks Bentley, his voice and powerful songwriting talent, and the man that he is. We love you! Happy Thanksgiving! 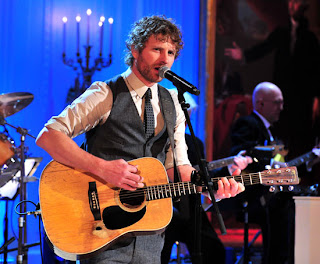 The show ended with Kris Kristofferson singing "Bobby Magee" and all the artists joined him on stage and sang a line or two.  Then, as the credits rolled, President and Mrs. Obama thanked each performer by shaking hands and freely giving out hugs.  Another great feat for the history books!
Posted by DB Congress at 8:40 AM 1 comment:

Dierks DVR Reminder! See a video preview here and set a reminder to watch @OfficialRFDTV Sunday, 11/20, at 7/6c for Reflections From The Circle with @DierksBentley, featuring an interview with Country Music DJ Hall of Fame inductee Eddie Stubbs from the Grand Ole Opry stage. Visit www.opry.com to find out more!
Posted by DB Congress at 8:53 PM No comments: 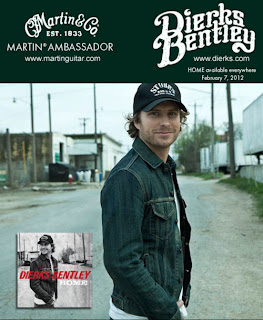 I've never seen Dierks Bentley play a show without his D28 Martin Guitar--the one where his pinky-finger has worn a hole clean through it!  It's no wonder Martin Guitar wanted him for their Ambassador!

"CONGRATULATIONS to our new Martin Guitar Ambassador, Dierks Bentley!!!! Dierks has been playing Martin guitars proudly for years, and we are thrilled to finally make it official. We are so excited to have this 10-time Grammy-nominated artist as a part of the Martin guitar family."

Martin Guitar could not contain their excitement on Twitter:


MartinGuitar: @DIERKSBENTLEY is our new Ambassador! We are SO EXCITED!!!! Welcome to the family Dierks! #guitar http://ow.ly/i/lmFN

MartinGuitar: @dierksbentley The honor's all ours - we've loved your music for a long time, & are so excited about the future! Have a great time tonight!

Martin Guitar also follow DB Congress on Twitter and has been very supportive in helping us promote Dierks!

In honor of our their new Ambassador, Martin Guitar put together a Mixtape Vol 2 - Country, on @Spotify! Click here to listen!


Since 1833, C. F. Martin & Co. has been a permanent part of the American experience: The oldest, most respected, most innovative guitar in American history.

DB Congress President To Perform for the US President 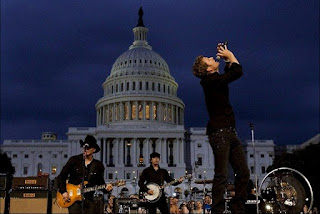 Our DB Congress President--Dierks Bentley--will perform for the President of the United States of America on Monday, November 21, 2011.

Some of the performers also will take part in an afternoon workshop at the White House for 120 local students about the history of country music and its cultural significance.

The 2 p.m. EST workshop and the 7 p.m. EST concert will stream live on www.whitehouse.gov/live.

The concert also will be broadcast by PBS on Nov. 23 at 8 PM ET.

Be sure to tune in!

In its 6th week on the charts, Dierks Bentley's "Home" moved to #23 on both the Billboard and Mediabase charts. The big win, however, was on the listener feedback charts. On the Callout America chart, "Home" rocketed up SEVEN spots to #14 with just a mere .7% of listeners saying they "strongly dislike" the song (what can I say? Haters are gonna hate). On the RadioFeedback chart, it moved another 3 spots to #13, between two of the strongest songs on the charts right now: Zac Brown Band's "Keep Me in Mind" and Eric Church's "Drink in My Hand."

Unfortunately, even though it's still growing healthily and gaining somewhat on Brad Paisley's "Camouflage," "Home" is likely to spend another week at #23 - nothing has or will fall out of the Top 10 to go recurrent, and all of the songs ahead of it are moving up as well. I expect upward movement will continue next week, however, and Top 20 is likely for week 8. Don't forget to buy your copy now on iTunes! :) 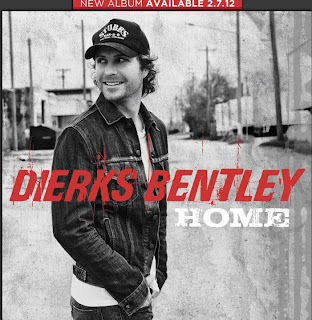 And the news we've all been waiting for was released this evening: the studio album "Home" has a release date! Mark your calendars for February 7, 2012! Isn't that cover fabulous?! 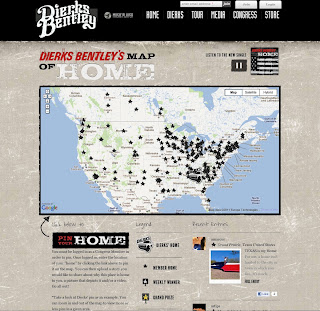 Dierks Bentley has chosen the ten finalists of his Map of Home contest.  The Grand Prize winner will be announced tomorrow (11/3).  Who will spend a day on the road with DB?  Which one is your favorite?

Congratulations to tracy for being our last weekly winner for Dierks' Map of Home Contest. The 10 finalists have been chosen. Five of these candidates are our weekly winners and the other five are the entries which have received the most "likes" since the beginning of the contest. Dierks will choose the grand prize winner, who will accompany him for a day on the road. That winner will be announced tomorrow.


Congratulations to these 10 finalists! You can click the title of their entry to view it.

msaddie1987 No Matter Where Life Takes Me, Wilkes is My Home :)

bockbutt10 Where I Come From

HannahR121 Home is Where the Rump Rests

simpsoja698 Home is Where You Hang Your Poopy Suit

leahluvsdierks This Place is a Country Song Waiting to Happen

Stay tuned for the announcement of the grand prize winner, tomorrow!
Posted by DB Congress at 7:08 PM No comments: