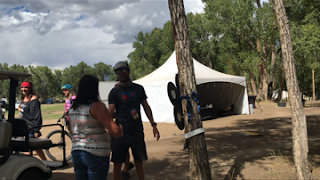 The year my husband and I got married, Dierks played a local festival and we went to see him. I was instantly in love with all those curls and we both liked his style and music. We began following his music and keeping up with his local tour dates and hoping he’d headline a show soon.

As he became more popular (along with the Internet), I found his website and becoming a part of the fan club seemed like a no brainer! I’d already been a fan since he was out playing small town festivals.

Flash forward to 2018, Dierks plans a three-day music festival in Colorado (Seven Peaks Festival). We are from Ohio but I knew this trip had to happen no matter what. I ordered tickets the minute they went on sale and we started planning our road trip west.

Over the past year, my husband and I have faced a lot of devastating blows, [from] the loss of our nephew who was away with the Army to the loss of our home [due] to a house fire. Music became a survival tool. Riser became my "cry in the car and pray for better days" song. Seeing Dierks perform live always rang through me and reminded me we are Risers.

As we planned for the festival, we thought about ways to decorate our camping spot. We wanted something to catch Dierks' eye so hopefully we could meet him (we never had before).We decided on a Riser bird sign that we could have everyone passing by sign ... and hopefully Dierks would, too! Somewhere in the making of the sign we decided that putting it on old records would look pretty awesome and once we [got] back home we could hang it in our bedroom to always remember our time in the mountains. We made it, we hauled it carefully across seven states, hung it up and prayed for Dierks to come by! 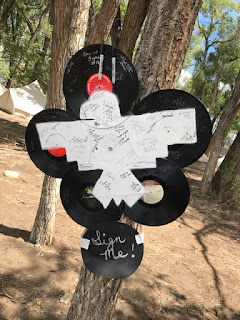 Sure enough, he was buzzing by in a golf cart, and I spotted him coming (it’s a weird sense I have, I can see him a mile away!) so I ran out and flagged him down--and he signed it! I thanked him so much for being him, for his festival, and for every song he’s ever sang. And of course for signing my riser bird. 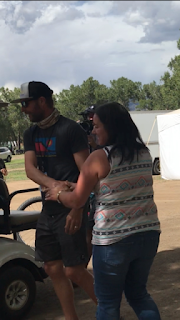