Dierks Bentley kicked off Sunday night, October 27, 2019, at Joe's Bar on Weed Street in Chicago with, "The Mountain," a pre-Halloween treat for DB Congress members in attendance as it's not very often Dierks plays the title song to his 2018 album 'live' for his fans.

It was appropriate though, as he sang, "I climbed like hell through the brush and the bramble."  He's come a long way to be in a position to give back in a big way, and the event and Joe's was a benefit for The Riser Foundation--raising over $33,000. 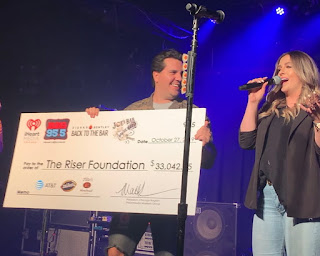 The Riser Foundation was launched in 2006, by Dierks and a handful of passionate Nashville supporters of charitable organizations--mostly to help children and families.  You may remember our blogs from the 10-year run of Miles and Music For Kids, the motorcycle/concert event that benefitted Vanderbilt Children's Hospital, and several children's hospitals around the country.

Over two dozen more organizations have benefitted from the efforts of The Riser Foundation over the years including:

Hospice of the Valley - where Dierks' dad spent his last days

Jordan Sterling Foundation -  Dierks' sang a song he wrote dedicated to his friend.

Add $33,042 from the event at Joe's and The Riser Foundation has donated nearly $8 million, supporting more than sick kids, but also homelessness, literacy, education and hunger over the years.

As usual, DB Congress reps were in line early in the day, to be front row for the show that night.  As with most benefits, many folks had bid upwards of $700, donating to the cause, and earning them early entrance--so sadly, the front row spots for hard-core Dierks fans were not meant to be that night.

But in the second row, he still saw us, called us out, pointes to us and proceeded to blame us for having to shake up the set list.

"It's always great seeing you guys here, but you make me have to change things. I was gonna do the same show we did last time I was in town, but I was like, nah...gotta change it up!"

The evening would not be complete without the benefit's namesake song, Riser, at which point the band left the stage and Dierks remained with just his guitar and heartfelt voice:


"I would not do this anywhere else 'cause it could totally wreck the show, but I know I can trust you guys to be cool letting these guys play about 2 or 3 songs.  These guys love 90's country, they're called Hot Country Knights...just give them a chance...

We dare you not to sing along to the catchy Hot Country Knights theme song! 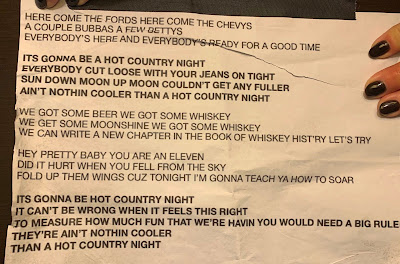 After a few HCK songs, there was banter between Dierks and his dudes: Where's my band? Where are my guys? Will you guys do a couple of my songs, do you know my stuff?  Yeah--anybody can play your stuff.  Can you zip that? 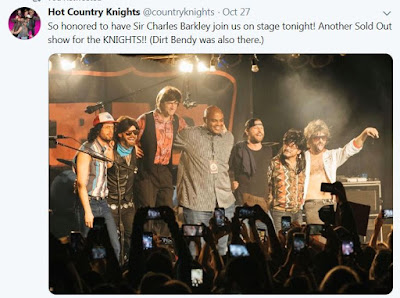 To be in tune with the Riser benefit theme, we were proud to surprise Dierks early with the new limited edition Flag and Anthem/Desert Son Riser Camo Tshirts* that went on sale to the public the next day.  These tees give 100% of the proceeds to Folds of Honor, to help provide educational scholarships to spouses and children of our fallen and disabled service-members.
*The Camo shirts are currently sold out, but will be back in stock next week! Keep trying the link! 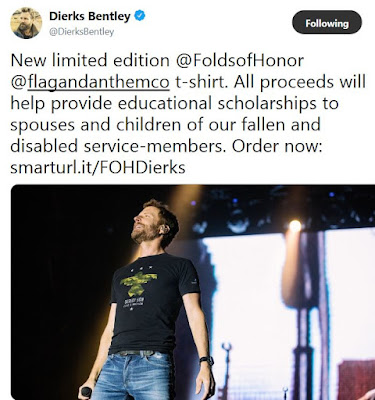 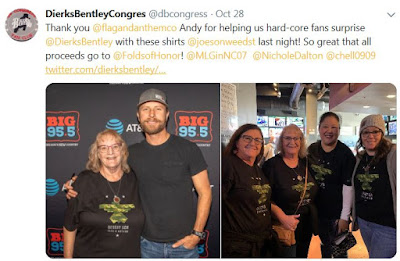 "We believe that there are everyday Risers all around, and it's our obligation to recognize, stand by and support them." - The Riser Foundation website


Donate to The Riser Foundation.

Posted by DB Congress at 1:21 PM No comments: