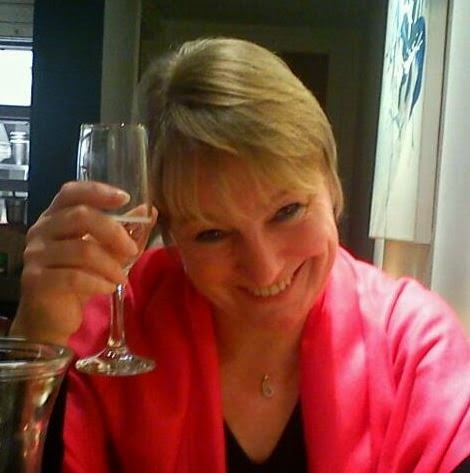 Our newest DB Congress rep from Ireland tells us about the unique way she came to know and love Dierks Bentley, his band and his music.

"Earlier this year, a Saturday morning, I was scrolling through my Tweets when I noticed one from Whispering Bob Harris raving about some Country Singer named Dierks Bentley. Who? Never heard of him. So, being a music lover, I immediately went on YouTube and checked him out.

The first song I played was "I Hold On".....liked it. The next? "Bourbon in Kentucky." REALLY liked it and kept going. "Am I The Only One," "Up On The Ridge," "Come A Little Closer."  It's not very often music appeals to me straight away, it usually takes a few listens before I really get into it.

I tweeted Whispering Bob Harris back saying "Why in the hell have I not heard of @DierksBentley before?" I was hooked, immediately got onto Amazon and ordered "Riser" and I haven't stopped playing it since. It is on constantly in my car going to and from work. It sets the mood for the day and gets rid of the stresses on the way home. I bop around to it in my kitchen whilst cooking, and you will quite often see me, a 53 year old girl, playing air guitar along with Brian Layson (I love his playing).

Since then I have purchased all of Dierks CD's that are available and have played little else since. "Riser" and "Up On The Ridge" probably being the most played.

Music has always been a major part of my life. I have been lucky enough to see some great bands and artists over the years ranging from Fleetwood Mac to Michael Jackson, Mary Chapin Carpenter to Robert Plant, Bonnie Raitt, Eric Clapton, Tom Petty, the list goes on. I even sang in a band a good few years back (albeit for fun more than anything).

I'm a lyrics person, it's always the lyrics of a song that appeal to me first, and I think that's why I love Dierks. His songs are a mix of fun, loving, meaningful, and some really make you think. "Here on Earth" is one particularly close to my heart. Of course it helps that he's not too hard on the eyes either.

I follow the band on Twitter and Facebook (if they don't come to Ireland or the UK it's probably the closest I'll get to them!). I like that they are fun - Cassady's [Feasby, bass] humour in particular appeals to me.  As we say here in Ireland "he's a gas man." That doesn't mean you suffer with flatulence by the way Cassady, it means you're funny....in a good way.

So, I've been introducing Dierks to my friends. Earlier this year I was travelling back to Ireland from my annual trip home (the UK) waiting to board my car onto the ferry.  It was a sunny day, the window was down and Riser CD was playing.  Next thing I know half a dozen people are stood around the car having a listen. That's when you know you're onto something good.

Thanks for sharing your story, Reet!  We hope Irelend lands on Dierks' tour schedule soon for you! 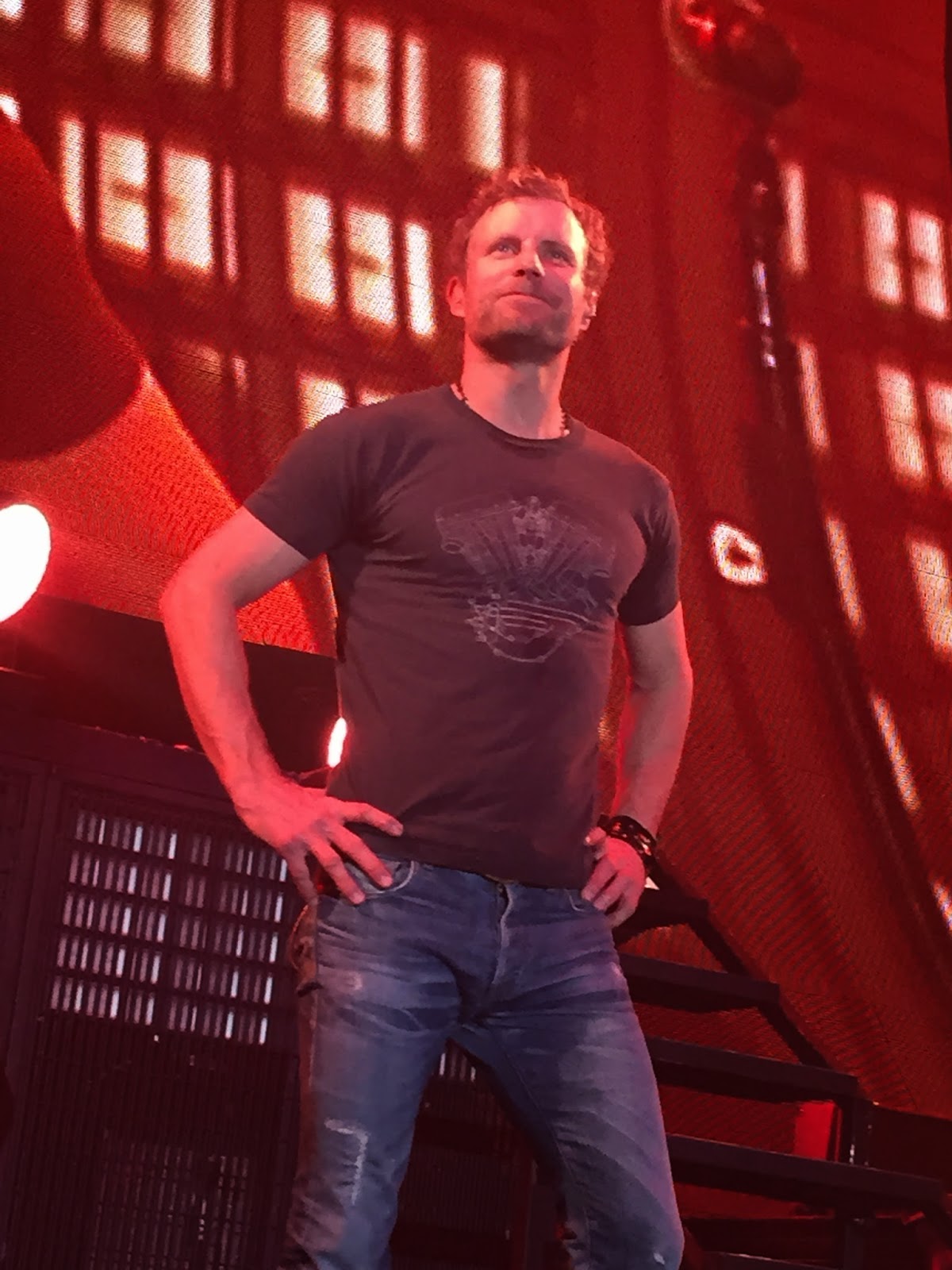 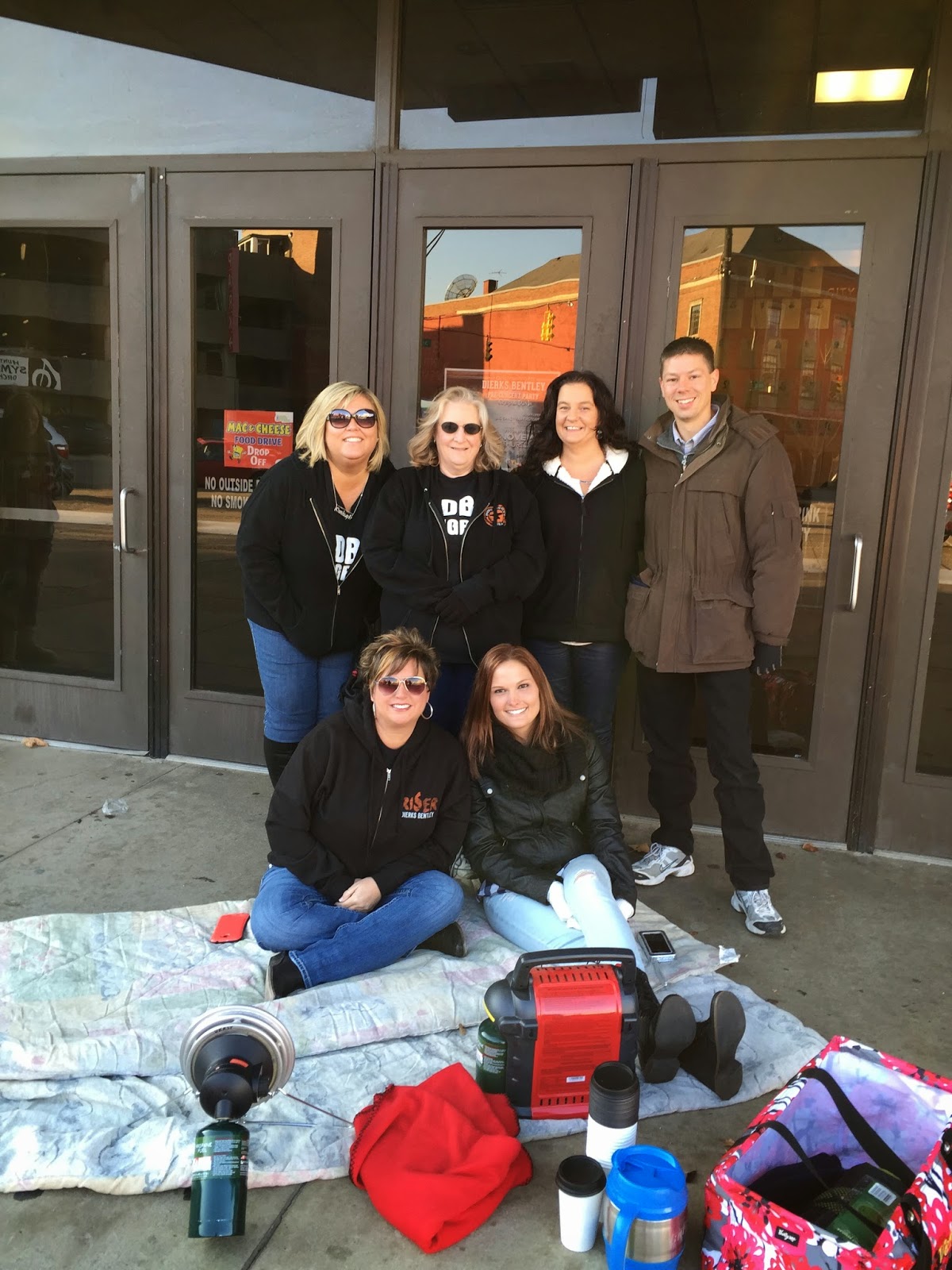 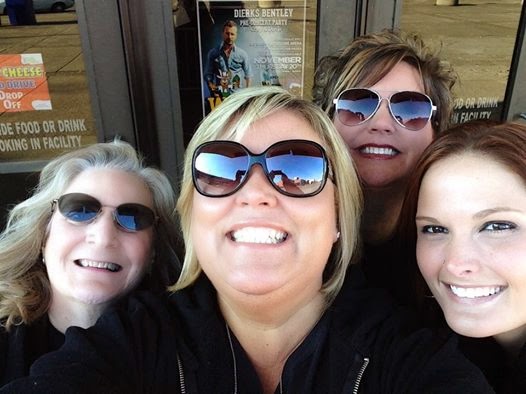 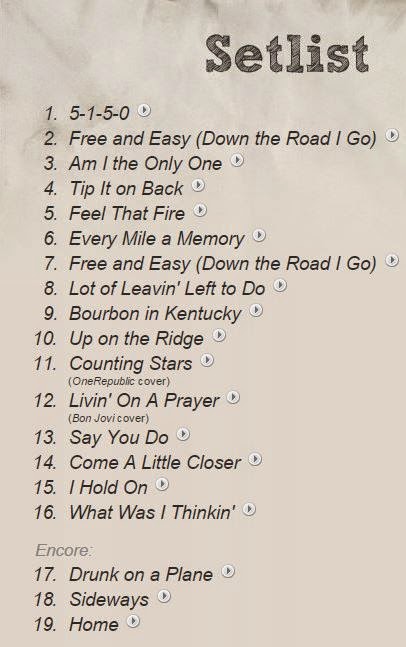 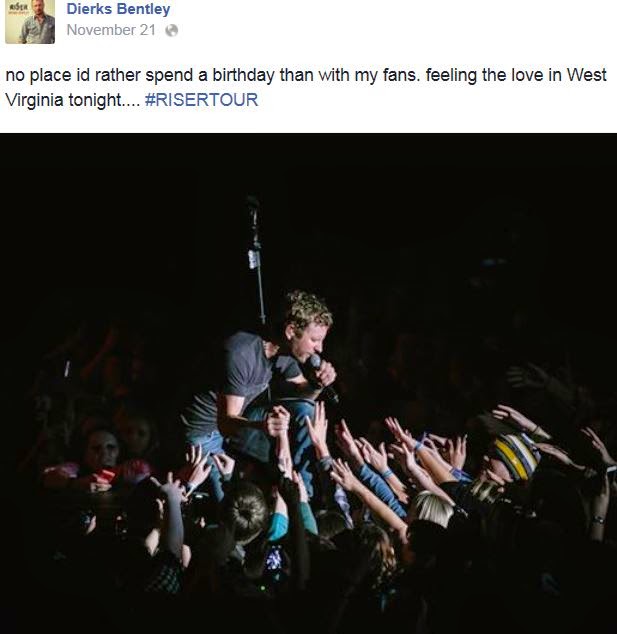 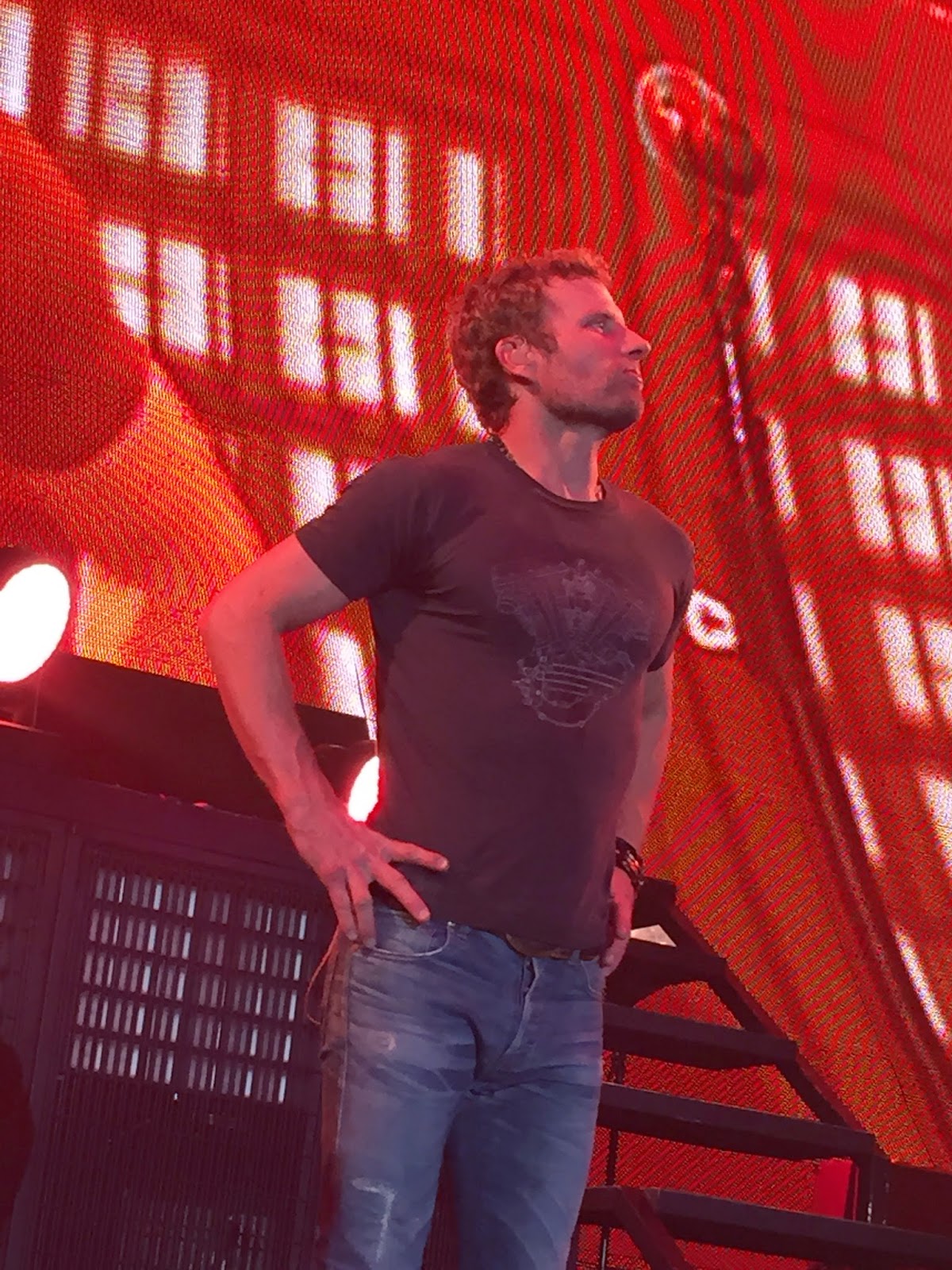 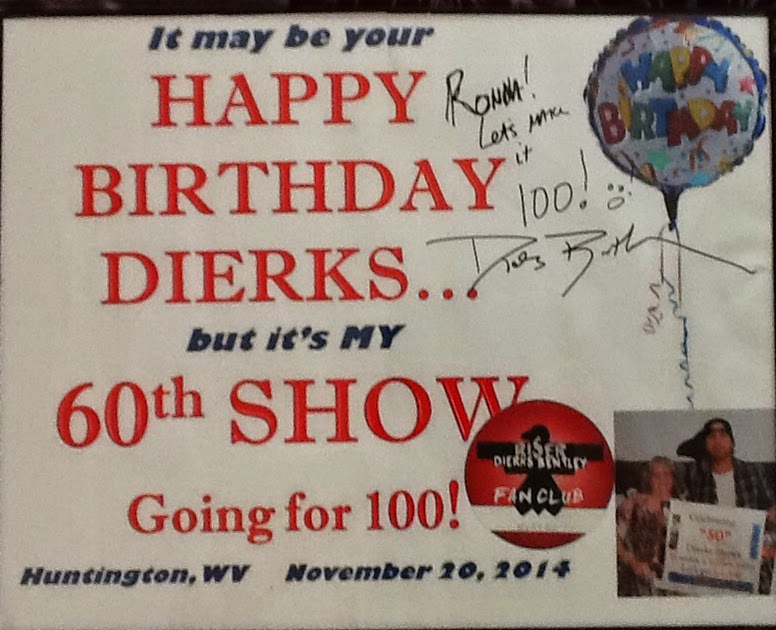 It’s very difficult to write a positive blog about Dierks Bentley and The 48th Annual CMA Awards results. Many of us thought that this would be Dierks’s year as Riser, most certainly his best work to date (not counting Up on the Ridge), was pretty much universally praised. So far, it has produced two number one singles, one hilarious video, and a successful tour that has catapulted him to another level as an artist.

The morning of the show, we celebrated when he won the CMA Award for Video of the Year for “Drunk on a Plane,” which was announced prior to the televised awards show--the first of five nominations, the most of any male artist this year. However, as we went into watching the CMA Awards with high hopes, we came out three hours later utterly disappointed.

“I Hold On,” which was as personal a song as one can get, also became an anthem for many—a perfect combination to ensure a Song of the Year win. Alas, Kacey Musgraves, Brandy Clark and Shane McAnally took home the award for “Follow Your Arrow.”

We watched as Single of the Year and Album of the Year went to his friend and tour mate, Miranda Lambert.

And as we longed for the tide to turn in the Male Vocalist category, Blake Shelton walked away with the award for another year.

The one bright spot of the evening, was Dierks and the guys’ performance of “Drunk on a Plane.” Although sound quality was not at its best (for many of the performers) you could see Dierks and company put their all into the song which undoubtedly was the song of the summer.

Dierks himself said, "I've got my 'Yay, somebody else won, congratulations' face down pat. But we're winning right now."

They most certainly are.

With the success that 2014 has brought, one can only believe that 2015 will only see his star shine brighter and the industry take note to soon bestow on him the accolades of which he is most deserving. Until then, he will most certainly remain a winner in our eyes.