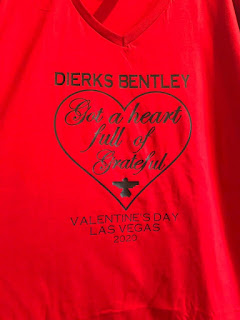 In a two-night residency at The Chelsea Theater at The Cosmopolitan in Las Vegas, Dierks Bentley and his 90's Country band, Hot Country Knights crushed Valentines Day Weekend in back to back "HOT" performances, February 14 and 15, 2020.

While HCK was the opening act, they didn't just break even, they came out ahead! Caylee Hammack had to follow their 'wild and a little crazy, too' performance each night, and she held her own in a sparkly white ice skating outfit that Dierks noted on night two was perfect for the Burning Man On Ice tour, when he brought her out to sing 'Different For Girls' with him.  Before that, she killed it on harmonica in her own set that also included a Lizzo cover.

It's always a safe bet you'll find DB Congress in full force at any Dierks show.  Vegas was a draw for nearly two dozen reps, all supporting the Double dose of Dierks and Hot Country Knights with special Tshirts, thanks to LA rep, Cecia Benoit! See our socials for photos!

Here are some of the weekend's highlights:

Night 1 - Hot Country Knight's Viagra commercial  by Doug and Rayro: "We use a lot of Viagra in this band so we gotta do a jingle for Viagra."

I'm a riser
I'm a get the blood flowin' til it's a different sizer
I want to thank the white coat guys that work at Pfizer
Got 4 hours to turn this thing into a gieser
My game's on fire, like Orel Hershiser
I'm a Riser

Night 2- Hot Country Knight's ex-lax commercial by Doug and Rayro: "Tonight's sponsorship is brought to you by Ex-Lax.  We only endorse products that we use, and we use a shitload of this stuff.  We gotta pay the bills."


Am I the only one who wants a #2 tonight? Listen to the rest in this video clip:

Night 1 - DBC was feeling the love from Dierks from the get go:

Night 1 - Dierks asked the crowd, "Anybody coming out for both nights?  I know YOU guys are (points to front row)...so hardcore:


I love Hooters, I love 2 for 1 wing Wednesdays with a whiskey shooter
If you're a vegan well you're a loser
And girls at the Vegas location are cuter
And whatever you're watching on your computer...

It's unbelievable, this guy [Doug] is destroying my songs!"

"I'm sorry about that I've been drinking a lot and I got the shakes (his hands violently shaking in a motion to the crowd to keep cheering.)  Damn, you guys!  I mean, last night was good but let's be honest, I means boys (talking to the band)...this!? Gotta love a number two.  Thank you so much for kickin' ass tonight.  I'm feeling so good tonight.  I love...how many people here from Vegas tonight? (Loud cheers).  I love Vegas so much.  One of my favorite things about it...the strip is good--it's ok. But if you drive like 40 minutes that way out to Red Rocks Canyon, that's really cool.  That's the shit out there.  And the way you have the best time of your life when you come here is you do a little bit of that out there, you go climb Turtle Head Trail...which I did today in a pair of Vans and no water.  You do that shit and then you come here, you get the best of both worlds.  That's how you do the best "Living." And that's what this song is about, making the most of every moment.  I've packed a lot into these 48 hours and it's one of my favorite places to play."


Night 2 - Every Mile A Memory - Now with his massive catalog, odds are not great that Dierks will include EMAM in the set, but on night two we got lucky--and felt very loved! 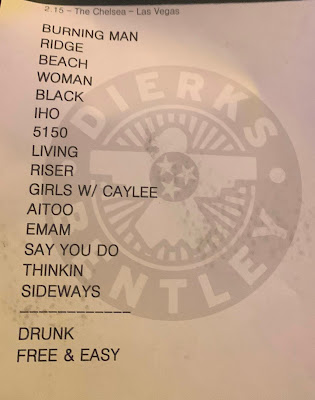