Somewhere On A Beach is Splashy Debut 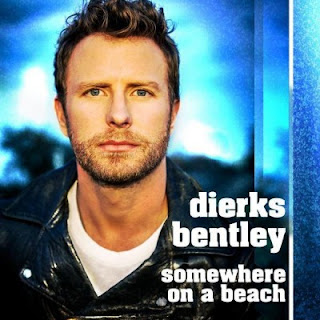 As devoted Dierks Bentley fans we have waited for new music for almost two years and after days of anticipation starting with the album announcement, we finally got our fix.

The first single from Dierks’ upcoming album, Black, is a perfect get ready for summertime song. “Somewhere On A Beach” continues the story of “Drunk On A Plane,” finding out what happened after he landed on the island.

The mid-tempo song has a bluesy feel and tells of finding a new love (Bentley has said that the song reminds him of his wife) after being left at the altar. It’s a brimming with sunshine tune that tells the initial part of the story that is said to be told in Black, exploring all facets of a long term relationship including the “shadows and edges of the heart.”

“Somewhere On A Beach," only the third single not co-written by Bentley (Say You Do and Riser), has all the makings of a radio hit, and leaves us wanting more from Black, including those songs with depth and thoughtfulness that Dierks does so well.

Here's an excerpt from The Bobby Bones Show where Dierks explained SOAB:

"[Black the album] follows all the ebbs and curves of a long-term relationship and the stuff that goes with it…being drunk on a beach and finding that someone…I remember when I met my wife [Cassidy Black] it was like such a good feeling knowing that all the other folks before her, they kinda did me wrong in different ways, and people I lost weight over, and lost hair over, and just thought I’d never get past that person, and when you find the right one it’s such a great feeling, so all the way from Somewhere On A Beach to a song called Suspicions."

There are mixed feelings about the song being released as the lead single.  Some absolutely love it : 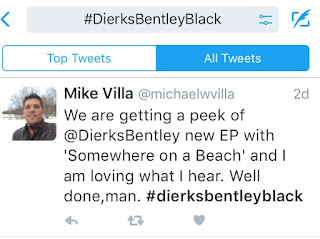 From iTunes reviewer ZakW15:  "This song is going to sky rocket off the charts. AMAZING song. Can't wait for it to top charts and the Black album to come out."

Some not so much: 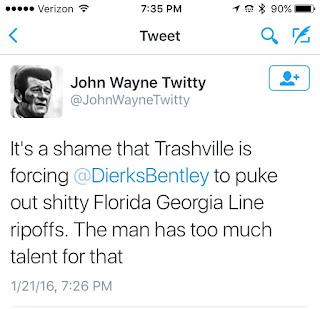 From iTunes reviewer Dayanks: "This is terrible.  I never thought I'd say that about one of his songs. But this is just awful. It sounds like a Sam Hunt leftover. Dierks is better than that. I hold out hope for the rest of the album."

Love it or hate it, devoted hard core Dierks fans vow to learn the lyrics, sing along at shows and may even promote it to radio--but it may not need much help.  SOAB only went for official adds today and has already landed at #29 on the Billboard chart, his highest debut ever. It bows at #39 on Mediabase (they tally based on points vs. audience as Billboard does), and earned Dierks his most first-week adds in his career, with 99 stations today! The iHeart hourly airplay on Tuesday, January 19 gave it a big boost, not to mention The Ellen Show debut performance:


Creative marketing made fans question if Dierks gave out his phone number by mistake again: 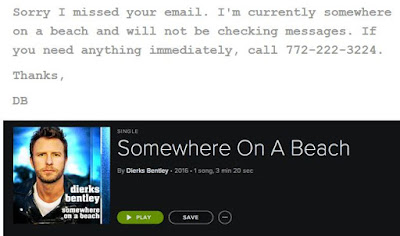 But it was no mistake! Call the number and you hear Dierks saying leave a message--tell him what you think of Somewhere On A Beach!

Possibly the best indication the song is going to be successful and likely his 14th number one is the fact that it found it's way to the top of the iTunes chart--his first one ever! 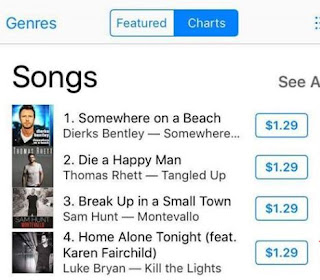 We wish all his singles were this easy for radio to play!

Download "Somewhere On A Beach" now on iTunes, or order your Black Card on dierks.com to preorder The Black CD and get access to unreleased songs, one of a kind merch items, special discounts, bonus videos, and other surprises.You also get Entry (1) into the official All Access Black Ticket Sweepstakes* to fly to opening night of the tour, hotel accommodations, a meet and greet with Dierks, and the ultimate prize of two tickets to every show on the tour.

I'm somewhere on a beach
Sipping something strong,
Got a new girl, she got it going on
We drink all day, and party all night
I'm way too gone to have you on my mind
She got a body and she's naughty,
and she got me like you ain't never got me.
I'm getting sun, getting some, and I ain't slept in a week
Yeah, I'm somewhere on a beach.

I wish it could've worked out
But I'm gettin' over you now,
On a beach towel
With my shades on
My drink's up
And the sun's out
Huh! somewhere on a beach!