For DB Congress members, the name Del McCoury is a familiar one. A long-time friend and inspiration for Dierks, bluegrass legend Del has made numerous appearances in support our DBC President--like the time they performed Rovin' Gambler, and when Del appeared on the Up on the Ridge album for "Pride (In the Name of Love)," or even as recently as last year when they sang the National Anthem.

This time, it was Dierks' turn to show up to honor Del; he did so by helping celebrate Del's 80th birthday. Surrounded by family and friends, Del celebrated the best way a musician can--on stage at the Grand Ole Opry. Entitled the "Grand Del Opry," the Feb. 13 event hosted artists such as Sam Bush, Vince Gill, the Travelin' McCourys and more. It felt natural when Dierks' name showed up on the set list.

Just like it felt natural to know we had DBC reps in the audience! Mary Lou Greene, DBC rep from N.C., immediately knew she needed to make the trek to Tennessee. After seeing her photos, it was clear her story needed to be shared! Here's an interview about her Dierks and Del adventure. 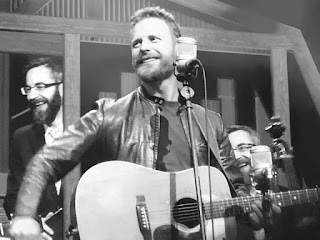 How did you hear about the Grand Del Opry event?
I follow Grand Ole Opry on all the socials, so I saw it as soon as it was announced. Dierks was not on the initial list of artists. My immediate thought was, “Wow, I would love to go,” but saw it was a Wednesday night PLUS I already had plans to fly to Nashville the next Wednesday, Feb. 20, for Dierks’ show at Bridgestone. In the back of my mind, I kept thinking about it.

You scored the front row! How did you manage that?
When the announcement came out that they had added Dierks to the show, on Jan. 23, I immediately went to check for tickets. And there it was--a single seat in Section 4, Row BB, Seat 9. Front row. It was kismet. And that ticket was mine!

What was the most memorable part of the night?
There were so many. I have a photo of Dierks and Del that captured it. The photo isn’t great but I will always remember it. Everyone came back out for the final number, "I Saw The Light." If you grew up in a Southern Baptist church like I did, you knew the words to this song by the time you were four, so that was incredibly special. And to look around at the talent on that stage, it was absolutely mind blowing. I had goosebumps from the minute the show started. 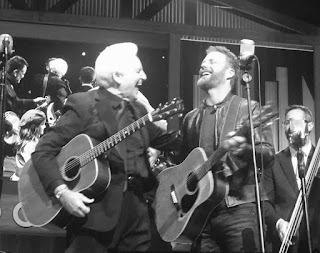 Have you always been a Del fan?
I hate to admit this, but no. Just like I wasn’t always a huge Dierks fan (gasp). I grew up on country music. I was card-carrying member of the Loretta Lynn fan club when I was four. My mom took me to tons of country shows. In my teen years, I was a die-hard Alabama fan. Then I sort of lost my love of country music, not completely, but I just sort of became disillusioned with the plethora of music that all sounded the same. The story of me finding Dierks’ music is a long one, but let’s just say, when I fell, I fell hard. I saw the videos of him with Del McCoury and the Travelin’ McCourys, so when they were scheduled to play a show at a tiny venue in Mt. Airy, N.C. (about 45 minutes from me), I knew I had to see what this was all about. Growing up in rural North Carolina and Virginia, bluegrass music was all around; I clearly just never appreciated it. That show, though, at The Earle in Mt. Airy, made me a believer! I also met both Del and Ronnie McCoury before the show and got my picture with them. I have seen them three times since then and am always blown away at the music. There is nothing smoother than Del McCoury’s voice. 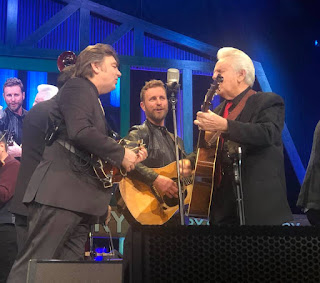 What was the most special Dierks and Del moment of the evening?
Just seeing the way they respect each other. I mean, there was like joy oozing from the stage that night on all parts. Dierks, especially, seemed so happy and at ease playing up there next to all of the McCourys and Sam Bush. Dierks said he would not be doing what he is doing without Del, so we Dierks fans owe Mr. McCoury a huge thank you. 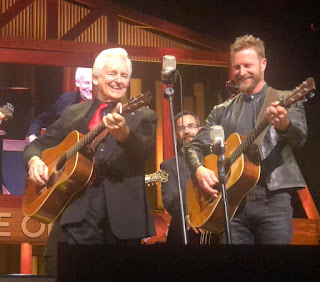 What is something you saw from the front row that others further back might have missed?
I was so grateful to have snagged that front row seat, and as it turns out, the seats on each side of me were sold as singles as well, each to huge Del fans, both from W.Va. The guy to my right, Heath, has seen Del about 60 times and is the epitome of a Del-head. ... They come out before the curtain goes up to sort of warm up the audience ... Heath won a signed Hatch Show Print before the curtain went up by answering the trivia question: “When did Del McCoury first play the Grand Ole Opry?” Answer: 1963. ... I actually got to sing in the microphone (apologies to anyone who might have heard it!) and they announced my name and state. My 30 seconds of fame at the Opry.

The other moments I saw and tried to capture were when they were all on the stage for the final number. At one point, Dierks was in the back row with Sam Bush and they were interacting and laughing. Again, pure joy. 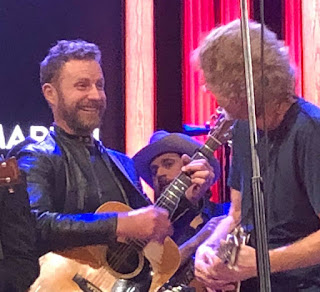 Are there any other special moments that took place that night that you’d like to share?
Dierks said when he walked into the Opry that night [that the co-writer of Up On the Ridge, Angelo Petraglia, was in the house] so he had him come out for UOTR; [Dierks] took his guitar off and gave it to Angelo to play. That was pretty special. I don’t think I have ever heard UOTR without Dierks playing his guitar, though. I found it is incredibly difficult to stay in your seat for UOTR! I was dancing IN my seat! You know there is protocol and proper demeanor expected at an Opry show! 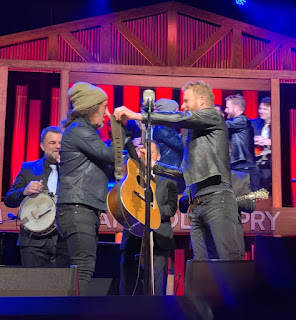 It looks like you ran into Dierks on Valentine’s Day! What did he say?
Seeing Dierks on Valentine’s Day was the icing on the cake for that trip to Nashville. I knew he was playing a UMG show for Country Radio Seminar that Thursday morning at The Ryman Auditorium and I also knew he had a show in Ontario, Calif., that night. The show started at 11:30 a.m. so I kind of figured he would be one of the first ones to perform. My son, his girlfriend and I had just Ubered downtown to get a Valentine’s special latte at The Well Coffeehouse (chocolate strawberry – yum!), which is like one block up from the Ryman, then they wanted to go boot shopping. The timing just happened to work. We were walking by the parking alley next to the Ryman and he was coming out, white guitar case in hand and all. So I stopped on the sidewalk and he stopped as he was pulling out. He was like, “What are you doing here?” and to be honest, I have no idea what I said. He didn’t have long as he was headed to the airport to head to Calif. I told him we would see him next week at Bridgestone. He was super sweet and nice, like always. And he was off, in a hurry to get to the airport! And I realized immediately I forgot to wish him a Happy Valentine’s Day! 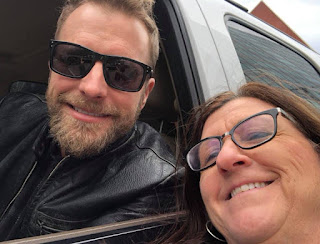 Valentine's Day wishes or not, what a perfect weekend at the Opry!

Thank you for sharing your story and photos, Mary Lou!