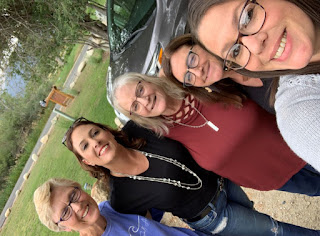 Dierks Bentley is our inspiration.  So when five of us DB Congress reps were asked to be a part of the Dish/Live Nation Home Town TV segment for Dierks the day before the 2019 Seven Peaks Festival, we jumped at the chance!

Below are the transcriptions from Dierks' segments:

One of the really unique things about country music is obviously the connection between the fans and with the singers and with the band.  Certain towns have certain people you see, the front row I'll look down and I'll see people I recognize for years they've been coming out since I played bars and clubs and there they are in the front row  and so its just a really beautiful thing that exists I think only in country.

As a country fan myself I meet somebody and they love country music we automatically have so much in common. I mean right away it’s like wow we’re friends. We could go have a beer and like talk for hours about artists we love.  And a lot of the music is so story based and it makes you start talking about your life and how a song affected your life and if you love country music it’s an instant bond with a stranger and it really brings people together.  It’s an unbelievable community I feel so honored to be a part of.

If you are on the road a bunch, you know, you try to find ways to bring little bits and pieces of home with you. Sometimes that is literally bringing home with you. The kids come out on the road…obviously my wife is there. So, we’ll have my three kids – sometimes they bring friends and so its pretty chaotic backstage but its so fun. I feel really lucky to kind of have, like, you know, two families – obviously, the one back in Nashville, my real family, but also my road family which is very important to me. It's just a chance to be present in these great shows, great venues – all leading towards a great end of the summer party at Seven Peaks.

It's just such a great location. I mean, it's just...this is a place that I've said, even if there wasn't any music there would be a reason for people to come together and hang out, it's just so beautiful. Seven 14,000 foot mountains you can see from the festival grounds. It's just a great way to spend time with friends, family, other fans meeting together here. That means a lot to me.


MARY LOU - Once we got to know each other, it was so much more than Dierks.


As an artist, somebody who gets to sing every night, one of the greatest compliments when we see other fans, people make friendships through your show.  People that never knew each other and because of your music, maybe because of your fan club, they became like lifelong friends.  I've had families started from our concerts so it's pretty humbling for the music and for what we've created out here to be the centerpiece of a lot of people's lives in some ways.

As a fan, when you go to a show, you want to at least believe the artist is like, this is a special show for them. I always think of Red Rocks and Colorado's one of those places that brings out the best in every artist that plays there. And I like to think that Seven Peaks is like that as well. YOu know, this amazing setting, you're looking at all these mountains!

RENEE - It doesn't matter if you're local or not because the locals welcomed everyone from all over the country - one giant family.


You know, those songs are what, how we communicate our feelings. Those singers, those songwriters - they say what we can’t.


NANCY - Amanda story/ it was tough to lose a friend so close to me and one of the things that helped me get through it was Dierk's music.


Every night, back stage, I have a meet and greet and I'll meet 60, 70 people and I've heard stories about songs and how they've changed peoples' lives, whether it's putting the song title on a poster or a direct story about a brother over in Iraq and this song is what helped them get through or someone has cancer or a song like Riser or I Hold On. They're telling you these stories with tears in their eyes. I can relate to that because I love this music, too. There's no other genre that has the song writing craft that country has. Every word is thought about and anguished over and how that word ties to the next word, and how it ties to the sentence, and does that tell the right story for this verse leading into the chorus, and the second verse is going to take the story to another spot, and the bridge is going to make the magic happen. I mean, it's such a craft and that has power.


NICHOLE - and son, Justin "It was only a mountain"  - we gotta get that tattoo!


Every night  I meet people who say something great about a song of mine and it means a lot to me and I take that story on stage and I think about it when I'm singing that song and I think that energy really translates in unseen ways when it happens.

I feel like at Seven Peaks, people are living! You know, they come out there and they're committed for a weekend and they're in the mountains, in the moment, in the music. And I just hope those moments right there translate in bigger moments in their life and they just feel inspired to make changes in your personal life, or you're more grateful for what you have, or just to leave this experience transformed in some way and take whatever you had there back to your community and take a little piece of Seven Peaks with you.  That's my goal for it.


MARY LOU - Dierks is everything this festival represents

RONNA - the mountains and the fresh air and just having that experience with your friends, and just...living!


I love it when someone comes up to me and says, “you know, I grew up listening to your music and, you know, touring with you, I’ve learned so much from the way you tour and your crew is awesome and everyone treats us so well out there.” That’s like the biggest compliment you can get. You know you treated people well enough that they remember the way you made them feel – that’s something that I strive to do. I know everyone in my crew. They are, kind of, the face of the organization and they do a really great job of just being super, over-the-top kind, courteous and helpful in any way they can be. So that’s the legacy we want to leave behind.