Spring is here and that means March Madness! DB Congress is getting in on the Bracket action--Dierks Bentley style!

Here's your chance to make your voice count by voting for your favorite singles in Bracket A vs. the album deep cuts in Bracket B. 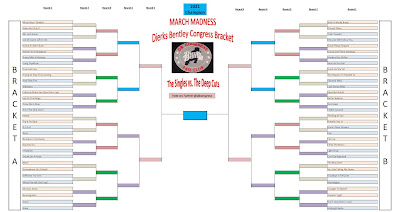 Every round, your votes will bring us closer to the Championship song!

In Round One, fans can vote via Twitter* for 16 Dierks Bentley singles matchups and 16 deep cuts matchups.  The results will be up for vote in Round Two and so on! In Round Five, the final single and final deep cut will battle it out for the Championship Dierks Bentley Song!

Don't miss out on a chance to win a Dierks Bentley "Gone" Tshirt after each round, and a surprise Grand Prize when the Championship Song is announced!  All you have to do is follow @dbcongress on Twitter and retweet the song you voted for and include #DBCBracket in your tweet. Random drawings will be held after each Round.

*Sponsored by DB Congress; Twitter is in no way affiliated with this contest.