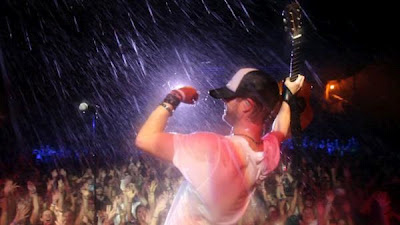 Rain may be a good thing for Luke Bryan, but the wet stuff sure tried to deter Dierks Bentley from performing his full set of songs during the last two weekends in Missouri, Wisconsin and Illinois.

While a St. Louis storm under The Arch forced Dierks and Dude Inc. off the stage about four songs in (see DBTV below), The sweet release of rain on Friday (the 13th) night in Wisconsin didn't slow him down. According to one fan in the crowd, Dierks told them their equipment could handle it so they all proceeded to get soaked to the bone.

Dierks tweeted after the show:


"crazy night here in wisconsin. played in the rain til the gear stopped working. many little (wet) white tanks and t's!"

One of our new followers on Twitter, Matthew Kessel Lyon‏ @mcklyon, tweeted:


"I've been to literally hundreds of concerts, but @DierksBentley just played the BEST. SHOW. EVER. In the rain!!! ‪#JeffersonCounty"‬

In DBTV - Episode 70, Dierks and the guys travel from Canada to St. Louis, where they get rained out.  Maybe doing their pre-show all hands on "Fifty Shades of Grey" wasn't such a good thing! Could Dierks be studying to play the lead role in the movie? Nah!

Dierks finishes out this weekend with The Taste of Chicago this afternoon in Grant Park.
Posted by DB Congress at 7:52 AM