Levon Helm, a much loved individual in the music industry passed away in April 2012. He was probably most widely known as the drummer for The Band. Mr. Helm also owned a recording studio (the barn) in Woodstock New York, where since 2005 he held Midnight Rambles, where many musicians came to play with him.  More than anything, Levon wanted the music to continue. He wanted the barn to be host to artists from all walks of life, from all genres.

In order to keep the barn running and to honor Mr. Helm, the benefit concert, "Love for Levon" was held on October 3, 2012. Our DB Congress President (Dierks Bentley) was one of the musical luminaries asked to play at this event from extremely varied genres. Dierks told ABC News:

“When the opportunity came up, it was kind of a no brainer even though the schedule’s really pretty packed, I definitely wanted to squeeze that in and find a way to make that happen.”

He added that he often listens to The Band on the tour bus and appreciated getting the chance to play.

Dierks played during the second half of the event. He was one of only five artists, including Eric Church, Roger Waters and Joe Walsh who performed two songs. He also brought with him his friends Jessie Alexander and Jon Randall to sing back up. The Levon Helm Band provided back up for every performer there that night.

The second was "Chest Fever" on which he was accompanied by Garth Hudson, The Band’s keyboardist. American Songwriter called it “one of the most surreal moments of the night.”

The people sitting around me had no idea who this 'Dierks Bentley' was, but after his songs they only had praise for him as they told me: “that Dierks Bentley was very good,” “I will have to check him out,” and “He impressed me.”

Everyone came out for the finale. Dierks was grouped with Eric Church, Jon Randall and Ray LaMontange. As always, it seemed Dierks was having a fantastic time. Goofing around with friend Eric Church onstage, their good time was contagious. He tweeted a picture before hand.

I always love a DB concert, but it's experiences like these that impress me and make me proud to be a DB Congress member. 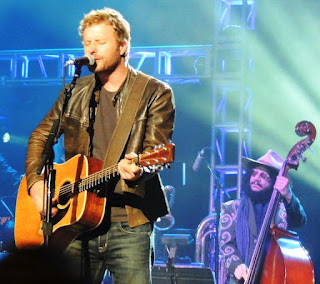 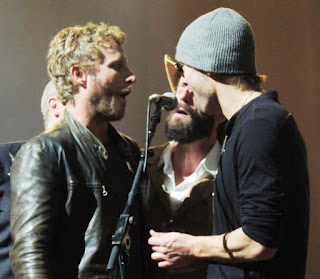