Thursday night in Macon Georgia was not just a typical stop on the Locked and Reloaded tour. Of course the show was amazing, the guys were high energy, Dierks gave away a guitar, but Dierks and the guys ended with a surprise; for both the audience and a certain member in it. See, Nick Malloy, a long time friend of  DB's lead guitarist, Brian Layson (from Macon, like Nick) and Dierks was there at the concert that night with his father. As Nick told WMAZ in Macon:


"I was sitting side stage last night, and Dierks tour manager, came and unlocked my wheel chair and wheels me out there." 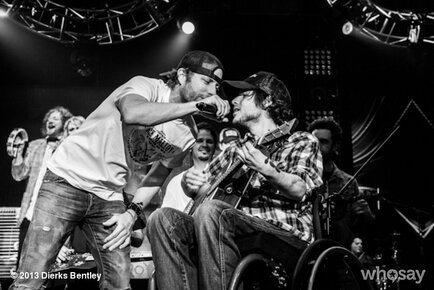 Before he knew it, Nick was out there playing and singing along with Miranda and Dierks to Bad Angel. Unfortunately, Brian was ill and unable to play that night, but sent his love along in a tweet:


“@NickMalloy You deserved it bro. Sure hate I missed it. Much love to ya”
Dierks tweeted the above photo adding:

"meant alot to me and @mirandalambert to close the show with @nickmalloy on stage."

Nick said that his father, Frank, who had met Dierks for the first time that evening, knew of the plan but kept mum. The icing on the cake was that Dierks and the guys were all wearing Nick Malloy Band t-shirts for the encore, which made Nick’s father tear up.

Frank Malloy has worked at WMAZ for 30 years. He was first sports director and then in 1993 went on to anchor the evening news, a position which he still holds today. He said, "I know how much Dierks and the band mean to him (Nick), but to find out last night how much he means to them, and then for them to go out of their way to do this. It was just a neat moment. It gave me a sense of peace. That we’re going to get through this thing."

Almost a year ago, Nick Malloy was in a very serious one-car accident in Macon. He was driving home on little sleep after a gig in Macon around midnight. He fell asleep at the wheel, hit a tree and crashed into a ditch. He was there trapped in his car for six hours until daylight came and a father and son saw the wrecked vehicle and called 911. His injuries were serious: an incomplete fracture of T8 spinal cord injury along with much damage to his left hand and arm and paralysis of his legs. This happened on Nick’s 23rd birthday, March 28, 2012. He spent months at the Shepherd Center and graduated from day treatment rehab this past August.

Nick got his first guitar at 13 and started playing bars at 15. He had a promising country career with an EP (available on cdbaby.com) produced by Brian Layson with lots of gigs lined up through 2012. But the “physical and emotional toll of the accident” halted his promising career. Hopefully being up on stage this past week will help to change that. Nick himself said,


"I gotta find the spark again. Hopefully it will be soon. Last night was a major help." "It's humbling, and it makes me want to get back out there."

"They want something in exchange. I think Dierks and guys, they're doing this but I think they think Nick, you can do it, and we want you to do it. You gotta just get out there and wade in, and just get back on that path."
We are all rooting for you Nick. You are incredibly brave and resilient. We hope you resume making music again, there are alot of us out there who want to hear what you have to play.


You can find the Nick Malloy Band here.
And thank you Dierks and the guys for being so generous and having such huge hearts. Time and time again you give us all more reason to love ya.