Tennessee DB Congress rep, Alicia Alarid, is our guest blogger today! She agreed to share her unique, "surprise" experience with us! 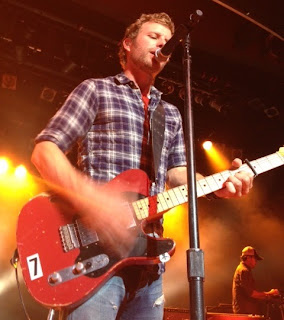 "This past Sunday my husband and I went to the annual Dollar General Literacy Foundation event at The Wildhorse Saloon in .  We have gone to this event numerous times over the years and there is always a “secret” entertainer that they keep very hush-hush.  We have seen some great acts like Sarah Evans, Darius Rucker and Blake Shelton to name a few.

Every year I try and snoop to see who the entertainment will be to decide if it is worth the time.  This year a little birdie told me they heard it was “Dierks something or other.”  I almost died!  I was unwilling to believe it 100% as I had been given bad information in the past, but of course I checked Dierks.com to see if it was even possible, and he wasn’t otherwise engaged.


When I arrived downtown my first order of business was to do a drive by and look for Old Goldie (tour bus) or Big White (Dierks' truck).  Nothing.  My heart sank.  I thought for sure I had been fooled.  When the doors opened we went inside and I cased the stage.  Everything was covered, except for orange amps stage left – I started feeling a little more at ease.
We went upstairs and did the required chit chat, etc., as this was after all a work event.  Then I saw some movement on stage – someone brought out a very rough looking acoustic Martin guitar, and that was it – I was down in front of the stage in seconds.
Once the DG people did their business and finally announced the artist, everyone filled in around us.  (I obviously was the only one that had some forewarning).  It was fantastic!  We were right up front, mic stand in our faces.  Dierks and the guys were amazing as always--he really knew how to grab the attention of those who had no idea who he was.

Honestly we were so close that we were behind the speakers and could not hear any of the vocals at all (not a problem when you know every word) but it was so worth it.  Dierks was extremely interactive with the crowd, lots of fist bumps, high fives, and he even took a sip of my beer!  It was an amazing evening.

At the end of the show I asked him if I could have the set list and he pulled it up and went back and signed it and brought it back.  Somehow I even managed to come home with three different picks, but in all the excitement I don’t even remember getting them! 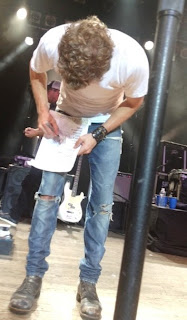 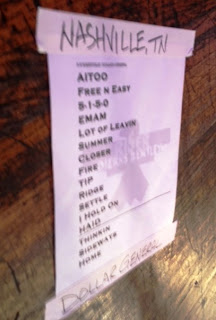 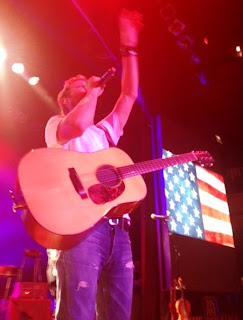 It was a great show, but unlike the many others that I have been to, most people there did not have any idea who Dierks was.  This was an event with people coming in from all over the , most of them in their 40’s and 50’s (and beyond) that don’t follow country music.  Dierks was able to pull all of them in, and from what I could tell by the reaction after the show they absolutely LOVED him.  It was a great opportunity to gain new fans and of course Dierks nailed it!"
Posted by DB Congress at 8:55 PM