Dierks Bentley On Another Level for Opening Night of the Mountain High Tour in Columbia, MD

Dierks Bentley was nine songs into his opening night of the Mountain High Tour before he drew a breath.

"I didn't get a chance to introduce myself....Hi, I'm Dierks Bentley, I'm your lead singer tonight and you guys are amazing.  You guys are so incredible I cannot believe ...just blows my mind you guys are all here, everywhere, alright! up top!"

The Merriweather Post Pavillion was a gorgeous setting, and the fans in Columbia, Maryland on Friday, May 18, 2018 didn't seem to mind the rain to have the chance at the Dierks Bentley Mountain High experience.

All six 'Team Dude' members managed four costume changes (and wigs) in record time from the VIP 'mountain-clad' acoustic set, to 15 minutes later opening for LANCO in overalls as "The Maryland Monroes," then the new set, and a psychedelic '70's-themed encore--complete with platform shoes, bell bottoms and oh, yeah, a pilot's uniform.

The VIP acoustic set started out with stripped down versions of 5-1-5-0, Up On the Ridge, Drunk On A Plane and new from The Mountain album, "You Can't Bring Me Down." Fantastic fiddle playing by Dan Hochhalter! At one point, someone in the crowd was face-timing and Dierks took the phone and introduced the band to them. Dierks on the mandolin was having a blast, then traded with Ben Helson for the guitar.  Thank God for the versatility of this skillful group of musicians! Check out the VIP acoustic videos on our DB Congress Facebook page! 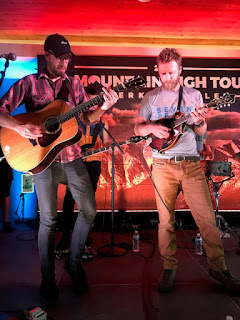 It's 9:20 pm and the lights go dark.  The intro music starts..."Well I bet my soul on a six string gamble, and I climbed like hell through the brush and the bramble. Even though I had my doubts, told myself, don't look down, and I turned that hill into a pile of gravel.  It was only a mountain, nothing but a big ole rock.   Only a mountain,  it ain't hard if you don't stop.  It just took a little step, a right then a left then a couple million more, who's countin'?  Hell, it's only a mountain, Hell, it's only a mountain...then BAM! An explosion --90 seconds of electricity and elaborate new lighting (compliments of Chris Reade), and live electric guitars, drums, bass, and banjo. Dierks, Ben Helson, Cassady Feasby, Dan Hochhalter, Steve Misamore and Tim Sergent rocked 'The Mountain' hard, straight into the next song--I Hold On.

Transitions were tight--they never stopped playing. Ending each song on the same note the next one began--seamless.  Before Somewhere On A Beach, Dierks quipped, if you want to climb a mountain, you gotta start at the bottom, you gotta start at sea level before you reach that altitude. The wild drum sound of Woman, Amen was augmented with LANCO and Brothers Osborne drummers in addition to Bentley's own Steve Misamore and perfectly positioned Black as the chaser.

Burning Man brought Brothers Osborne to the stage again--a much anticipated number since the Brothers are featured on the album cut.  And many DB Congress reps heard it live first in Vegas in December 2017. Ben Helson and John Osborne killed it while Dierks,  jumped up and down excitedly:

Ridge took a turn to Hillbilly Shoes (a nod to Montgomery Gentry), spotlighting the vocal talent of bass player, Cassady Feasby. "You think you know me, but you ain't seen nothin' yet.  Til you walk a while, a country mile in my hillbilly shoes, he belts out while Bentley harmonizes with background vocals:

So how did the tour name come about? Dierks tells us.

"Ah man, we've been off the road for a while...this is our first night of the Mountain High Tour.  I got a record coming out called The Mountain, so me and the guys we're responsible for the "Mountain" part of the name, Brothers Osborne are responsible for the "High" part of the Mountain High Tour.  Pretty good, right? We're just so relieved to be back on the road, this is where we love to be.  We had to take some time off to try to make the best record we could, but we missed you guys, miss being around you guys."

"It was a crazy year last year, it was a hard year for a lot of us in country music, in the country music community and a lot of difficult times out there that we all went through together.  I was meeting earlier tonight with a girl who was here with her family and its her first concert back since Route 91 and I want to recognize her and her family--thank you for coming out tonight and letting us be your first concert since then--really means  a lot to me and the guys that you guys came here."

"I know everybody here, you all have your own mountains you're climbing, your own personal battles, and I tell you the one thing I know is that country music fans have more perseverance and determination than any people I've ever met in my life and we're gonna send this song to all you risers out there tonight--this is for you guys, you are risers, there's nothing you can't do, nothing we can't get through together. Isn't that right?"

Am I The Only One? allowed the guys to all sit down for a minute (whew!) on the new stage with a U-shaped set of lighted steps, and Dierks introduced each of them, then strolled out to the B stage for Tip It On Back--a perfect fit for the fans on the lawn- and Say You Do, before heading back to the main stage for Living, Thinking and Sideways.

When darkness comes to town, I'm a lighter...the stage goes dark for a short time and then a 70's clad crew come back for the lively Drunk On A Plane encore and suddenly Dierks is maneuvered high up in the stage clouds for the Mardi Gras tune in a make-shift plane.

As if our clear eyes weren't even blinking, it was over, leaving us with a heart full of grateful for all Dierks and his crew gave us tonight, an uplifting evening, allowing us to feel that fire we've been missin', we were living!