Dierks Fan Club Members Are There When Others Need Them

Because of Dierks Bentley...

For a few years I have been a member of the DB Congress, and over these years, I have made some great friends. These friends have become like my extended family. We send each other birthday cards, Christmas cards, get well messages and text/facebook/tweet each other on a daily basis. The DB Congress is the one fan club, that seems to always stick together when a fellow fan club member is going through some rough times in their personal life. 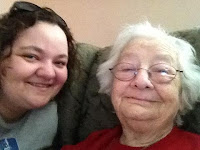 Recently, I tweeted that I needed prayers for my grandmother who is 82 years old. She had become sick, and was having medication reactions. Several DB Congress members tweeted me back and some texted me to say that they were praying for her. I was so blessed to know that just because I tweeted "Prayers needed for my grandma" so many people who have never met her wanted to send their warm thoughts and prayers to not only her, but myself and my family.

We thought we had it all figured out and my grandma was going to be okay. Then this past Tuesday, I went to my hometown to see her and take her to run a few errands. When I got there she looked really sick. At first, grandma didn't want to say anything, but I am one who never gives up on her. After about five minutes, I finally got her to say that she had fell and hit her head really bad. Since I come from a medical background family, I knew by looking at her that she needed medical treatment. I knew I could get her to the hospital quicker than the EMS could get there, so I rushed her to the emergency department.

When we got there, they automatically took her back and began ordering multiple tests. Knowing that it had been about four hours since the fall, they were trying to make sure there was no internal bleeding. The moment that we got back the room, I began texting my family and letting them know what was going on. Then, I tweeted that once again I needed prayers for my grandma.

It wasn't but just a few minutes until my phone was buzzing letting me know that I had been mentioned on Twitter. Before I could get it unlocked, more messages were coming through. Several members of the DB Congress were tweeting me and saying that they were praying. So of course, I responded by saying thank you.

It wasn't too long that I began receiving text messages from some of these fans, asking how my grandma was doing, did I need anything, etc. My grandma heard my phone buzzing a lot and said is that your sisters messaging you. I replied, a few of them are from my sisters, but the others are from friends. I told her about how I had asked for people to pray for her.

She simply replied, "you mean, there are people I don't know praying for me?" My response was "yes ma, lots of people!" She started getting tears in her eyes, and I asked if she was in pain. She said "no, I am just amazed at how I don't even know these people, and you haven't known them too long, yet they are concerned for me...like a big happy family." I told her, well the DB Congress sticks together no matter what.

A few minutes later, grandma started getting a little worse. So the doctors had to run more test. I wanted to boost her spirit a little, so I told her that if she could be strong, and make it, I would make sure that she became a member of the DB Congress. To my surprise, she laughed and said, "you mean there is no age limit?" I replied by saying "no there isn't." She just smiled.

While we waited for the test results to come in, some DB Congress members tweeted and text me asking for updates. And just like they were family, I keep them updated every step of the way. When the doctor's finally decided to let me grandma come home, as long as someone would be watching her, (since she was diagnosed with a severe concussion) the first words out of my grandma's mouth was "you better message all your friends the good news." I knew right then, she was talking bout the DB Congress. So I messaged everyone and everyone messaged back and said they were happy my grandma was going home.

Since then, these fellow DB Congress members have still been asking about my grandma. I feel so blessed to have such great friends, because of Dierks Bentley. I know without a doubt, they all were praying and getting others to pray for my grandma, and still are. Since coming home, my grandma's main doctor has told us that we need to spend as much time as we can with her, because he feels that her time is near because of her recent declining health.

And like a lot of people I didn't want to believe it. Last night, my grandma told me she dreamed of my late grandpa and he said she didn't have much longer to battle this war. She told me I needed to be strong, keep my head up, and always follow my dreams.

Over the past two years, my grandma has become a fan of Dierks Bentley (hmm I don't know why that would happen...lol). I have bought her every copy of of his albums and she listens to them daily. About a week ago, despite being sick, she heard a song on my I-pod playing, and said what song is that? I told her that it was "The Heaven I'm Headed To" by Dierks Bentley.

She looked at me and said "Adrian make me a promise that when I die, you will sing this song at my funeral." Of course, I told her to quit talking like that, because she was going to be around for a long time. Again, she said for me to promise. So I said, I promise grandma. She later told me that she was glad that I had met Dierks, and that she wished she could meet him, but she didn't think that would ever happen. I told her that I would try to get her to a concert, and she said okay.

After the recent medical issues, the doctors have advised us that she can not travel any more than one hour. So now, it's becoming a challenge to get her to meet someone that my grandma is a fan of.

Even though she isn't a member of the fan club yet, my grandma wanted to send a few words to the fan club.


"I would like to thank all of the friends of my granddaughter who have prayed for me. I have never met you, and probably never will, but Adrian tells me that you all are the best. I do not know if I would of made it without all of the prayers, so thank you. It's good to know that Dierks has such a loyal group of fans. I wish I could send you all cards or letters thanking you, but it is hard to say thank you for praying. But I just wanted you all to know that I am so blessed to know that there are people out in the world who care about people they do not know. Thank you again, and God Bless each and every one of you. --With love, Juanita Roberts"

Personally, I want to thank a few of the DB Congress members, for asking about how not only my grandma is doing, but how our family is holding up. Even if I forget to send them a daily text, they will message me and ask. So a big special thanks to: Sherrie Shamon, Lee Ann Boyle, Harriet Watkins, Tara Joant and Mustachedan, you all have been my rocks during this time. Whether it be from chatting on facebook, tweeting or texting anytime I needed you, you were there. And I really appreciate it and there is no way that I can say thank you and tell you how much your thoughts and prayers and concern has helped all of our family during these struggling times.

With my grandma not knowing if she will ever get to meet Dierks, she asked if there was a way to send him a card to tell him that he had a good group of fans. I told her I was sure that we could send him a letter. So today, I got an email back from The Green Room, The Grand Ole Opry and The Ryman, all saying that whatever my grandma wanted to send, to send it, and they would make sure that Dierks receives it.

When I told my grandma it was time to write Dierks, she smiled. She then said that she was one step ahead of me. She handed me a notepad and on it, was a letter written to Dierks. I told her that tomorrow we will mail it. I noticed she had mentioned the DB Congress and Dierks' father in it.  In the letter, my grandma wrote:


"I can never repay your fans for the prayers that they have prayed. And despite never meeting you, I want to thank you for being a great artist. My granddaughter told me of your father's passing a few months back, so in honor of your fan club, I am donating money to the Hospice and the Wounded Warrior Project."

This is my grandma's way of saying thank you to each member of the DB Congress. Again, I want to thank you all. You all are the best!