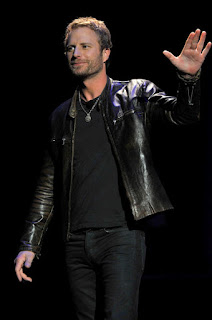 At the untelevised ACM Honors last night at The Ryman Auditorium, Dierks Bentley played humble host to his heros, as the pioneers of country music performed and received well-deserved awards.

DB Congress rep, Ali Rae Satter, was able to be there in person and capture this audio of Dierks singing, "I Don't Care," a tribute to Ricky Scaggs.

Ali also tweeted all throughout the evening.  One of the best laughs of the night had to be when Dierks joked, "What does a Motel 6 and Luke Bryan's pants have in common? No ballroom."

"When I first came to town I had no money, so I was playing for tips down on Broadway in this little club.  One night I look up and Vince Gill walks in, and he played with us for an hour and 22 minutes. I know because I kept looking at the clock thinking, why is he still here? That demonstrates the goodness of Nashville and all the people who are here for the music."

When Vince got on stage, he replied: "On my way home after playing with Dierks, who I didn't have a clue who he was at the time, I told Amy, 'You know that guy playing guitar has that 'thing.' I think something good will happen to him."

Check out a more detailed recap at The Boot.