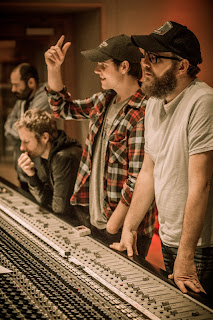 Dierks Bentley says he threw away the playbook again for his upcoming album, "Riser."

“I’m working with a different producer, different engineer. Just different songs, man, and it feels really fresh," Dierks tells KMLE. “I’m always trying to search for some new angle,” he said of the writing and recording process. And so for Riser, “just because of where my life is right now, with my dad passing away, and getting a little older, there’s more depth I can dig into. So it kinda has that layer on top of the other stuff.”

That new producer is Ross Copperman (plaid shirt above, Dierks is to his right).  You'll remember him as a co-writer on Dierks' Top Five single, "Tip It On Back."

Ross' own songs can be heard on television shows like "The Vampire Diaries" and the new ABC show, "Nashville."  We're very excited he agreed to yet another exclusive DB Congress interview with us, giving us a lot of great insight into the production of "Riser!"

DBC: Since our first interview with you about co-writing “Tip It On Back,” you’ve been a busy guy! Co-writing, producing, recording your own songs…which of the three is your favorite and why?

RC: I actually need all 3 to keep myself creative. It's nice to be able to spend a week writing, and then spend a week in the studio. I try my best to keep it balanced so I can give everything 100 percent.

DBC: Congratulations on your recent nomination for Breakthrough Songwriter of the Year from Music Row! The award honors a songwriter who for the first time wrote or co-wrote a Top 10 song (“Pirate Flag,” recorded by Kenny Chesney and “Tip It On Back,” recorded by Dierks Bentley). How do you feel about that?

RC: Being nominated for Breakthrough Songwriter is a huge honor for me. It's the kind of thing I've worked hard for over the past 8 years. It's humbling to be in the same category with some of my good friends and talented artists/writers.


DBC: Your own songs as a pop-rock artist, “Holding On and Letting Go" has been featured all over television the last few years: CSI: NY, The Vampire Diaries, The Biggest Loser, and in earlier years you and your songs were heard on ER, Ghost Whisperer and One Tree Hill. What did that exposure do for your career?

RC: I like to write for tv/film as often as I get the chance. Unfortunately I haven't had that much time to focus on it the past few months. I've actually been tied up working on the tv show, "Nashville." Looking forward to doing more work on season 2.


DBC: How did your “producer” role for “Riser” come about? Did Dierks call you? What did that conversation sound like?

RC: Arthur Buenehora (executive producer) and Dierks decided they wanted to try something different for this record. They stepped out on a limb with me and took a chance. This record was a collaboration at it's finest.  We all really had a strong vision for "Riser," and it's been an incredible journey.

DBC: What does a producer really DO?


DBC: How different was it for you producing a country album?

RC: I try not to think about albums in that way. I don't like to be restricted by genres."Drunk On A Plane" actually has an 808 kick drum and a fiddle.

RC: An 808 is a kick drum that's been mainly used in Hip-Hop and Pop, but lately it's been creeping into country music.

DBC: What project (as a producer) are you most proud of?

DBC: We’ve seen a list of possible songs for the album and eight of them you co-wrote with Dierks. How was working with Dierks different from a production standpoint vs. co-writing with him?

RC: Dierks is a dream to work with. Writing with Dierks is great b/c he really brings it. He's a phenomenal lyricist. It's cool b/c I get to work on the track while he's back there thinking of genius lines. In the studio he owns it as well. He likes to get out on the floor with the band and sing scratch vocals of every song going down live. Most artist's don't like to get their hands dirty. Dierks is just a good dude. Honor to work with him.

DBC: Which of those songs that you co-wrote with Dierks and others made the album or do you hope makes the album? (Boom, Damn These Dreams, Five, Here On Earth, Something Worth Saving (that also included Pirate Flag co-writer David Lee Murphy), ‘Til You, Walking a Wire, Wanna Know How You Feel).

RC: I'll let it be a surprise for when the album drops.


DBC: How "hands on" was Dierks in the production process as compared to other artists you have produced.

RC: Dierks gets right up in the process with me. He spent many days and nights at my studio adding parts, whether it be a guitar part that he came up with, or a BGV [Background Vocal]. He really took the songs to the next level. He's got great vision and clarity.


DBC: We are really interested in all the different venues you and Dierks recorded in, vs. the traditional studio. We understand some songs were recorded live with the band “as the musicians laid down the tracks.” Does that mean THE band --Cassady Feasby, Dan Hochhalter, Brian Layson Steve Misamore and Tim Sergent? If so, we could not be more excited! They are one talented bunch on stage!

RC: Most of the record was tracked at Oceanway A, which is a legendary studio. In my opinion it's the best drum room in Nashville. The band was actually Craig Wright on drums, Lee Hendricks on Bass [both from Eric Church's tour band], Jedd Hughes on Guitar, Dan Dugmore on Steel, and Bryan Sutton on Acoustic. There was a song called "Here on Earth," that we wrote and cut Dierks' final vocal on his bus Goldie.

DBC: Sounds heavenly! We hope it makes the album!

DBC: Tell us about the song(s) recorded on Dierks’ tour bus—as in “Old Goldie?” There’s not a lot of room on a bus, did you record those acoustically?

RC: I had a few guitars out there on the bus and I programmed the rest. We ended up recutting drums and bass in the studio, but I kept Dierks' vocal from the bus. I always believe that you never sing a song as good as you do when you just finish writing it. Dierks wanted to go eat lunch but I asked him to give me one scratch vocal first, and luckily we did it b/c that became the final vocal.


DBC: Still others were cut at your house with you “at Dierks side, pushing him to some of his most emotional, and seasoned, performances,” according to the press release. What songs did you record at your house? We’re guessing, “I Hold On” was one of them, given the personal meaning to him after his dad’s death.

RC: All the rest of the vocals were cut at my studio. Dierks felt really comfortable at my studio b/c we were cutting vocals in the same room. There was no glass separating us. Jake came to the studio most of the time and just sat at my feet while we cut the vocals. I've got my vocal chain dialed in to where it sounds very inspiring for the artist to sing.

DBC: What do you mean by "vocal chain dialed in?"


From the press release:

“It’s not even really a studio,” Dierks says of Copperman’s set-up. “It’s just kind of a corner of the house he’s taken over, so there was a kind of intimacy to the vocal process. It was important to get out of the studio and sing in different places, and to do it with other people in the room. That way, you have an audience and you get a sense of what’s working, what’s not working, when it’s feeling good, not feeling good. It brings a little more emotion and energy out of your voice.”

DBC: The excitement is building for the new single, “Bourbon In Kentucky,” co-written by Hillary Lindsey, Gordie Sampson and Ryan Tyndell, hitting airwaves May 28 [the preview clip was released this morning from Rolling Stone]. How did you approach producing this song and what role did you play in selecting it for the first single from the album?

RC: The demo on this song was magic. It was a great road map to build on for the actual record. The decision for this to be the first single was unanimous at the label. Everyone chose it. Very excited for everyone to hear it.

DBC: Have you read our Travis Meadows interview (co-writer for the title track, “I’m A Riser?" What were your thoughts when you first heard the song and how did you help Dierks interpret that through his own vocals? Are you a riser?

RC: I knew that this could be a big song. I was moved when I heard the demo that Travis was singing. I believed every word he said and I wanted to capture that in Dierks. D really owned this lyric and made it his own. We are all Riser's.

Thanks for all your insightful, honest answers, and helping paint the picture of the recording and producing process, Ross! We are looking forward to an emotional body of work when Dierks releases "Riser" in the fall!