Today We Celebrate Our Independence! 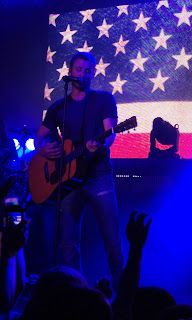 Happy Independence Day! July 4, 2013 will go down in Dierks Bentley history as the day he opened his first bar and grill in his home state of Arizona.  But "Home" means a whole more to our DB Congress president.  His number one single, "Home" talks about our nation's history in a patriotic, yet non-precocious way.


brave, gotta call it brave, to chase that dream across the sea

names, then they signed their names, for something they believed


DB Congress rep from Louisiana, Sylvia Sylva, captured this moment above when Dierks sang Home during theParagon Casino, Marksville, LA show on  Friday, June 21, 2013. "It was my favorite patriotic concert moment of my year," she posted on Twitter.

The song resonates well on a day like today - as we celebrate the independence of America.  GAC included Dierks' "Home" video in their Top 20 Patriotic Songs:


Dierks is drawn to another patriotic anthem, written by Lee Greenwood nearly 30 years ago. “God Bless the U.S.A.,” sure to be heard at many Fourth of July events all over the U.S.


“That song comes on the radio, and my immediate reaction is to immediately, like, turn the channel ’cause I’ve heard it so many times. By the time my hand goes from the steering wheel to the radio dial, like, I’ve already, instead of switching it, I’m turning it up, ’cause it sucks you right in.”

“Getting a chance to travel across the country on a tour bus, stepping up on stages whether it be county fairs, state fairs, arenas, rock bars, the Opry stage, anywhere across the country and looking out at that crowd and seeing people,” Dierks said. “The people, to me, are what America’s all about.”

Dierks, the son of a veteran, shows his patriotism every day, not just on the Fourth of July. “I love this country, and I love the history of this country,” he said. “I read books on this country. I spend my time on the road traveling physically throughout the country. The soldiers and their families are constantly on my mind. We work closely with the Wounded Warriors Project. We think about this stuff all the time."

“My favorite is the table taps where you can just have the waitress or waiter swipe your credit card on your table and there’s three taps of beer at your table. So, PBR, Bud Light, Blue Moon—I’m not sure what they're gonna be,” he said. “And then there’s one of just Fireball [whiskey].

“So, you can sit at your own table, pour your own drinks and watch your money go down on this little thing that shows—a hundred dollars, fifty, watch it go down.”

And Dierks offered a way to say thanks to service men and women, and to salute the 19 firefighters who died in a wildfire in Arizona on Sunday.

"Buy a firefighter or serviceman a drink this weekend, it's the least we can do for the safety and services they provide us. R.I.P. brothers."


it’s been a long hard ride, got a ways to go
but this is still the place that we all call home


it’s been a long hard ride, and i won’t lose hope
this is still the place that we all call home


Dierks will perform at Jam in the Valley in Varysburg, New York tomorrow - July 5, along with Scotty McCreery and Chris Cagle.