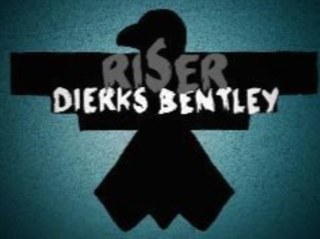 Songwriter Steve Moakler admits at first he didn't feel qualified to write it. But when Dierks Bentley sings his song that he co-wrote with Travis Meadows, Steve says it's like a "gritty, romantic, and empowering anthem."  "Riser" is the title song from Dierks' new album due out in October. Part Two of our exclusive interviews with the Riser songwriters continues with Steve's candid answers below.

DB Congress: What was your reaction when you heard Dierks Bentley was recording your song?

Steve Moakler: I was thrilled to hear that Dierks was recording our song. Initially, I didn't let myself get too excited because I didn't want to deal with the heartbreak if it didn't end up on the record...It seemed too good to be true at first. It still does.

DBC:  What was co-writing with Travis Meadows like? Have you written together previously? What songs?

SM:  I love writing with Travis. To me, he is the most inspiring and authentic songwriter in town. It's always an honor to write a song with him. We have written a handful of songs together. The only one that I'd say holds a candle to "Riser" is one called, "Wide Open." It's on Travis's new record and I plan on recording it on my next one.

SM: I believe our publisher Jeff pitched it to Dierk's executive producer.

SM: He made it his own. His interpretation is bigger than what I thought it could be... It feels like an anthem when he sings it. It's gritty, romantic, and empowering.

SM: Yes, I have heard it. It blew me away. I feel humbled to have been a part of something so great.

SM: It’s exciting how strongly he has embraced the message of the song and wants to inspire people with it. As a songwriter, I can’t think of anything more gratifying than that. Album title or not, it’s really just an honor to have a song on his record.


DBC: Tell us about the backstory –was the song inspired by any specific events?

SM: Travis initially had the idea to write a song called “Survivor.”  He started improvising a bunch of brilliance and asked me what I thought. I said, “Man, I love what you’re doing, but I don’t feel qualified to write this song. I don’t feel like I’ve survived enough to really contribute.” He said, “Moakler, I was saving this idea for you. You’re so damn optimistic, and that's what makes you qualified.” So I listened to him, and then we wrote the song. It's really affirming that he thought of me with an idea like that, and I still hear the song as something to live up to. I feel empowered and hopeful every time I sing it.

DBC: Great use of the “er” turning verbs into nouns like, “a get out aliver,” “no run and hider” and of course, “I’m a riser.”  Did you guys have to dig deep for that or did it come naturally?

DBC: You’ve been described as having indie roots, whose songs you wouldn’t expect from a 25-year old who is quickly emerging as one of the best of a new generation of pop-rock songwriters.   Your 2011 album release, "Watching Time Run," includes "Play You Down" which has a country vibe.  In addition to 'Riser,' is that how you might transition your artistic talent to country music?

SM: You know, I have a lot in common with country music, but I don’t think that it’s the genre that I’ll call home as an artist at this point. I see myself more in the singer/songwriter where there is a different freedom to lean into rock, pop, and folk influences. It’s no secret that country has had a big influence on my sound and writing. I have loved being a part of the writing community in Nashville and have felt really welcomed and encouraged by everyone.

DBC: You're from Pittsburgh, PA, right? What brought you to Nashville?

SM: Since I was 14, I had dreamed about making a living writing and performing my own music. When I graduated from high school, my incredibly limited knowledge and gut instinct led me here. I was enrolled at Belmont University for two years when I first moved to town. I love Pittsburgh and I miss my family, but moving to Nashville was one of the best decisions I’ve ever made.

DBC:   They say everyone has six degrees of separation.  It’s interesting that you have two songs on the movie soundtrack for “October Baby.”  Jason Burkey starred in that movie, and he was also the lead actor in Dierks Bentley’s Tip It On Back video and Ross Copperman (Riser Producer) co-wrote that top 5 single.  And, you’re getting ready for a tour to Germany in July called, “Feels Like Home.”  Now you have the title cut on Dierks’ upcoming album! How well did you know Jason, Ross or Dierks prior to ‘Riser’?

SM: Wow, that's crazy! I had no idea about all those connections. I met Jason at the October Baby debut in Birmingham. He was incredibly kind and down to earth. That’s the only time I’ve gotten to hang with him though.  Ross and I had written a song together a couple of years ago, but we spoke for the first time in years when he called me up and asked me to sing the background vocal on “Riser.”  That was a really exciting phone call... Ross is also super kind and talented.  I still haven’t met Dierks. I was supposed to write with him and Travis Meadows about a month ago but it didn’t work out. I’m really looking forward to meeting him.

DBC:  How much of a chance do you feel ‘Riser’ has to get released as a single and make it to #1?

SM: haha I don’t know... People in town seem to think that it has a good chance. But the more I learn, the less I seem to know. I’m trying not to get my hopes up about it. That would be unbelievably cool.

SM: Jake Owen and Andy Gibson. Kelly Pickler recorded a song of mine a few weeks ago... There’s no telling whether or not its gonna come out or not. I’m still just a rookie at this whole thing. It’s a lot of fun.

SM: I haven’t talked to Dierks yet, but I can tell you right now that I’m gonna say “thank you” in my first or second sentence.

SM: I can’t wait to hear it either! I’ve been hearing great things about it. I don’t have any other songs on the record, but I’m sure that there’s no shortage of killer tunes on it.  Thanks a lot for reaching out and taking an interest in Travis and I. I appreciate the good questions.

Thank you, Steve, for answering our questions and the inspirational songwriting! We think this album is gonna be huge for Dierks!

In case you missed it, here's the video of Dierks singing "Riser" at Last Call Ball in June 2013: