Last week, Dierks Bentley made a lasting impression across the pond. People who barely knew him or his music before his performance, ended up speechless, saying it was the best of the night.  Twitter was buzzing with accolades:


After Dark Country ‏@LucAfterDark Mar 15 I always knew he was a great performer with some great songs - but a whole different dimension to @dierksbentley came out today. #C2C2014

Sam ‏@RSfanUK Mar 15Hard to say this but wasn't a fan of @DierksBentley b4 2nite, maybe hadn't listened to his songs enuv, but now afta @C2Cofficial = Fan4Life!

Eternity Rod ‏@camztweetz Mar 15@DierksBentley I didn't know I would like your music so much live. Definitely the star of the night #C2C2014

@NewCountryUK: How amazing was @DierksBentley at #C2C2014?! A set that phrase 'owned the stage' was made for, @TheO2 loved him!

Flex (@xthefrog) captured one of the best photos of the night.  See all of his Dierks Bentley photos on frogography.com: 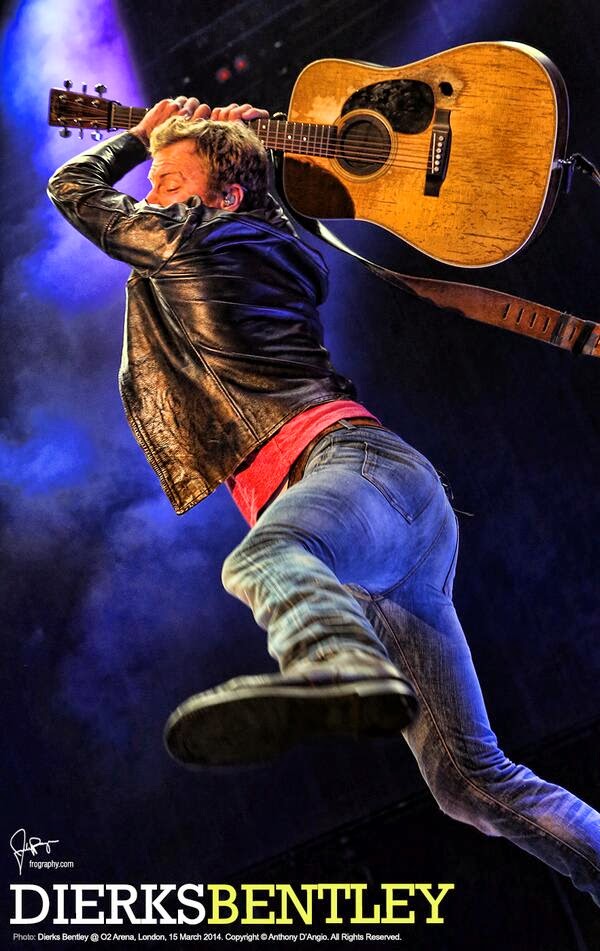 Dierks even covered "Hey Brother" by Avicii and "Wish You Were Here" by Pink Floyd:

Two of our International DB Congress members, Hannah Compton and Sanna Lindgren, shared their Dierks experience with us!

I had a meet and greet for Dierks at the London C2C Festival.  We were all lined up, Fan Club first and then competition winners. The Fan Club were all gathered in a group so that when Dierks arrived he could take a group photo.

Then the man himself arrived. The room went silent and it was like everyone stopped breathing. He was more handsome in real life. He said hello to us all and thanked us for being here and said how happy he was to be in London but that he has done press all day and not yet done any sightseeing. So of course I said, "well, it means you have to come back!" He then asked where we were all from and everyone was from all over the globe. Then it was time for our individual photos.

When it came to my turn, Dierks said he loved my dress and that I looked beautiful which was so nice to hear, especially coming from Dierks.  I could not react any other way than a girly giggle and a shy thanks. He then signed my C2C programme and like a fool I pointed to where his picture was (like he can't find himself) But hey, I was nervous. I asked if he was doing a Fan Club Party at CMA Fest which he said yes so I will be on the look out for those details. 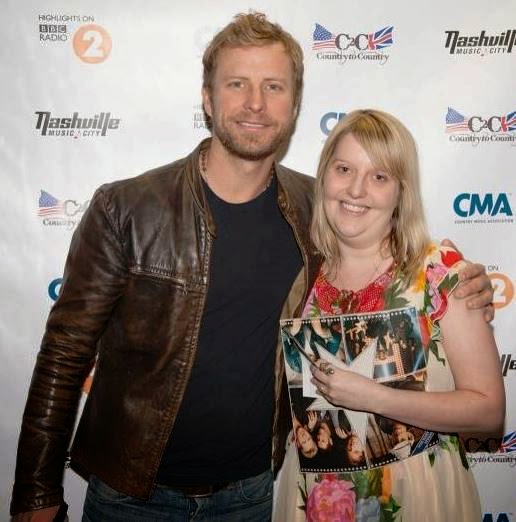 Then of course his show. Are there words? I am not sure there are. He pretty much stole the show. My highlight was I HOLD ON as it is my current favourite and I have been playing it loads in the past few weeks and it was great to hear the story behind it, making the song have a deeper meaning and understanding.

His entire set had the crowd up and dancing and cheering. A few of my friends had never heard his music before and when I asked them what they thought of his show.  One in particular could not even say a word and his mouth fell open and eventually he said, "He blew me away, he was out of this world, I am so impressed, I just cant even find words." This was pretty much the reaction of everyone there.

I am sure I speak for everyone in attendance when I say Dierks, please come back to England, we love you and you have a home here always. Your fan base is huge here and will only be on the RISE.  I HOLD ON to the memories of your show!

Man, was I stoked for the C2C festival. I had been counting down the days since the beginning of October for this day to come around. March 15th – THE day I'd finally get to see Dierks live for the first time. Have been a huge fan for the last couple of years – but have never had the chance to see him perform because of where I live.

Sweden is not exactly the ideal country to live in if you want to live and breathe country music. But lucky enough I've found two lovely friends through Facebook who have their hearts set on the same music genre as me – so we decided to go to this festival together. Time went so slow, but about a week before the trip to London I got a tweet from the arrangers of the festival that I had won a competition and that I was going to get to meet Dierks! I could not believe it! Now I REALLY couldn't wait for Saturday!

And when Saturday finally came around I woke up really early – super excited – THE day was here! Finally! And I knew that the first 50 people who showed up outside the Cinema at the arena would get a ticket to the Riser Screening (the last one and only one in Europe). So off I went and got to the arena the same time as the doors opened – so I went straight to start queuing. Didn't want to miss this for the world! Sat there for about 2 hours patiently and nervously waiting. Didn't dare to be happy just yet – I wanted the ticket in my hand before I could believe it and actually freak out a little.

And that's exactly what happened – as soon as the ticket was given to me, I had to like pinch myself really hard to convince myself I wasn't dreaming – and then the biggest grin spread across my face. Total happiness! Then I went into the cinema, got a popcorn, and sat down middle seat, first row – perfect view.

And about one hour later he finally walked into the room, introduced himself and talked about the film, what it means to him and the story behind it, and then went to sit down at the very back of the room. So naturally pretty much all I could think about while the film was rolling was that Dierks was in the same room. Good thing I had seen it a couple of weeks earlier at the live stream, since I barely could concentrate this time. And after the film was over there was a short Q&A – and then he had to leave for sound check.

A couple of hours later I went off to my next Dierks adventure – the Meet and Greet. At 16.45 it was arranged for the ones that had got a M&G to meet up and get escorted to where we'd all get to meet Dierks. And when we stood in line and waited he suddenly walked up from nowhere with a beer in one hand and said "Oh, y'all waiting for me?” Everyone was shaking hands with him and got the thing they'd brought with them signed, took the picture and then they were off.

When it came to my turn he got a big smile on his face and said ”Wow we've got a Little White Tank Top in here” and laughed. Then he reached out his hand to say hello to me – but I said ”No way dude – in Sweden we hug” and then I hugged him. He said he recognized me from the screening earlier, We chatted for a bit and he noticed the Riser-bird with the Swedish flag that I had painted on the back of my LWTT – and asked if we could take a pic of that one too. So we did. Then he signed it. 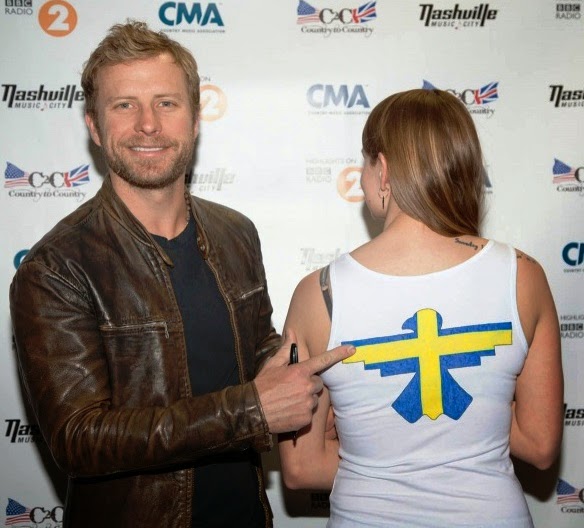 When I was on my way leaving his tour manager Tom grabbed my shoulder and asked me where I was seated in the arena – I explained it to him and he told me he was going to come find me – and then handed me one of the Irish Riser picks from the night before. I also told him to keep an eye open for a Riser banner.

My seat was located at row Q – way too far away from the stage if you ask me. So I went hunting for a better seat and managed to ”steal” a seat on second row instead! And when Dierks walked on stage he spotted me immediately – pointed at me and gave me a ”Yeah.”

Two songs in, I notice someone's trying to get my attention in the front and I walk over there and see that it's Tom again. He takes my hand and gives me 3 UK Riser picks, a smile and a pat on the back. 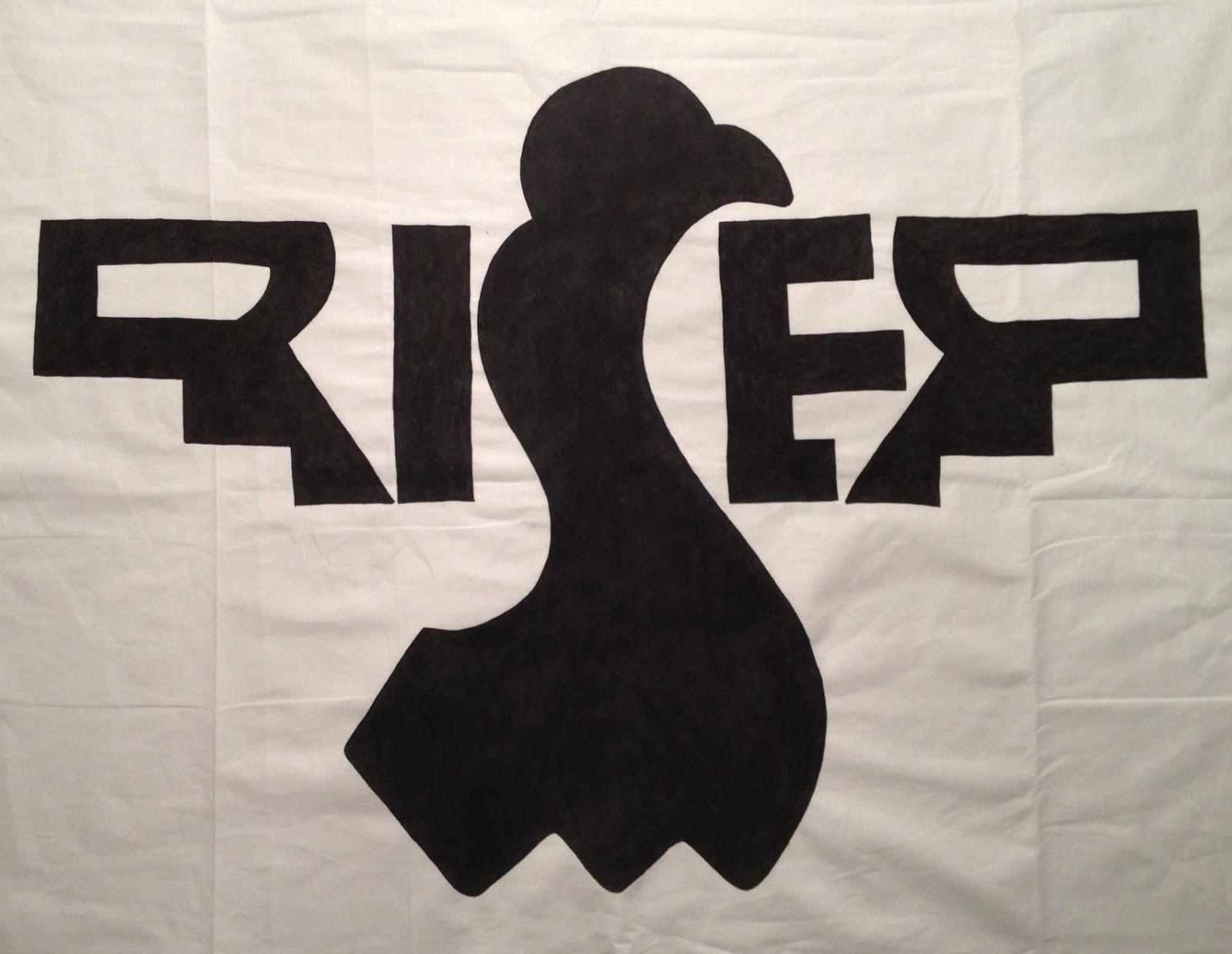 Dierks kept mentioning my little white tank top several times during the 60 minutes he had on stage, and the Riser bird on my back. And I held up my banner while he was singing "Riser” and he gave me two thumbs up. When the time was running out and I knew he only had perhaps two or three songs left to play, he says ”I saw one  little white tank top tonight” (while pointing at me), and I knew ”What was I Thinking” was up next.


He sang the first and second verse goofing around on stage and then suddenly he turned around and started walking towards my side of the stage again, with that walk (like he's up to something) and a determined face and the next I know he jumps off stage and walks up to me and puts one arm around me while singing the third verse --15,000 people were starring at the two of us – and there were cameras and flashes everywhere, but I really didn't pay that much attention to that – hey I had Dierks next to me! 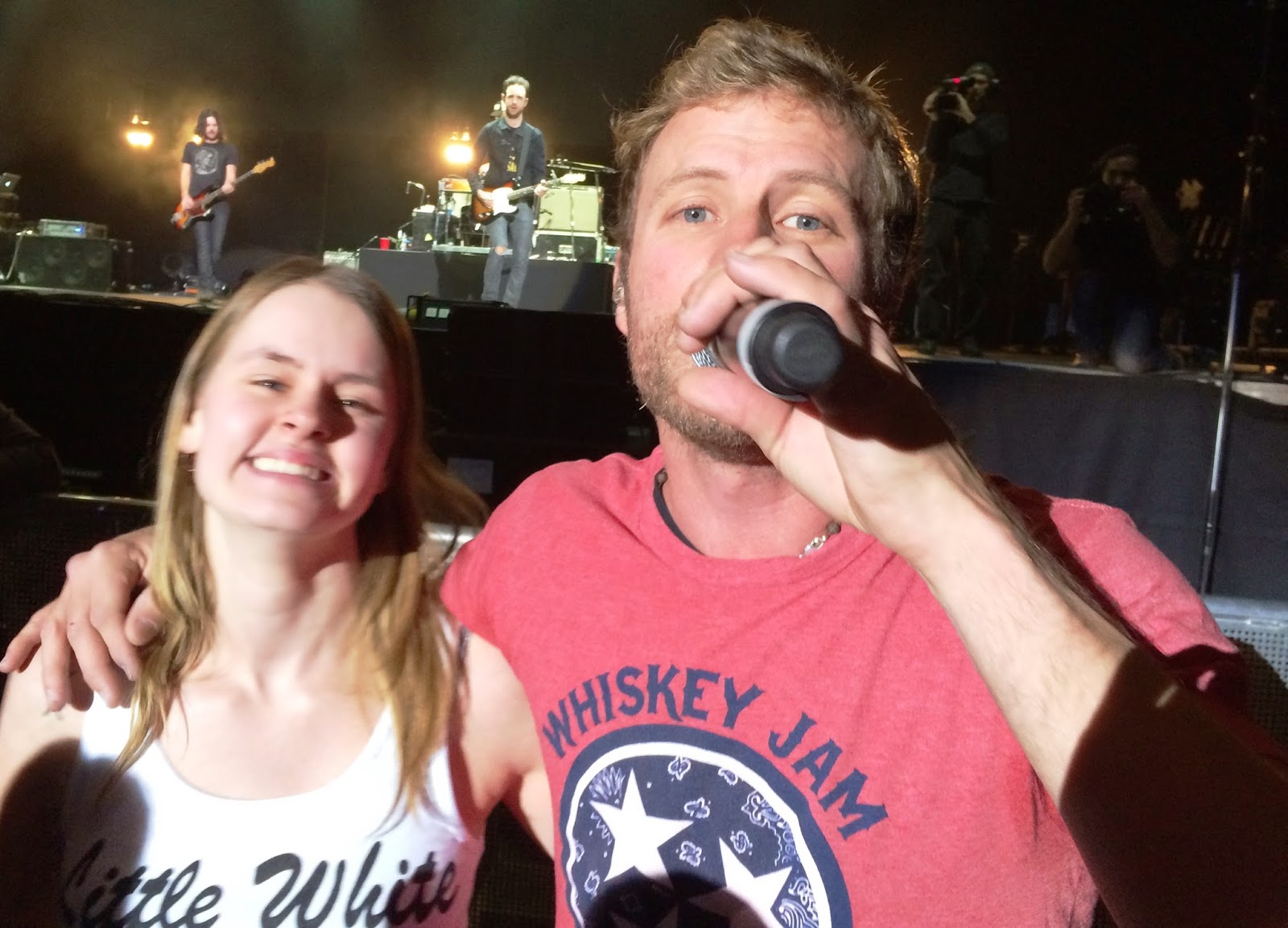 Then he jumps up on my seat and starts high-fiving people – and later on pulls me up with him on that seat. It was just awesome. (And yeah – while I had the chance – I just had to steal one more hug). Then he went back on stage to finish the song and it turned into a party with ”Sideways” before he finished his set with ”Home.”

The noise of the crowd when he first walked out on stage compared to when he walked off was like black and white. Everybody loved him and he definitely gained a lot of new fans that night - he's on everyone's lips! So I hope this was not the last time he visits this side of the pond!