Our DB Congress President had such a busy album release week! We all know Dierks released Riser, on Tuesday February 25th.  He and the guys flew into the Big Apple on Monday and one of their many stops was as exclusive performance for the iHeartRadio Country Live Series at the 200 person capacity iHeartRadio Theater in NYC. 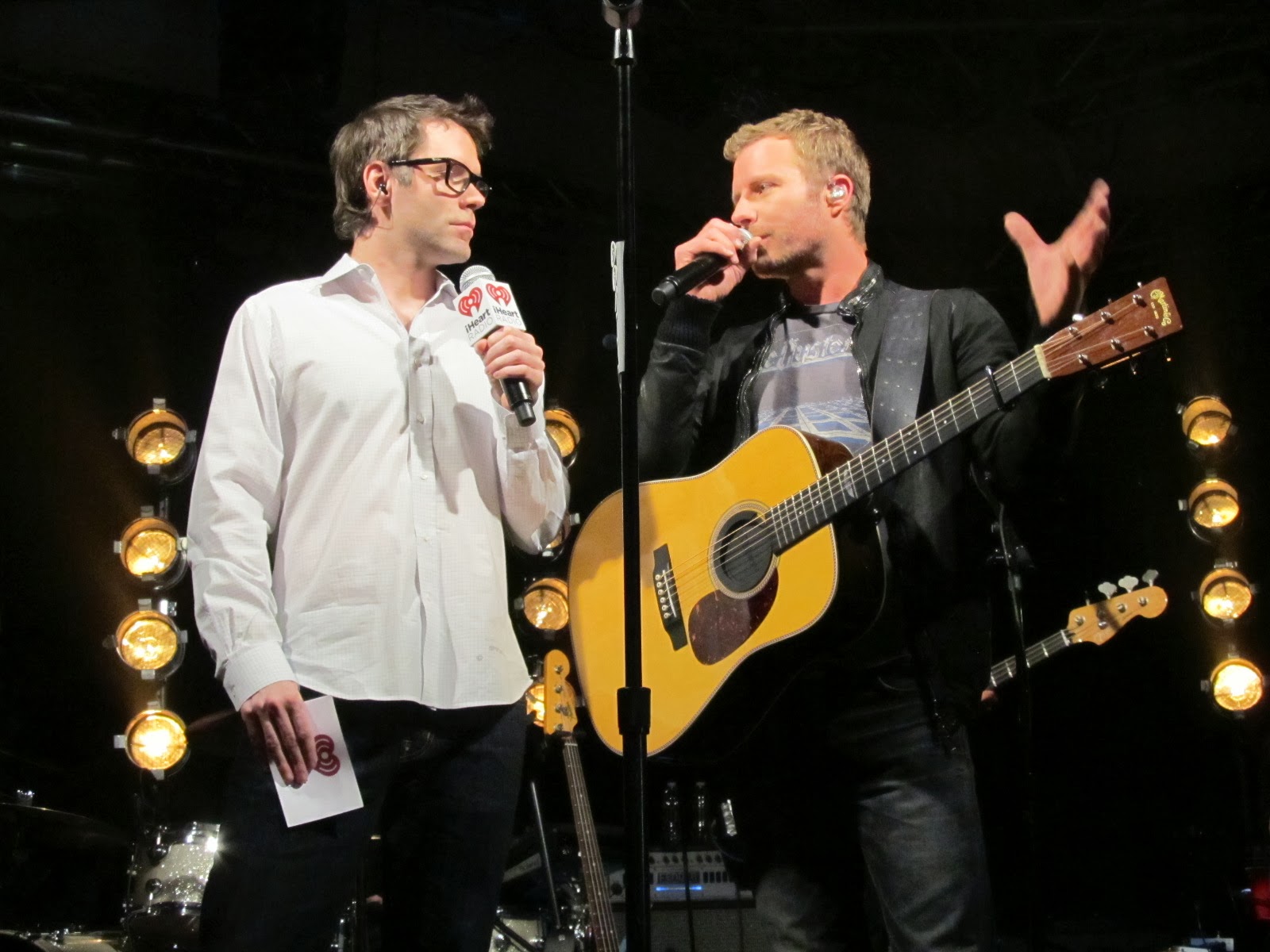 Bobby Bones from WSIX hosted the event which was broadcast live on-air as a thirty minute special on Clear Channel radio stations with a sixty minute live video stream online across station websites and iHeartRadio.com.

The weather in New York City was less than ideal for doing the long waiting in line that we die-hards do. It was super cold with a wind chill that brought the temperature down to the single digits, but we bundled up in multiple layers, gloves and scarfs to withstand the wait because we knew that the good times were ahead. Many thanks to the nice guys who worked the theater for letting us come into the building to warm up by the heaters and use the facilities.

Finally, everyone was allowed to wait inside the building due to the freezing temps. At 8:30 p.m. sharp, they let everyone into the tiny room and we walked quickly to get those coveted front row spots (because really, there is no other way to see a Dierks show). I had previously seen Dierks and the guys in this venue, one of my favorite in the city for it’s size and intimate feel, and knew this was going to be a heck of a show.

For the first thirty minutes, Bobby Bones interspersed questions, anecdotes and humorous banter with Dierks in between performances of songs from Riser. The night started off with Dierks singing the title track, “Riser.” He went on to explain how the record, whose bookends were the passing of his father and the birth of his son, was such a personal one having started in a place of grief and ending in a place of gratitude. Those emotions are not only reflected in the album, but in the Riser documentary, which premiered this past weekend.

Bobby then told the humorous story of how Dierks tweeted out his personal email address. Dierks said he was so excited that his iTunes preorder of Riser (yep, he pre-orders his own albums and don’t we love that about him!?) was available, that he tweeted out a screen shot of it, which accidentally included his personal email. He then received a reply tweet from a hard core fan stating “you’re gonna regret that” and soon his in-box was flooded.

Bobby joked that now everyone knew Dierks’s email was dierkshotboy69@hotmail . Dierks replied that was his other personal address, which had the entire crowd in stitches.

Next came “Drunk On A Plane” which is about a guy who has a broken engagement, but decides to take the honeymoon anyway. It’s a funny, up tempo tune that Dierks said “balances the heavy” on Riser. When the song was over, Bobby commented that the crowd could sing every word back to Dierks even though the record was just released that day.

Dierks acknowledged how appreciative he was that many of his hard core fans, faces that he recognized, were in attendance. He added that he knew many of them lined up outside for hours waiting to see him and the band. He also commented that he has played every part of New York and knows there are devoted country fans all over the state that, like the crowd at the theater, always bring it. 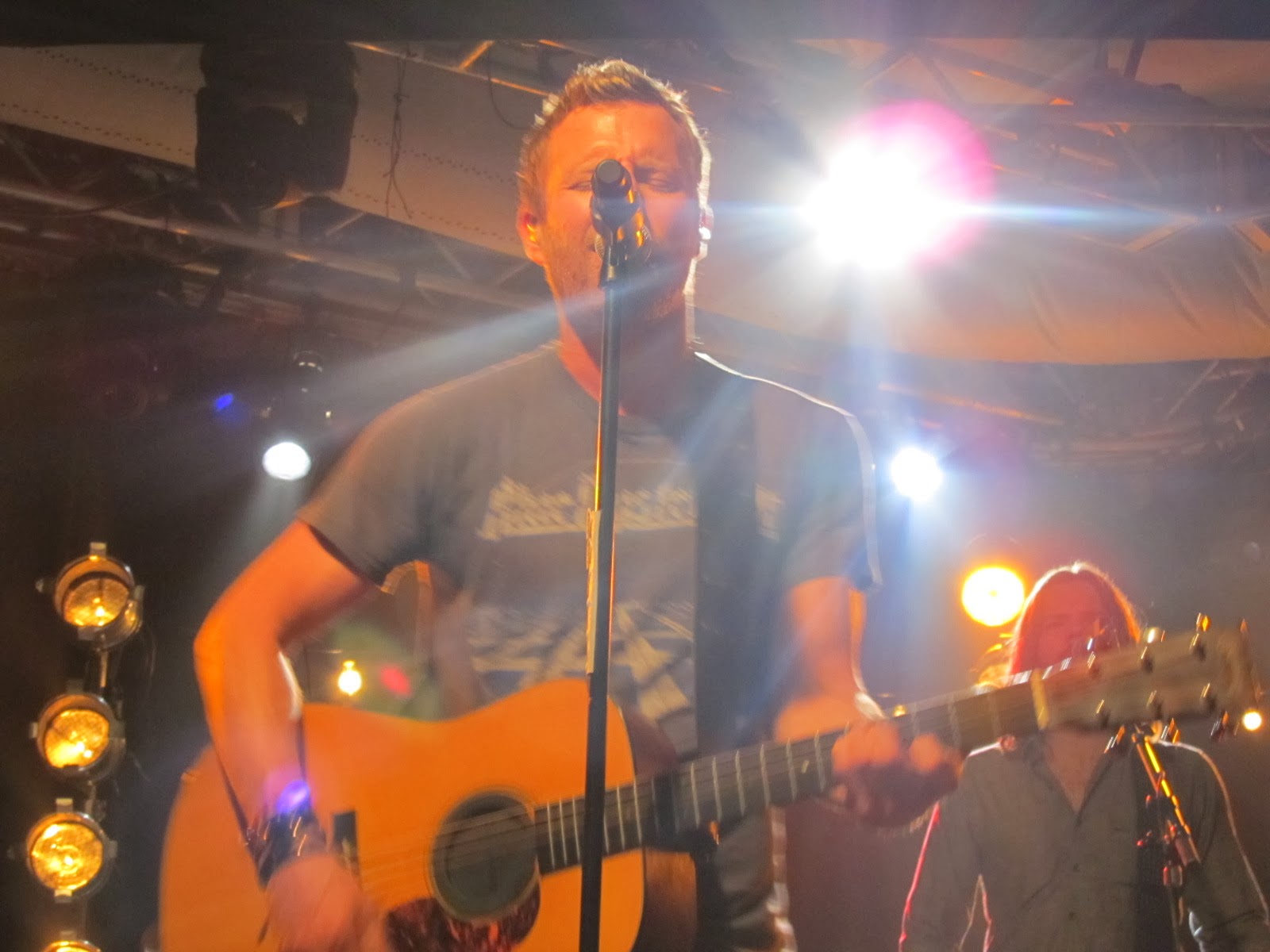 During the performance, Dierks on more than one occasion mentioned his hard core fans, pointing to the front row and beyond, showing his appreciation. We surely don’t attend Dierks’s shows to be recognized by him, but really appreciate how he can make everyone feel appreciated and is just so grateful.

From there, he played his current autobiographical top five single, and Bobby’s jam, “I Hold On.” Then, at Bobby’s request, Dierks and the band went old school when his hairstyle was the “Dierks-fro” and played “What Was I Thinking.” Finally, he played “Home,” sending it out to our military.

The Q&A portion may have ended there, but the music did not. Dierks and the band, which includes Steve Misamore (drums), Cassady Feasby (bass), Dan Hochhalter (mandolin, fiddle, guitar and more), Tim Sergent (steel guitar and banjo) and Brian Layson (guitar) played for an additional thirty minutes. The crowd truly was full of people who loved his music because with every song people were singing along. From “Am I The Only One,” to “Come A Little Closer” (because he “would get shot” if he didn’t sing that song) to “Free and Easy,” the whole room was rockin’ and having a terrific time.

Even though the room was tiny, Dierks and the guys played like there was a much bigger crowd. You could tell they were having a great time with each other, and with the audience. Dierks has an unparalleled energy onstage and even though the stage was tiny, he still goofed around, jumped up and down (that famous 'Tigger-like" Dierks bounce) and interacted with the audience every chance he had.


Additionally, they played an amazing country cover of Avicii’s “Hey Brother” that has been going over so well live that Dierks said they might add it to the Riser tour set list (yes, please!). They also performed a couple more songs from Riser, including “Say You Do,” which Dierks knew fans liked “from reading Facebook comments, tweets, and emails,” and “Bourbon In Kentucky.” Dierks said he knows BIK is a heavy song; it’s one that was written in a time when he was “going through some stuff.” He commented that the song won’t push you up emotionally, but smiling added, “That doesn’t matter because I’m playing it anyway.” No one minded. The fans that filled the room loved that song and, like ones before it, sang along to every word.

Dierks has been known to take chances in his music endeavors and the fans at the iHeartRadio Theater knew that about him and seemed to respect and admire him for it.

The night ended on a high note with “Lot of Leavin’ Left To Do.” The red guitar with the #7 came out and since I knew the night was coming to an end, I was putting the camera away. Then I looked up and saw Dierks looking at me with that look, you know it, when he stares ya down, but he’s smiling. And he’s pointing. Jay comes over and tells me to go up there (I think, it’s all kind of blurry).

However, we were at the rail and there was no way to just get over it. So he says “put your arms around my neck and I’m going to carry you over there.” And there ya go. I am not a person who really likes attention called to them and never thought in a million years I would be on that stage playing that guitar, but surprisingly when I got up there, I wasn’t nervous and didn’t just stand there like a bump on a log (at least I don’t think I did). It’s odd, being up there; it felt like I was with friends having a good time. When I walked over to Dan and said “I have no clue what I’m doing,” he replied smiling, “I don’t have a clue either.” Cassady “jammed” with me for a little bit and then Dierks had me doing some sort of dance in unison with him and the guitar. There was a lot of laughing and a lot of fun. See the video here. 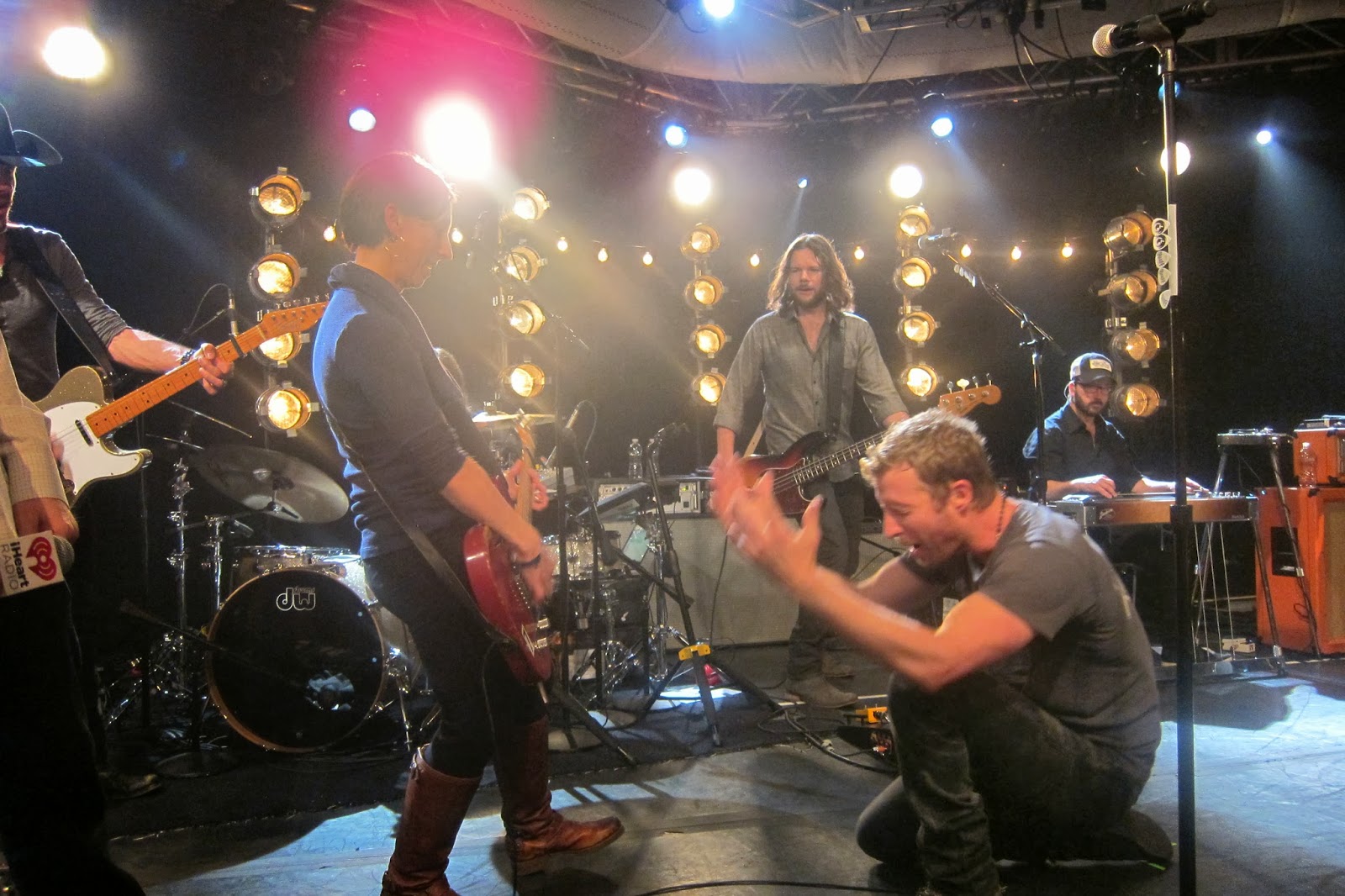 Thinking about it gets me kind of emotional because…wow…they are just such a great bunch of guys. I am so proud to be a fan of such an amazing group of people. Thankfully, since I can’t remember every detail of being on that stage, great friends took a video for the entire thing. It felt like I was up there for an eternity, but that’s not a bad thing! Thanks Dierks and the guys for making my 40th show one I will never forget!

Gracious as always, Dierks signed shirts, photos and hoodies on his way out of the theater.

Dierks’s Riser will certainly be a contender for Album of The Year at all of the award shows this year.  I’m sure you have a copy, but get another because, as Dierks said that night “you can have one to listen to and one as a coaster for your beer.”