Dierks Bentley's "Riser:" A Personal Reflection of His Life 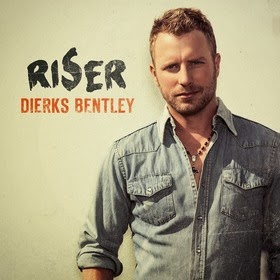 Dierks Bentley’s first release in two years, Riser, is being called his “most real and personal album yet.” After experiencing significant life events within two years time, the passing of his father and the birth of his son, Dierks returned to the studio, and recorded on the road, an album full of reflective, emotional and mature songs.

If you are looking for a record full of songs like “5-1-5-0” and “How Am I Doin’” be prepared for something different. Dierks writes in the liner notes that he “started writing and recording in a place of real grief and ended in a place of true gratitude.” The album encompasses a variety of moods from solemn to sad, and inspirational to joyful.  Throughout the record, one hears Dierks’s gravelly vocals, perhaps at the best they have been, pouring emotions into every song.

Riser is ballad heavy, with even the lyrically “lighter” songs showcasing a mellow, scaled back sound. The album contains twelve songs, including his current autobiographical top five single “I Hold On.” The album starts off with the dark, Kacey Musgraves assisted, “Bourbon in Kentucky” then moves onto the sensual, yet melancholy, “Say You Do.” In it, he pleads, begs even, for that one person to say yes for a night because he wants her back so badly. “Well, couldn’t you say you do/Say you might for tonight/Have a heart, bend the truth/Even if you don’t, couldn’t you.” In the same vein is “Hurt Somebody,” which closes out the album and on which Chris Stapleton assists on background vocals. In it, he knows that the woman with the “red lipstick like a smoking gun” is “gonna hurt somebody” but says “God, I hope it’s me.”

Prepare a box, or two, of tissues for “Here On Earth” which Dierks co-wrote about his father and the Sandy Hook shootings. Anyone who has experienced the pain and struggle of losing someone will be affected by this song. And even if you haven’t, there is no doubt this song will touch you.

Then, keep the tissues handy for “Damn These Dreams.” The song juxtaposes the thrill of living out his musical dreams with the pain of having to leave behind his wife and children in order to do so. It serves to remind us as fans just how much Dierks sacrifices to be on the road and perform for us.
If “I Hold On” is the first chapter in an autobiography, then “Riser,” written by Travis Meadows and Steve Moalker, would be chapter two. It is an emotional anthem for any one who has experienced a strain or hardship and managed to pull through.

“Sounds of Summer” and “Pretty Girls” lyrically lighten the mood of the album, although the melodies are still “chill”. In the latter, he sings about having nothing to do in town when the sun goes down except “watchin’ pretty girls drink tall boys/swingin’ their hips to a country song/silver cans up in the air.” The former, with its mandolin infused background, vividly paints images of that season we all look forward to with its tractors, kids playing, fishing and a cooler in the truck.

“Five” takes a look at the urgency a first love brings and how reconnecting with that person after years is possible.

“Drunk On A Plane” infuses humor into a song about trying to drown out the pain of a broken engagement while drinking one’s sorrow away in the clouds.

“Back Porch,” a song originally on the Country and Cold Cans EP (although slightly re-worked here) brings twang and funk to the album. The song has hit summer single written all over it.

Riser is an unhurried record that takes you through a myriad of emotions. It will undoubtedly be appreciated by Dierks's hard core fans and anyone who likes lyric driven country music. It's pretty perfect.

Email ThisBlogThis!Share to TwitterShare to FacebookShare to Pinterest
Labels: Back Porch, Bourbon in Kentucky, Damn These Dreams, Dierks Bentley, Drunk On A Plane, Here On Earth, Hurt Somebody, I Hold On, Pretty Girls, Riser Review, Say You Do, Sounds of Summer