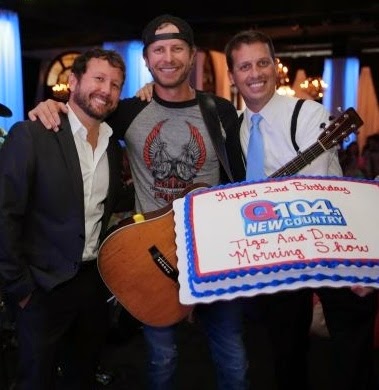 Now I don’t know what Tige and Daniel did to get Dierks to host their party, but as a diehard Dierks fan, I am so glad that they were able to get him.

The stage was set up with four stools for the acoustic performance. In the front was Brian Layson (lead guitar), Dierks Bentley (guitar/host), Dan Hochhalter (fiddle/banjo) and hiding behind Brian was Cassady Feasby (bass guitar). I must say I was sad when I didn’t see Steve Misamore or Tim Sergent, but Dierks, Cassady, Brian and Dan did an amazing job on stage. And before I go on, it was good to see Jay & Carlos running back and forth from backstage to the stage.

Dierks took the center stool and began by talking to the audience. He first thanked Tige and Daniel for allowing him to perform at their birthday and thanked all of us for attending (granted the majority of the people there won tickets via the radio station). Dierks, being the jokester that he can be, told a few jokes and changed Tige & Daniel’s name so many times I lost count. A few times during  the set, Dierks would be telling stories, and getting the crowd laughing so much, that he had to look to Brian and say, “what key does this song begin in?” And Brian would have to say “dude, how many times have we done this song?” 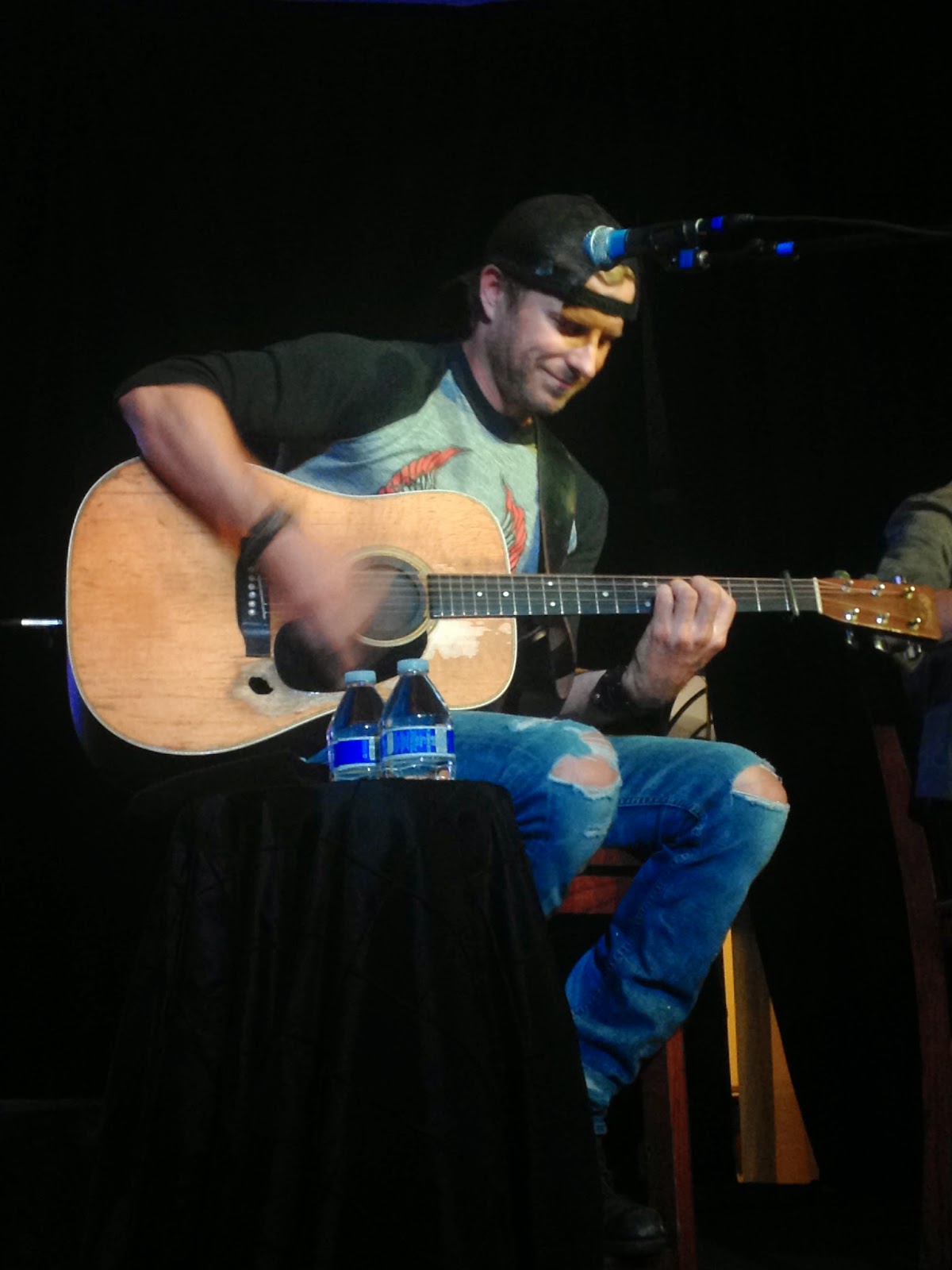 About half way through the performance, Tige & Daniel’s birthday cake was brought out and Dierks led the crowd in singing “happy birthday” to them. Afterwards, Dierks took a picture with Tige and Daniel and he put his backside to the audience, and said he was going to pull a LukeBryan. With us being in North Carolina, the first thought I had was “no Dierks, don’t fall off the stage!” Instead, Dierks said, he wore the tightest jeans he owned.

Dierks performed a few more songs, then talked about how he was honored to be at the birthday bash this year, and that he didn’t know how Tige and Daniel got the hosts they did, but that since they had Luke Bryan last year, and him this year, it would be hard to top next year, but if they couldn’t find anyone next year, that he would come back. Personally I think that is a great idea!

After performing 10 songs, Dierks finished the night off with Home. He dedicated it to all the service men and women. When Dierks finished Home, he looked at me and tossed me one of his new guitar picks. Afterwards, the radio station thanked Dierks again for coming out, and invited everyone to celebrate with the cake and other food. 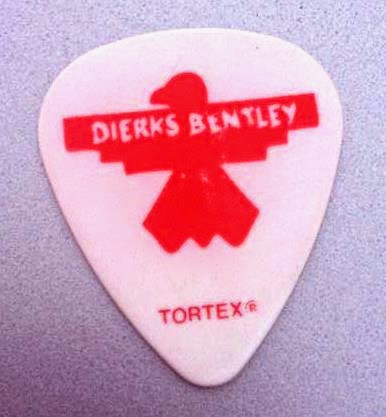 As everyone was walking away, I yelled up at Brian, and asked for his set list. He picked it up, and said “here ya go.” I told him thanks, and my friend Jessica and I began to walk away. Several other people there tried to get the other set lists from Dierks, Dan and Cassady, but they had no luck. So I have to say I was happy I got one. Several people then asked me how I knew the band, and before I could say much, my friend Jessica replied, those guys are like her extended family. And I have to agree with her. 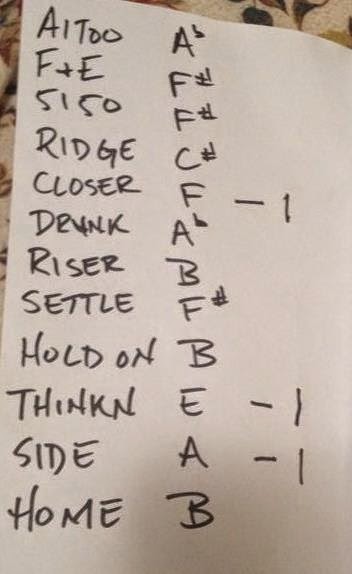 So after getting my set list and guitar pick, Jessica and I were on two missions. One of which was to get our own individual photos with Tige and Daniel (we got pictures with them together as we walked in) but we wanted solo pictures. And mission number two was to try to say hey to Dierks and the guys and try to chat with them for a few minutes. We found out that Dierks was having to jet off to another show for the next day, and wasn’t going to be able to meet with anyone after the show. Of course this made me sad, but I know that Dierks has a very busy schedule.

Jessica and I left the venue, and walked down the sidewalk in hopes of getting a picture of Dierks leaving. We saw his jeep and the tour bus (unfortunately it was not Goldie). Then we saw the guys get into a white SUV. As they were pulling out, they exited through a gate that was near where Jessica and I was standing. I had brought Dierks a card, and he had the driver stop and he reached for it. He told Jessica and I both hey. And said, see y’all girls again soon.

So despite not getting to hang with Dierks and the guys after the show, it was amazing to have been there and get to see the guys perform literally five minutes from my house.

So Dierks may have been hosting Tige and Daniel’s birthday party, but it felt like another great Dierks concert!

If you want to see photos from the event, check out the album here:

Watch the tiny couch interview with Dierks, Tige and Daniel below.