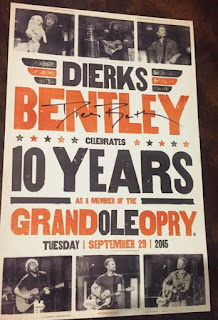 Dierks Bentley celebrated his ten year anniversary of being a Grand Ole Opry member (October 1, 2005) by performing the Tuesday night Opry on September 29, 2015. Some DB Congress were there in person and some were listening online and captured the 30-minute closing segment on audio, transcribed below.

"This is a special night for him,we're gonna recognize that along the way, 10 years of Opry membership for a fellow who, and I'll share more of his story, the backstory to what I'm about to tell you, an incredible award winning singer and songwriter, 3 consecutive #1's off the critically acclaimed album, Riser, I Hold On, Drunk On A Plane and Say You Do, his 6 previous studio albums sold more than 5 million copies, he's notched 13 #1 singles, 12 Grammy nominations, countless CMA, ACM and CMT nominations...Would you welcome, Dierks Bentley, would ya? On his 10th Anniversary!"

Song #1:  What Was I Thinkin': "I was thinkin' tonight's the 10 year anniversary of me being a Grand Ole Opry member and I was thinkin' that's pretty cool!"

Dierks:  10 years y'all...this is crazy!  I'm not used to doing that song first, usually save that one for later in the set, but tonight we're doing everything backwards going back and doing songs off all the albums I've had...taking a trip down memory lane, That was off my debut album, gonna do one off my album Modern Day Driffer...driffer? What's a driffer?  Modern Day DRIFTER.  Let's do a little....

Song #2 Settle For A Slowdown (Video by DBC Rep Jessica Martin, on our Facebook page).


Bill Cody:  Hey Dierks,  (Hey Bill), Let's celebrate 90 years, and your 10th anniversary, you've been here, except for the first 80, you've been here for all of them!  (Dierks laughs).  If you'd make your way over to the podium I have something for Dierks tonight...in celebration of the Opry's 90 years and his 10 years of membership, a piece of art we had commissioned for special milestones for all of our Opry members.  It will hang backstage and we have one for him to take one home...there will be a whole wall of those backstage eventually.

Dierks:  Thanks, Bill.  Love this guy, love listening him in the mornings...one of the best things about being in Nashville having 650 WSM...such a great way to start the morning.  This means a lot to me.  I don't have any gold plaques at my house, I don't want my kids around all that stuff, but I do have my Opry microphone that's always there in the kitchen.  My kids know what the Grand Ole Opry is, and this is gonna be up in my house, too.  The Opry is my home, I've been on the road the last 12 years but this is home here and this means the world to me. Thanks, Bill.

Bill: He's got more!  Dierks has invited some special guests to join him on stage:

Dierks:  These guys' (Dailey and Vincent) 90th time playing the show, for me to have the two kinds of music I love, bluegrass--I'll forever be a fan and a student, and to have these guys represent, and to have my friends, The Cadillac Three representing that rockin' country style kinda completes the circle for me.  A couple years ago I decided to leave the country music treadmill and I made a bluegrass record...nice slow song for you guys...just kidding.  This is about as fast as you can play a song, this is a song from my Up On The Ridge record.

Dierks:  Dailey and Vincent, y'all!  One of the greats in bluegrass and music in general!

The number 10's big for me right now...my 10th anniversary here at the Opry, we'e been married 10 years this year, but this guy right here, he was here 10 years ago, I was driving away from my house today and I was like you know Jake was here 10 years ago and I gotta bring him back out, so ,...he's 15 years old but he's still here,...he can't hear ya...he can probably see you clapping, he appreciates that...Jake, Jake, JAKE, JAKE?...Trust me, 3 kids under 6 it's a blessing he doesn't hear...he's the only one in the house sleeping...special night to have him here with me, place we all call home here at the opry not just us humans, but us dogs, too.  One more time for Jake and for you guys for making this our home.

Speaking of getting married, the most special thing happened before that, back in 2005 Pete Fisher and everyone at the Opry was nice enough to let me come out here and surprise my wife...it was on a Thursday, and Cassidy said 'why are we going to the Opry on a Thursday?' well there's a special show going on I want you to see... I had her totally fooled and we got out here and they had a little table set up right on the circle of the stage in this old wood where everyone stood and had dinner a couple nights before I was inducted into the Grand Ole Opry, so this place will always have special meaning for me and just to be part of this great club of the Opry means so much to me.

So we're going to do a song off the record after my UOTR album...Home kinda speaks about...my dad was a WW2 veteran and all the guys that fought for us and sacrificed for us and to make this home what it is.  I started writing this song...it's really hard to write a patriotic song in 3 and a half minutes, but it just always finds new meaning for me and I hope you all can find something out of this song you can take home with ya.

Thank you guys for making us feel so at home tonight!

Bill Cody:  Hey Dierks' we got more to help you celebrate your 10th anniversary.  I wanna recognize Dierks for the work he does for this community--The 10th annual Miles and Music for Kids event sold out within 30 minutes....that's an ongoing part of his life.  And what you may not know...he's one of the few members who was actually banned from being backstage at the opry.  During his early days here in Nashville, Dierks had a job as a researcher for The Nashville Network--you guys remember TNN? And he reported for work just across the way from the Opry house and of course he was in town to be a singer and he had a habit of showing up backstage and gaining access by using his employee badge, flashing his pass and gettin' in and making himself at home.  Until the Opry Vice President and General Manager of who he spoke so highly of earlier, Pete Fisher, limited his backstage access--would that be a kind way of saying it? What did he tell you?

Dierks: Uh...he sent an email back over to TNN saying 'hey we really like Dierks--nice guy, appreciate his enthusiasm for the Opry, but he just can't show up every Friday and Saturday night and hang out backstage...maybe once a month.'

Bill:  October 1, 2005, Dierks was welcomed as an official member of the Opry family.  We celebrate that tonight.  Now he has the ultimate backstage pass, doesn't he?  And a fellow who has had one of those for 54 years, he's in the Country Music Hall of Fame...Whisperin' Bill Anderson has something for ya, Dierks, on your 10th anniversary...

Bill:  I love you pal and congratulations on ten years...you're gaining on me I've only been here 54. You'll catch me one of these days.

Dierks:  If I could keep writing songs like this guy---every decade he's had a hit --we all look up to you as songwriters."

Bill:  Thank you, that's very kind of you, but we're not here to talk about that.

It's really a milestone for somebody to have spent 10 years as a part of our family and this is a family...a very special family...and you told me backstage that you're taking some time off the road this fall...I hope that means we're gonna see even more of you out here on the circle...

You came here Dierks at a great time... to get to know some of the great legends. Unfortunately a lot of them have passed away including this man...Dierks, this is a picture of you and Little Jimmy Dickens on the stage and he's got on headphones and you look like you're not wanting to listen, that is a classic picture. What can you tell me about when that was taken and where?

Dierks:  That was back stage here at the Opry, we were goofing around, we did all sorts of little skits, we had a car were driving around in and on this one we were pretending we were cranking up some music...probably had some Hank Williams on there.

Like all the great Opry members he's a guy who could entertain the crowd.  We all aspire to be like him and I miss him.  It's tough to be out here without him...I'm taking this home with me.

Bill:  Take this home to your kids and let them know their dad hung out with Little Jimmy Dickens, one of the true greats.

Our Opry General Manager Mr. Pete Fisher is in LA, I guess since I was the senior Opry member here tonight, they asked me to do this, and what a great honor it is.  Dierks, we're proud of you, this is a plaque that says:

That makes it official, congratulations, Dierks!

Dierks:  That really means a lot ya'll may have to break my ban of hanging stuff on the walls cause that's gotta go up somewhere in my house that's really cool....the guys in the band they share this with me."

Then Dierks introduced his band:  Brian Layson, Dan Hochhalter, Cassady Feasby, Steve Misamore, Tim Sergent.  "They all share in this."

Bill:  On your 10th anniversary ,we can't let you get away without one more song.  Congrats and I hope someday you can stand here and do this for somebody celebrating 10 years when you've been here for 54!  Thank you, pal!

Dierks:  What do you get at 50 years, Bill? Do I get like a new car or something?

Alright, well this is off the new record, Riser.  This is our new single and probably my favorite song I've ever recorded and I send it out to all the folks who have gone through tough times, are going through tough times...country music fans are the most resilient fans I've ever met in my life and the stories I hear on the road and every town, every show we play I'm always inspired by our fans...and I send this out to some I see out in the front row who traveled a long ways to get here and come to a lot of shows so, it's called, Riser--check it out.

That was for you, Dalton.  God bless you, buddy. Thank you Grand Ole Opry appreciate you guys so much.  Looking forward to working on year number 11.

Bill Cody:  On his 10th anniversary, and 90 years of the Opry.  What a night to be here.  He is a Riser.  Yes he is.  He's Dierks Bentley, everybody!  Grand Ole Opry member on a Tuesday night.  To a standing ovation as you listen to us around the world.  The Opry House is full and they're all on their feet as the big red curtain comes down. 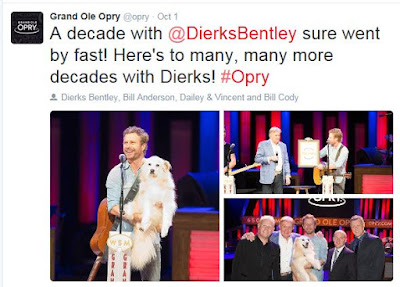