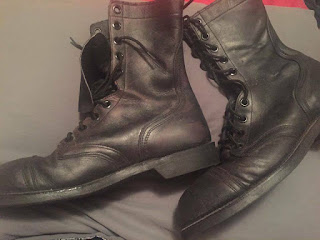 So how do a bunch of fans help celebrate Dierks Bentley turning 40? By buying him a gently-used pair of old boots and lots of duct tape, that’s how!

As you may know, Dierks literally wears his shoes until they're falling apart, with holes in them, applying fresh duct tape before every show as necessary.  He also loves old vintage items, from clothing to cars. So what better present to get him than a pair of  old Vietnam combat boots, complete with several rolls of duct tape for future patching. (Tom and Jay, you don’t have to hide the extra duct tape—Dierks has his own supply now).

The idea to get Dierks new/(old) boots came about after Miles and Music for Kids 2015 and Last Call Ball, November 1.  We knew that Dierks was finally retiring his “Riser Tour” boots from his Instagram post:
Then at Last Call Ball, DB Congress presented him with a gift commemorating his 10th year of MM4K and when we asked him to guess what it was, he said, "A new pair of boots?" (Nope, a specially engraved motorcycle derby).

This gave several DB Congress members a thought…replace the boots.

North Carolina DB Congress member, Adrian Taylor, formed a Facebook group and the plan was put into action. Fans from all across the USA and Canada came together and contributed toward the cost of buying boots and duct tape for Dierks.  Everyone who donated wrote messages that Adrian added to his birthday card.

Meanwhile, during the search for the perfect pair of boots, a local Nashville team was conspiring to arrange a time to surprise Dierks to present the special package.

The plan was to give the gift to Dierks on his birthday (November 20).  However, since this was a big milestone birthday for our President--the big 4-0--Dierks took the weekend off to celebrate. Can't blame him there.

So, ten days later, on November 30th, with the help of  Stephanie from The Green Room PR, we were able to surprise Dierks with his "slightly worn but vintage combat boots." 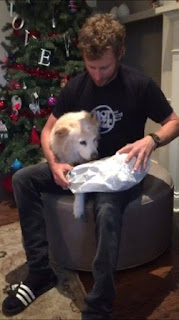 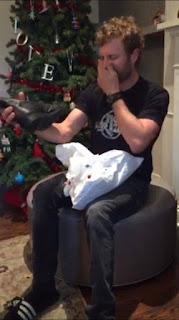 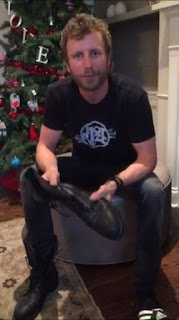 In the video, Dierks is seen with his long time companion, Jake, opening the package. Adrian did the wrapping and wanted to make sure it was a challenge for him to get to the actual boots, "so I used the strongest industrial tape I could find. Sorry Dierks, but we had to make it hard for you!"

"Jake, this is from DB Congress.  This is...so cool...package #1...thank you guys...Whoa! This is...a new pair of boots!  These are good boots!  WOW! I'm actually...I am actually totally shocked because I've been online looking for some new boots...laughs....wow! These are...I mean...I am shocked! These are some really nice boots!...WOW!  Let's give 'em a shot! Gosh...I mean I think they fit...I think they fit pretty good.  The old ones need to go away. I mean it's like a really, perfect fit.  Such a nice gift, y'all.  Thank you guys so much! These are great boots! I'm shocked! Thank you so much!"

You don't have to look any more Dierks!  These old boots still got a lot of ground they ain't covered yet!

Thank you to all who helped make this a special 40th birthday for Dierks!  He really seemed to be surprised and according to Stephanie after the video ended be kept complementing the boots saying how nice they were--and they fit perfectly!

Who's excited to see the boots on stage next year?