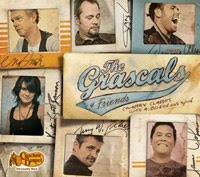 It's typical for Dierks Bentley to sing about trains.  And it's common for him to collaborate with his bluegrass friends, The Grascals (they were featured on Dierks' Long Trip Alone album on the blugrass/gospel cut, Prodigal Son's Prayer).

And it's even more like Dierks to support a project like, "The Grascals & Friends - Country Classics With A Bluegrass Spin," that contributes to a cause to help children.  Now available exclusively at all Cracker Barrel locations and online, 25 cents per CD sold will be donated to St. Jude Children's Research Hospital.

St. Jude is the only pediatric cancer research center where families never pay for treatment not covered by insurance. No child is ever denied treatment because of the family’s inability to pay.

Dierks sometimes sings Johnny Cash's Folsom Prison Blues live in concert, and it's quite a treat for the crowd, as he sounds a little like the man in black himself.  Track Two of the new Grascals CD features Dierks Bentley's baritone, but his verse doesn't include the "When I hear that whistle whine, I hang my head and cry, cry, cry," part that I love hearing him sing on stage.

The Grascals celebrated the #1 debut of the CD on the Billboard Top Bluegrass Albums chart (issue date January 29, 2011).  In addition to Dierks, the album features more friends, including Brad Paisley, Charlie Daniels and Dolly Parton. The track, "I Am Strong," was written by Grascals band member Jamie Johnson and his wife Susanne Mumpower-Johnson along with Jenee Fleenor after The Grascals visited the St. Jude Children's Research Hospital® and were inspired by the stories and power of the children being treated there.
Posted by DB Congress at 10:26 PM