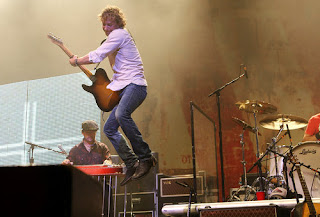 Dierks Bentley may be riding high on the acclaim his bluegrass-influenced Up on the Ridge album has earned — including multiple Grammy nominations — but the country star isn’t resting on his musical laurels.

Bentley and his producer Jon Randall Stewart have set up shop at a recording studio in Asheville, N.C., and plan to start work on a new album this coming week.

“I’m going to use the term kick (butt) to describe it,” Bentley said of his new material. “Everyone is asking me, ‘Is it bluegrass or country?’ I think you’re asking the wrong guy because I thought the last record was a country record with bluegrass influences. The simple answer is it just has a lot more kick. It will complement the other side of my career, the more commercial, fun, rocking stuff.”
Bentley said that while he normally writes the bulk of his own songs, he personally reached into the local songwriting community to find material for the new project.
“I’ve listened to at least 2,000 songs for the new record,” he said. “I feel like a Nashville (producer) right now because I’ve heard so many songs. I get people in my e-mail, where they send me a song and I listen to it on the spot and I send them an answer.”

Don't forget to visit dierks.com starting Sunday, January 30 to sneak a peek at Dierks in the recording process through a 24-hour live video-feed.