Journalist Chris Willman wrote an impressive, insightful article about our DB Congress president's upcoming album. Thanks, Chris! We are definitely serious Dierks Bentley fans and we appreciate you sending us your story and all the great sneak peaks on the songs and lyrics!
Dierks Bentley Talks New Single, Previews Album-in-Progress 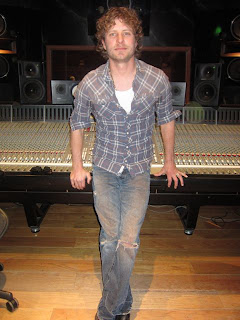 Dierks Bentley recently invited a handful of influential radio programmers to come to a Nashville studio and hear a half-dozen of the new tracks he's working on—and we were on the scene. If you've asked yourself "Am I the only one (who can't wait to hear Dierks' next one)," no, you're hardly alone, and we've got a tantalizing sneak preview of what you can expect when the album comes out in July or August..

Of course, serious Bentley fans are already well aware of the first single, "Am I the Only One," which arrived at country radio this week, and which goes on sale at iTunes March 29. (He's also been performing the tune in concert) Being a party anthem in the tradition of "Sideways," "Am I the Only One" is an obvious choice for the album's leadoff single... obvious maybe to everyone but Dierks, anyway..

"We were playing different songs for the label," the singer explained, "and I hadn't played this one for (Capitol Nashville head Mike) Dungan or anyone yet. I was sitting there with my eyes closed, smiling and singing along with the song and having a great time, when I feel something hit me in the head. I'm thinking, what was that? And Dungan's looking at me and says, 'That's your [expletive] single!... Where has that been? You had me worried, brother!' I said, 'Hey, we're still working on the record!' I'd never had someone throw a book at me. But if you know Mike, that's the way he is—passionate. When the president of your label throws something at you, it's pretty wild.".

Here's something wilder: The other five tracks we heard from the album were even better—even if Dungan wasn't necessarily wrong about the pick for first single..

It seems almost inconceivable that the second single from the project won't be country-classic-in-the-making "Diamonds Make Babies." It's shaped in the form of a warning to a friend who is about to propose to a girlfriend. At some stops on his current tour, Bentley has even been picking engaged couples out of the crowd to serenade them with the cautionary tale. Lyrics include:.

That thing is more than a simple stone.

It's got some crazy powers all its own....

As domestic as this song is, it sounds a little like one of his most famously anti-domestic tunes. "It's got a little bit of that 'Lot of Leavin' Left to Do' sound in the mix somewhere," he said. "I tried to get a little bit of a Waylon thing, with Paul Franklin playing steel guitar again, but also give it a fresh feel." .

Bentley didn't write "Diamonds Make Babies," though; Jim Beavers and Chris Stapleton did. He explained: "This record, I really listened for as many outside songs as possible. Every song I've ever put out to country radio before has been stuff that I've written. I know this is kind of the opposite approach of what most (country) people are trying to do. A lot of people would love to write more of their own songs and have them on the radio, but I'm dying to find some outside stuff. I started writing for this record in October, but my producer and I also listened to thousands of songs. I took my first road trip to Asheville"—the North Carolina city where he's been recording the album—"just to listen to songs for 10 hours. On this album I actually cut four outside songs, that being one of them, which is great, because I just hadn't done that enough.".

Dierks slowed down the pace by playing a couple of ballads in the "Settle for a Slowdown" vein. "When You Gonna Come Around" brilliantly encapsulates the mixed emotions of a guy who's in love with a sweet but wary girl and tiring of waiting for their slow-starting relationship to move from friendship mode into the next gear. "We've never been together, it's just something we talk about," he sings early on in the song, before getting to the crux of the matter:.

I've been waiting with a heart full of love just for you to say it feels right enough.

I've been waiting and I'm wondering when you're gonna give in and just give it up.

Your love is the sweetest thing I have ever found.

So when you gonna come around.

Rest assured that hearts will melt like Hershey's in Tennessee humidity when that one comes around to country radio..

But the same could be said of "You're Still in My Heart in My Head," which isn't any less emotionally primal for being a little more cleverly phrased. "I don't have to be alone tonight," he sings, going on to explain the poignant conditions of his non-solitude: "You never left, in my head... You're still in that T-shirt on my bed/You're ever song that's on/You're gone/But you're in my arms in my head." It's the kind of lost-love anthem that gives mopeyness a grand name..

Next up at Bentley's listening session was "Home," which he described as "definitely my favorite," in spite of—or maybe because of—it having "a little different kind of feel," to say the least. It's the rare non-relationship song in his catalog, unless we're counting a man's relationship with his country (as in nation, not music). He wrote it with ex-Semisonic rocker turned high-end song doc Dan Wilson, who plays guitar and piano on the track. Bentley said that he was thinking of the way an act like Mumford & Sons might write about their country, "although theirs is a lot smaller" and possibly easier to get a grasp on..

"In my home state, in Tucson, that shooting tragedy had just happened. I was thinking about it all the time, in the back of my head. It's slightly connected to that, in a way," he said, although the lyrics about the "blessed motherland" don't directly reference the incident. Sample lyric: "Scars, yeah, she's got her scars/Sometimes it starts to worry me/I don't want to lose sight of who we are...".

But of course Bentley was bound to bring things back down—in this case, with a preview of a song called "Bring It Back Down," which on first listen sounded like a wordier, lighter, and more uptempo variation on "Come a Little Closer." The verses provide a laundry list of contemporary distractions—celebrity culture, talk radio, YouTube, rampant consumerism—while the chorus proposes finding a place to shut all that out: "With nothing but the sound of a whipporwill playing/Let's get lost in the love we're making.".

Bentley hasn't exactly been slacking on the job these last few years, with albums as strong as last year's quasi-bluegrass departure, Up on the Ridge. But as the songs I've been using as comparisons—"Lot of Leavin'," "Slowdown," "Come a Little Closer"—might suggest, his sophomore effort, 2005's Modern Day Drifter, remains a hard benchmark to beat. If the rest of the material is as strong as what he pulled out to preview, this one could shape up as his strongest since then and be a contender for country album of the year..

Getting outside of Nashville for the recording has helped inspire him, he said. Up on the Ridge ended up being recorded largely in New York after a Nashville start, and "it was the last place you'd think of to go to make a country-bluegrass kind of thing," as he points out. This time, he figured Asheville was just far enough away to escape the buzz-killing, too-close-to-home vibe..

"Every time you get to make a record, you appreciate how lucky you are, and I take each one less for granted than the one before. This time, it was so fun to be away from Nashville. I've been here for 16 years, and I love this town. But, and I know it's hard to believe, it really can become almost like an office environment, being in the studio here. Everyone's thinking about their families when 5:00 rolls around. So for this record we went to Asheville and took some of the best guys in this town and got 'em on my bus and drove out there. We got guys who aren't used to doing this kind of thing, guys that get paid triple-scale for sessions, loading in their own gear in this little studio. I really wanted the best musicians in the world playing on the record, but I wanted it in a way that feels like a band. My vocals were done going down with the band. Everything has the spirit of the moment. We'd start at maybe 12 in the afternoon, recording till 12 at night, just hanging out till 2 in the morning and then getting up late—trying to do it the right way, in a little more rock 'n' roll kind of a place. We were going for new sounds. [From the last record] I missed the kick drum, I missed the electric guitar, I missed the bass. I really wanted to throw all that back in there but keep some of those other instruments that kind of define my sound—the banjo the mandolin...".

Taking your esteemed session players to another city, away from their families, to a keg-friendly studio is one way to make sure you're not "the only one who wants to have fun tonight.".
Follow Chris on Twitter at: http://twitter.com/ChrisWillman.
Posted by DB Congress at 9:51 PM

Email ThisBlogThis!Share to TwitterShare to FacebookShare to Pinterest
Labels: Am I The Only One? Album-in-progress, Bring It Back Down, Chris Willman, Dan Wilson, Diamonds Make Babies, Dierks Bentley, Home, When You Gonna Come Around, You're Still in My Heart in My Head