Married Couple-To-Be Come A Lot Closer to Dierks in CT!

If you ever had any doubt about Dierks Bentley's humbleness and generosity--this is the story that will change  your mind. Ryan Miller is a Dierks Bentley Fan Club member (DB Congress) and lives in Stratford, Connecticut.

Ryan Miller's Dierks Bentley Concert Experience
3/17/11 - Wallingford, Connecticut:
Last Thursday, I had an amazing experience thanks to Dierks Bentley in Wallingford, Connecticut. Approximately one hour into his energetic set, Dierks asked the crowd "is anyone out here getting married?" My fiance and I were sitting in the first row so we raised our hands and Dierks came over to us. He handed me his microphone stand and invited us up to the stage where he was sitting. He then asked me what date we were getting married (April 30, 2011), looked at her ring, made a bunch of jokes with us. He then sang a new song to us called, "Diamonds Make Babies". The song was hysterical and had a clear and humorous message. He even handed me the mic a few times to sing a few lines with him. 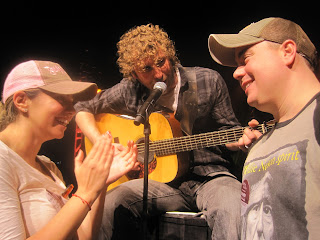 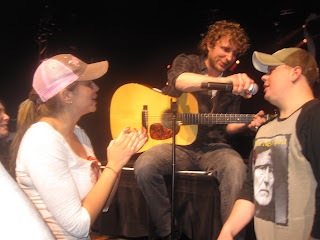 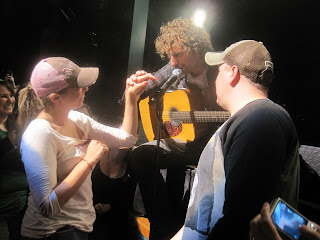 Then during last song of his set Dierks again came over to me and said into the microphone "I'm taking your girl up here, okay?" I, of course, said sure and he pulled her up on stage. At this point he started singing "Come A Little Closer" to her. Towards the end of the song, he gave her the microphone to hold to the crowd and the entire Oakdale Theatre started singing the song back to her. He did this three times on the sides of the stage with her when he suddenly ran away leaving Amy on stage by herself holding the microphone to the crowd. She didn't realize he had run away from her and when she turned around to give him the microphone back, she had no idea what to do. She ran over to me and gave me the microphone and I sang "I feel like laying you down" back to her. He then came back out to save her (and he was laughing hysterically). He then waved to me and I jumped up on the stage and followed them backstage. 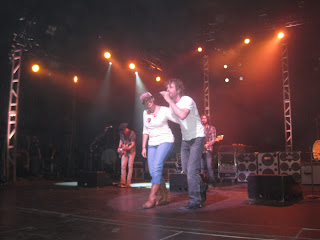 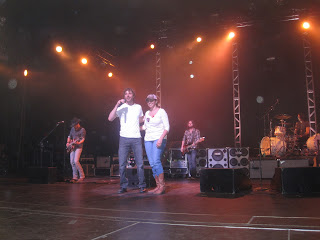 Backstage he took a picture with us and actually said "thank you guys for making that so much fun for me". We responded by saying that he shouldn't be thanking us, that we needed to thank him because it was such an amazing experience. I cannot thank Dierks enough for the once in a lifetime experience he gave my fiance and I. We are truly humbled and grateful for how amazing he is to his fans. 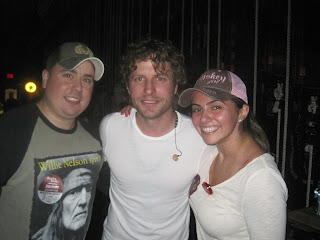 Thanks for sharing your story, Ryan!  We wish you and Amy years of happiness and much "dierksness!"
Posted by DB Congress at 10:54 PM