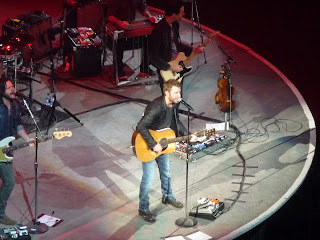 "It all started with a simple tweet and out of it came an unforgettable experience!

Every year the San Antonio Stock Show & Rodeo is held at the AT&T Center and each night there is a free concert following the rodeo. This year Dierks Bentley was scheduled to perform on Saturday, February 25th which happened to be Finals night.  We knew tickets were going to sell out fast but didn’t realize how quickly it would happen.  By the time we decided to attend it was sold out. Imagine my disappointment; Dierks would finally be in my area and I didn’t get tickets in time!

I took a moment to update my twitter that night (Feb. 17th) posting:

“that moment when you order tickets and the screen says SOLD OUT. Saddest day ever. @DierksBentley at the Rodeo. Hopefully I can win some.”


I never expected the reply that followed would actually happen. To my surprise a few moments later I received a text on my phone “@DierksBentley mentioned you on twitter.”

WHAT?! I just stared at the screen and thought to myself I have to be dreaming. Hands shaking I rushed to open Twitter, it seemed like the application was taking forever to load, and as my feed updated I saw for myself the Tweet of the Year:

"@EireneCook: that moment when you order tickets and the screen says SOLD OUT. Saddest day ever.” – just txted my tour mgmr. 2 tix @ will call!”


Did that actually just happen?! Now, keep in mind, this happened in the middle of the night. I couldn’t believe it so woke up my husband to make sure it was real; he looked at it and was just as surprised as me. How was I going to get back to sleep now?

I always knew Dierks was a gracious artist and this solidified my opinion even more. Who knew that of all the tweets he received that night he saw and responded with such an amazing gesture to mine?

The night of his concert was finally here and after receiving a confirmation tweet from Dierks and his tour manager letting me know the tickets were at will call Alex and I headed down to the venue. The box office staff handed me an envelope that read “Eirene – Dierks Bentley Guest.”

After enjoying the Rodeo portion of the evening it was time for his performance! What’s neat about the concert is the stage rotates so no matter where you are in the arena you have the perfect seat. As I expected, his performance was incredible. He performed songs from “Home” and many of my favorites from the older albums. I can’t pinpoint my favorite moment from his concert because the entire evening was too good to be true. Unfortunately, I didn’t have a chance to thank him in person for the tickets but made sure to send him a tweet thanking him for the tickets. If I ever get a chance to meet him I’ll make sure to thank him for the amazing evening! 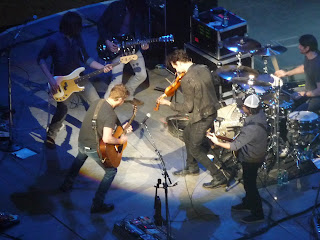 As every Dierks fan knows, his concerts are always a great time. This time the concert was extra special and will always hold a place in my heart, not only was it my husband’s first Dierks concert but we were there because Dierks took the time to notice my tweet and provide us with a night we will never forget. I will be forever grateful to him."

Eirene is a DB Congress member who originally represented Dierks Bentley in Colorado, but now lives in Texas.
Posted by DB Congress at 1:34 PM